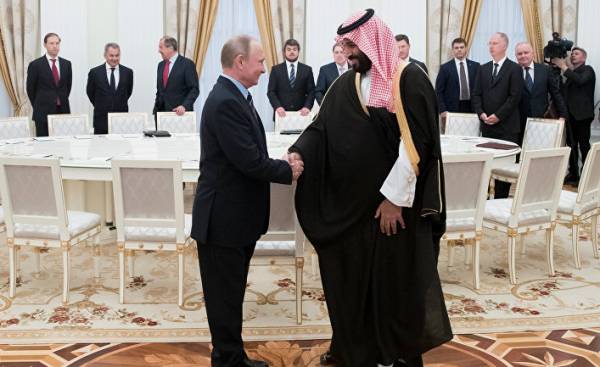 Prince Muhammad bin Salman, who has a lot of connections and, of course, plans to become the successor of his father, believes that 99% of the cards in the middle East hold in their hands the United States. Others, including Russia and China are minor players, and Europe in turn represents only American suburbs.

However, after the conference in Riyadh after Donald trump and his family were in every way treated kindly, and the US delegation returned Laden Bank cheques, money and precious gifts, Prince bin Salman who dream to dominate the middle East, was surprised when he found that the picture is not as expected. Trump, intimidate all at the beginning, abandoned all their promises and, according to sources, said Ibn Salman that game that Saudi Arabia has sought to engage, not so simple, and there should be other forces with the same opinion. In addition, these countries have their own terms and conditions, guarantees and financial requirements. Here Ibn Salman guessed that he needs to spend tens of summits, in order to please everyone.

He immediately heads to Moscow to Vladimir Putin, the second and the most dangerous player in this game, trying to persuade Russian on its side in the question of coalition formation in which the dominant role would be Saudi Arabia. Of course, politically skilled President of Russia could not allow its power to become a toy bought by Saudi Arabia for big money. According to leaked rumors, he proposed to abolish a major deal that Saudi Arabia held with Turkey and associated with the purchase of warships and aircraft carriers, one of the conditions for which Ankara was to support the recent actions of Saudi Arabia in the region. Saudi Arabia thus lost an ally in the person of Erdogan.

According to leaks from the Kremlin, all negotiations Ibn Salman failed. The media reported that the President of Russia has set impossible conditions, which the Prince has been unable to perform. After Saudi Arabia just announced the cancellation of the biggest deals with Turkey, Putin demanded to maintain the position of Assad in Syria that Ibn Salman found an obstacle to their own ambitions associated with limiting the influence of Iran in the region.

Russia’s Ambassador in Riyadh has also added fuel to the fire, describing the Saudi move as “suicide”. According to him, for the Saudis, the global and even regional stage — in many ways much more complex than it seems, and the likelihood is that the regime in Syria will remain, despite the fact that the country is in a precarious political and strategic position for many decades…

The situation became even more a failure when the responsible person of Riyadh asked a question: can Donald trump protect yourself, to protect you?

After all these attempts to push Russia to cooperate, she said that he supports the principle of dialogue between Saudi Arabia and Iran and discussing the issues that cause all these conflicts. Ibn Salman it struck like a clap of thunder and was the first evidence of the failure of the summit held with the participation of trump. The US President has ignored the promises, because today he is concerned about the establishment of relations with the West, which he also can’t fix.