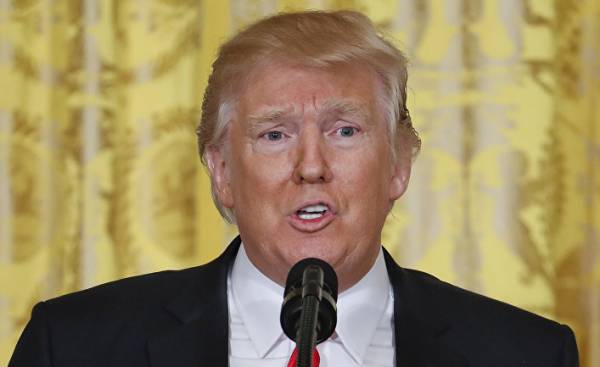 Washington, Moscow , with the Election of Donald trump for President was enthusiastically greeted in Russia, but has caused concern in Europe in connection with his friendly statements about Russian President Vladimir Putin. However, six weeks after the start of the presidency trump the emotional wave changed its direction.

During his campaign and during the transition period, Mr. trump announced a conciliatory line toward Russia, and were critical of the North Atlantic Treaty Organization, as well as other alliances. After taking office, he selected a group of key advisers who propose to pursue a tough line against the Kremlin, and at first it seemed that their approach is contrary to the intentions of the President. Himself, Mr. trump is now in more favorable terms comments on NATO, including that was made in his address to Congress last week.

This shift comes at a time when the administration of Mr. trump’s been heavily criticized due to disputes about secret contacts between the main members of his team and Russia. Publication of information about these contacts has political overtones, given that they were made after the statements of us intelligence of Russian interference in presidential elections in the United States in 2016 with a aim of helping the campaign of Mr. trump.

The presidential term of Mr. trump and his policies are in their initial stage, and some leading experts can only speculate about his real intentions. American experts on Russia say that the President may, before maneuvering negotiations with the Kremlin, the subject of which will be reconciliation with Russia, as well as the General approach to Europe and the Middle East.
Meanwhile, the transition of the presidential administration to unexpectedly tough stance against Russia has caused an applause in Europe and alarm in Moscow.

European diplomats say that the United States is not going to give Eastern Europe Russia and Ukraine through the recognition of the larger Moscow’s sphere of influence.

“We have made significant progress in developing a common position, — said a senior European diplomat, who conducted consultations in Washington last week. — No one has the impression that the United States intend to conclude a large deal with Russia.”

Conversely, the government of Mr. Putin already parted with their hopes for any rapprochement with the United States or the softening of the American position.

“While it is difficult to navigate, said last week the Kremlin’s spokesman, Dmitry Peskov, answering the question about whether it could be considered a good omen for the Russian-American relations recent appointments in the political team of Mr. trump. — Currently there is no possibility to concentrate on bilateral relations.”

Other people in Moscow are concerned that initiated by the Congress checks the contact between Russian officials and helpers trump before the inauguration, he created a hysterical atmosphere in Washington, which makes impossible the cooperation between the United States and Russia.”

“Hysteria in the United States has driven politicians into a trap, said Pro-Kremlin lawmaker Alexei Pushkov in Twitter. — I met with a Russian? The end of a career. I hid it? In jail!”

Key appointees Mr. trump diverge significantly in their views from those provisions which nominated Mr. trump during his election campaign. The Minister of defense of Jim Mattis in a recent speech in Europe, said the United States is not interested in any military cooperation with Russia and that the United States should in any negotiations act “from a position of strength”.

Recently, Mr. trump was offered the position of senior Director for European Affairs and Russia at the national security Council’s expert on Russia Fiona hill (Fiona Hill), which has a good reputation and often criticizes the Kremlin’s policy.

Himself, Mr. trump has stated its strong support for NATO, the organization that he, as a presidential candidate last summer, was criticized. Thus, in particular, the White house supported the accession of Montenegro to NATO, and this step by the Kremlin always refers to an existential threat to its security.

Officials of Montenegro accuse the Kremlin of attempting to overthrow his government in October last year, but Russia rejects the accusations.

A noticeable shift in Washington politics is causing the gloomy mood in the Kremlin. The other day Maria Zakharova, representative of the Russian Ministry of foreign Affairs has sharply responded to a question about whether the appointment of Ms. hill continued Washington’s hard line. “It does not matter to Moscow,” she said.

Mr. Pushkov, Pro-Kremlin lawmaker, said the spirit of the American Senator Joseph McCarthy, grass Russia in the 1950-ies, just in the air.

Mr. trump at a press conference in February criticized then how to cover the issue of relations with Russia. “False reports of the media, is that you do about these terrible, false reports greatly complicate the deal with Russia”, — he said then.

In the opinion of specialists in the United States, a fundamental reset in relations with Moscow is always a challenge, because Mr. Putin, actually wants to do it for internal reasons.

Mr. Putin is waiting for the next presidential election in 2018. Moscow has long been said that the United States is trying to unseat Mr. Putin with Pro-democracy protests, and the Kremlin traditionally increases the wave of anti-Americanism in the country during the election period, when he tries to refute the accusations of rigging the vote.

However, some experts in Washington are sceptical about the likelihood that Mr. trump in the long term, abandon the attempts of rapprochement with Mr. Putin.

“I think reports of the death of the intentions of Mr. trump’s rapprochement with Moscow are premature, said Andrew Weiss (Andrew Weiss), Vice President for science at the Carnegie endowment for international peace, a liberal Washington research Institute. — It was a fixed idea in his foreign policy views, despite the fact that his office and the political establishment are against this.”

Paul Saunders (Paul Saunders), Executive Director of the Center for the national interest, a Washington research organization, said that critics of Mr. trump’s fundamentally mistaken about his plans to improve relations. He also added that relations with Russia may be strained in the short term, in the period when Mr. trump will strengthen the weak, in his opinion, the position in negotiations with the Kremlin.

“When he says he wants to improve relations, then it is very important to do so from a position of strength, said Paul Saunders. — And obviously the Russian won’t like it”.