In Ukraine, together with amounts in the payment grows and the size of the debt for utilities. As at the end of last year, the Ukrainians owed more than UAH 20 billion, in some districts of Kiev, each tenant has a few thousand of debt. The website “Today” found out, when Ukrainians can take the apartment for communal and what to do to not have their property on account of debt.

For debt can get an apartment, a car and a TV

In a typical high-rise building utility bills are not closed every fifth apartment, while not paying the bills not the poorest tenants. Ukrainians, according to the State statistics service, owed more than 20 billion hryvnia. “We have approximately 20% in each house do not pay for utilities, or pay bills part”, – says acting Director Ternovsky public utilities company Igor Zayarny. Public utilities complain, even the Ukrainians with high incomes are not in a hurry to pay the bills.

According to the results of a survey conducted by the website “Today”, 46% of the respondents accumulate debts for communal, another 44% are forced to save in order to cope with utility bills. The survey involved nearly 9 thousand readers.

Amounts in the payment are increasing every month. So, in November 2016 Ukrainian family on average gave for utilities 1156 hryvnia, and in December, this amount had increased to 1,557 USD. It is worth noting that up to 70% of the amount in the payment – heating. And most of the heat is spent on heating the streets – Gcal is lost through non-insulated Windows, walls, ventilation. According to the Ministry of regional development and housing, 90% of all high-rise buildings need to termomodernizacja, on average, this will reduce loss of resources at 60%, proportionally reduced and the amount of payment for heating. To learn more about how to modernize your house.

Accumulate debts for communal not worth it. As the lawyer Alexander Plahotnik, the debtors by decision of a court may arrest any property, and if the amount of debt exceeds the amount of ten minimum salaries, the Executive office has the right to repay the debt to auction only shelter of the debtor.

In may of last year from-for a debt in 50 thousand hryvnias without apartment only remained a resident of Lutsk Alexander Schweiger. “How could pay. Was in Poland two months, November 27, came back, had a plan like this debt to repay,” says the 27-year-old Alexander. One-bedroom apartment sold for 446 thousand hryvnia, “surrender” in nearly 400 thousand to the family of Schweiger has still not returned.

Lawyer Alexander Plahotnik says: Ukraine is a simplified system of debt collection. Any housing office may apply to the court by the debtor, then the decision will be made within three days. The court order on collecting of the property is issued without hearing and without calling the parties. That is, the debtor, which, for example, going to arrest the car, finds out about it only after the house was coming the bailiffs.

Often, after the arrest of the property of the Ukrainians have the time to repay the debt. As reported in the press service of the Zaporozhye enterprise “Urban heating network”, last year on one of the posts in Vasilevka stopped the driver whose car due to debt 3467 hryvnia was wanted. The car was sent to a shtrafploshchadka, and on the same day, the debtor has repaid the debt for communal and paid 10% of the Executive collection.

Service providers submit to the courts and arresting televisions, vacuum cleaners, microwave ovens, speakers, and other property unscrupulous clients. To buy the arrested property on the site SETS. Here “the hammer” goes not only microwave ovens Ukrainians who are unable to pay off the debt for heating, but the apartment bought under the mortgage. For example, now on the website with a starting price of 22 million hryvnia sell vosmikomnatny apartment on the street.

How to save real estate

Alexander Plahotnik notes: service providers are always interested to solve the problem without a trial, for example, make a contract of debt restructuring. “In my practice cases of alienation of the apartment was not. If you already are in such a situation, the debt exceeds 10 minimum wages, i.e. more than 32 thousand hryvnias, it is necessary to conclude the contract of restructuring and to pay in stages,” advises the lawyer.

“In my practice cases of alienation of the apartment was not. If you already are in such a situation, the debt exceeds 10 minimum wages, i.e. more than 32 thousand hryvnias, it is necessary to conclude the contract of restructuring and to pay in stages,” advises the lawyer.

The Statute of limitations for such debt to three years, that is, can recover only the amount accumulated over 36 months. Duty, said the lawyer, does not interfere with the Ukrainians to apply for a grant or use by the government for deferred payments for heating. 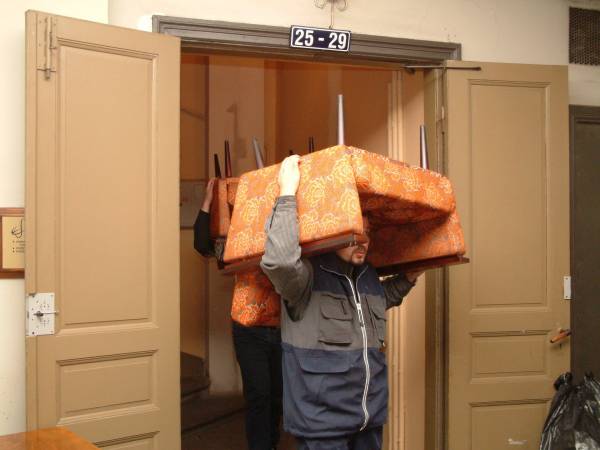 For debt can take any property. Photo: archive

“If not entitled to a subsidy, make installments, then you need to pay for heating all year round, not just during the heating season, but the amount will decrease twice. This will release some of the funds and to pay for debt. If very tight – you need to find a second job. The wrong in this situation is to wait until the service provider will go to court and to the apartment to knock on the staff of Executive service”, – says Alexander Plahotnik.

By the way, at the moment, Alexander Schweiger, who lost his apartment, trying to get the Appellate court to return home. Says that the bills will not pay, as I live together with my grandmother and both of a long period of sick: the guy got injured at work and was in the hospital. “All we could pay. The grandmother of the pension was calculated on 20%. To do not pay, this was not”, – says Alexander. However, the lawyer of the guy, Leonid Romanyuk, sure to return the apartment will not succeed.

Alexander Plahotnik says: if housing has already been sold, to return it will be very difficult. To appeal the decision within ten days. “After the court’s decision will have ten days to appeal. Then the meeting will be held with the invitation of the parties. The risk of losing the apartment is, so to speak, the most irresponsible citizens”, – says the lawyer.