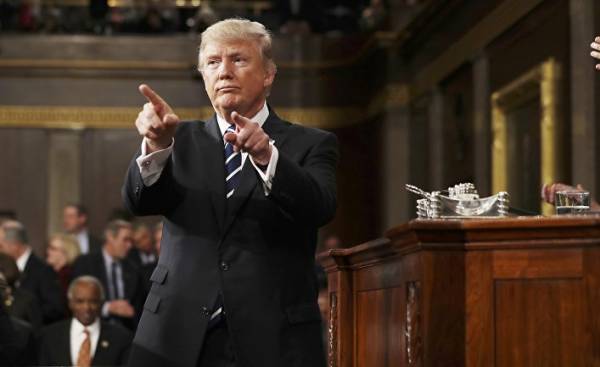 The US President Donald trump, in his first speech before Congress a “state of the Union” (State of the Union Address) announced the intention to send a trillion dollars on infrastructure projects in the U.S. and to change the system of reception of migrants.

In his address to Congress he said the United States will continue to strongly support NATO. At the beginning of his speech, trump said that the American people are United in their determination to combat hatred and evil.

“The recent attacks on Jewish centers, cases of vandalism at Jewish cemeteries and shooting in Kansas city last week remind us that we can be a country that is divided on policy issues, but we remain United in denial of hatred and evil in all their forms” — began his speech the President of the United States.

“Our allies will see that America is once again ready to lead other countries,” said Donald trump. According to him, from this moment begins a new Chapter in the history of the United States.

In his speech, the US President reiterated most of his main theses, which he performed during the election campaign.

The most important tasks of his administration, trump believes the country’s security, fighting crime and creating new jobs.

According to the President, the US needs to change the structure of immigration by restricting the entry of unskilled workers and attracting highly qualified professionals.

However, Donald trump has offered to take a sample of Australia’s immigration policy of attracting those workers needed by the economy.

According to trump, such a system “will save us countless dollars, raise workers’ wages, help poor families, including immigrant families, to rise to the middle class, make it quick and become really very happy.”

The President intends to ask Congress on his plan on investing a trillion dollars in infrastructure projects.

“The United States has spent nearly six trillion dollars in the middle East, and at this time the infrastructure we have destroyed the house. Six trillion we could twice to rebuild the entire country, and maybe three times. To launch a nationwide restructuring, I will ask Congress to approve the bills to invest one trillion dollars in infrastructure in the United States. Funded, these projects will be both public and private capital, thus creating millions of new jobs,” trump promised.

“This plan comes down to two main principles: buy American and hire Americans,” the President said.

Donald trump said that the United States will continue to fully support the NATO Alliance, “born in the two world wars and defeated fascism and communism.”

“We must be active participants in the global policy, and we support NATO. But our partners should fulfil their financial obligations. And I want to say that the money went”, — told the trump congressmen.

Trump promised to cut taxes for the middle class, create millions of new jobs and withdraw from Obamacare, common health insurance, initiated by the previous administration.

Trump believes that Obamacare has failed, and is going to propose a new reform.

“The reform will provide citizens with more choices, reduce costs and improve the quality of medical services. It is necessary to reduce the price of health insurance. And we’re going to do it,” — said the President of the United States.