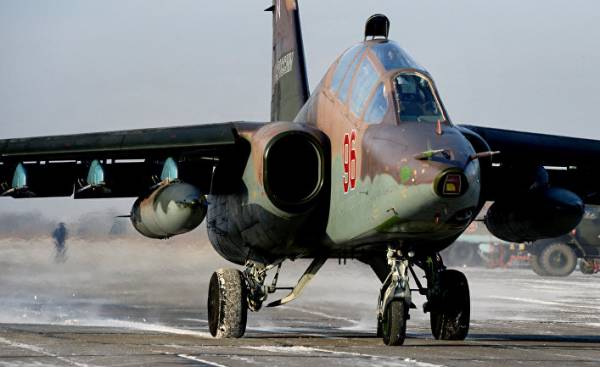 Su-25 “rook” as it is called by Russian pilots, is hardly a sample of the latest technology, but it is still used in many countries as an efficient and useful means of destroying ground targets.

His apparent companion for the purpose is an American attack aircraft a-10 “thunderbolt II”. But if the USAF want to cancel the A-10, starting in 2022, the su-25 modernizarea constantly, keeping pace with the times.

Unlike the A-10, it is widely used all over the world. Su-25 was involved in a dozen wars, including, in air campaigns in Syria, Iraq and Ukraine.

Russia not only has accumulated rich experience of combat missions on the su-25 — she’s also learned how to shoot them down.

During the Second world war, the armored Russian attack aircraft Il-2, called “Flying tank”, was famous for his invulnerability to enemy fire, as well as the ability to inflict painful strikes on the German tank divisions with bombs, rockets and cannon fire.

In 1960-e years the Soviet air force, unlike the American, who was keen on the idea of victory in a nuclear war with strategic bombers, paid more attention to air support of their land armies through tactical aviation. However, after world war II, a worthy successor to Il-2 did not appear for quite a long time.

In 1968, the air force decided it was time to create a new effective flying tank. As a result of competition involving three prototypes of the preference given to the development of the Sukhoi design Bureau. The first su-25 began in 1978 at an aircraft factory in the Georgian capital Tbilisi. American A-10 “thunderbolt” began to come into service a few years earlier.

Like the A-10, su-25 was intended to win the battle of titans between the land forces of NATO and the Warsaw Pact. He had to destroy tanks and infantry, carrying out the task of close air support. This means that the fly he was low and slow, so that the pilots could carefully observe the battlefield and in a timely manner to inflict an attack hit.

Flying at low altitude also helps the su-25 to evade the deadly anti-aircraft long-range missiles, which were actively used in combat in the European theater. But he is vulnerable to fire all kinds of flak. Therefore, the pilots of the su-25 sitting in “an armored trough.” This armored plating with a thickness of 10 to 25 millimeters, which wrapped the cabin and lined headrest of the seat. The plane also armored fuel tanks and redundant control system, which increases the survivability of the machine. But during his long military service, the su-25 repeatedly survive even with very dangerous hits.

Despite the similarity with the A-10, su-25 is smaller and lighter, and the maximum speed he one and a half times higher than that of the thunderbolt, amounting to 950 kilometers per hour. However, the “rook” is less practical range and stay in the waiting area. Ceiling of his less than half that of the A-10. Less than half combat load as the su-25 takes on Board up to four tonnes of arms and ammunition, while the A-10 to eight tons.

Important another point. These aircraft of various types of weapons and ammunition. The thunderbolt uses mostly precision-guided munitions, especially anti-tank missiles Maverick. He also has a monstrously rapid-fire cannon GAU-8.

In the bow of the “rook” at the bottom of a laser rangefinder-designator. In Afghanistan, the pilots of the su-25 was periodically used laser-guided missiles KH-25ML and Kh-29 for destroying fortified positions of the Mujahideen, hitting targets up to eight kilometers. In Chechnya also began to use bombs KAB-250 guided by laser illumination. But overall, this weapon is rarely used. For example, of the total number of bombs dropped in Chechnya, managed munitions accounted for only two percent.

The su-25 has a high firepower to combat manpower of the enemy. This is what was needed in 1981, when he first took part in the fighting in Afghanistan. In the course of this conflict, the su-25 was a true workhorse. Grachi made more than 60 thousand sorties, bombing the villages of the Mujahideen and their fortifications in the mountains. Often they operated in harness with shock helicopters Mi-24 providing air support to Soviet tank divisions.

But when the Afghan fighters began to receive from US Stinger missiles, the su-25 began to incur losses, and Soviet pilots had to fly higher to avoid the fire of these man-portable anti-aircraft missiles. Just before the withdrawal of Soviet troops from Afghanistan there were 15 downed su-25.

After the collapse of the Soviet Union su-25 was transferred to the air force new post-Soviet States. Those countries that did not use su-25 in local wars (such as the conflict in Nagorno Karabakh), often exported abroad. Grachi fought in the armed forces of Macedonia (against Albanian rebels), in Ethiopia (against Eritrea, when one plane was shot down), the Sudan (Darfur against) and in Georgia, which used them against Abkhaz separatists, while losing a few cars. And this list is far from exhaustive.

There was another remarkable episode. The government of côte D’ivoire acquired several su-25 aircraft and used them in the civil war. When President Laurent Gbagbo (Laurent Gbagbo) was outraged by imaginary political engagement of French peacekeepers piloted by mercenaries su-25 attacked the camp of a peacekeeping contingent, the result of which nine peacekeepers were killed. But the one who ordered the attack, did not consider one circumstance. At the airport in Yamoussoukro, which was based “Rooks”, is the French military. They, in return, destroyed the ground attack anti-tank missiles.

Russian su-25 were used during the Chechen campaign in 1994 and 1995, having 5 300 combat missions. In the beginning they destroyed were on the ground of the Chechen aircraft and attacked the presidential Palace in Grozny, bombs. Then the aircraft took part in the bombing. They played a notable role in the second Chechen war in 1999, where he lost only one plane.

By the way, it should be noted that su-25 is one of the few Soviet aircraft on the basis of which in 1990 was created by the American computer game.

In addition to the basic model of “rook” is another export version, called the su-25K, as well as several models of double training planes from the Brokeback cabin, including combat training of the su-25УБМ.

There have been several projects of modernization of su-25, due to which there was a small batch of anti-tank attack aircraft su-25T and su-25TM. But the Russian air force in the early 2000-ies opted for su-25SM, on the basis of which will be all upgrades.

This plane has a sighting and navigation system “BARS” for more precise pointing at the target, as well as new on-Board electronics in the form of indicators on the windshield, receiver of the radar radiation, and so on. Su-25SM can apply excellent missile R-73 “air-air” of small range, and also has advanced equipment for bombs with laser guidance. There are other improvements that reduce maintenance needs and repairs, as well as the weight of the aircraft.

Dave Majumdar (Dave Majumdar) of The National Interest wrote about the latest version of the su-25СМ3 able to launch anti-radar missiles Kh-58, which helps to suppress enemy air defenses. There is a system of electronic warfare “Vitebsk”, increases survivability of the aircraft when firing its anti-aircraft missiles guided by radar and infrared-guided.

Georgia and Ukraine have a limited number of custom modifications. This aircraft su-25KM and su-25M1, respectively. Su-25KM can be seen in neurotoxina video, filmed by an Israeli firm. Frames very serious, in the style of 1980-ies, without the slightest hint of irony.

Speaking about Georgia, the situation turned into chaos in 2008 when Russia and Georgia used their su-25 during the Russian-Georgian war. Georgian “Rooks” provided air support to their troops in the capture of the city of Tskhinvali. Then the Russian su-25 helped his tanks to destroy them. Russia lost three su-25 from MANPADS attacks (two of them could put their). Georgia has lost as much from Russian anti-aircraft missile strikes. But to the surprise of observers, the Russian air force failed to suppress Georgian air force in the sky.

In 2014, Ukraine has sent its su-25 support ground forces fought with separatists rebels in Eastern Ukraine. In may they helped to seize the Donetsk airport, after six months there was fighting with varying success, and ended with the victory of the separatists in 2015. When the strikes on ground targets Ukraine lost four su-25. Three were shot down by missiles (MANPADS one plane, two systems presumably greater range from the Russian territory), and the fourth a Russian MiG-29. Two survived after being hit by missiles. As a result, the air force of Ukraine has sharply reduced the flights of su-25 in order to avoid further losses.

In 2015, the Russian separatists of the Luhansk people’s Republic said that strikes from the air with its su-25. The information is different, and there are two possible options: either the separatists have restored Museum piece, or the aircraft was imported from Russia.

The Iraqi air force in the war against ISIS (banned organization in Russia — approx. lane) used their own su-25, purchased in 2014 in Russia. Seven more units they got from Iran. These aircraft were flown to neighboring Iran to maintain its fighting strength during the Gulf war in 1991.

Finally, in the fall of 2015, Russia sent more than ten modernized su-25SM in Syria to support government forces of Bashar al-Assad. Many observers noted that all involved there su-25 proved to be the most adapted for the implementation of close air support. Grachi made 1,600 sorties, striking rebel-held Syrian cities. They spent more than six thousand ammunition; it was mostly gravity bombs and unguided rockets s-13. Later took them away, and they were replaced by attack helicopters, which perform the task of providing close air support with greater precision — but with great risk to themselves.

What are the lessons presented flying tanks?

You can endlessly admire the fast and powerful fighters such as the MiG-29 or F-22 Raptor, however unattractive the su-25 has played a much more important role in several military conflicts. We can learn several important lessons from their track record in recent years.

First, the significant losses incurred by the su-25, indicate that without effective suppression of air defense systems and electronic protection enemy planes air support with their low speed and low altitude will continue to incur heavy losses from anti-aircraft missiles of Russian production when applied in sufficient quantities.

Second, the analysis of the actions of Russian troops in Syria shows that despite the availability of diverse Arsenal of precision-guided munitions, the Russian air force in the implementation of close air support continues to make a major bet on unguided bombs and rockets.

Finally, the aircraft is able to inflict powerful attacks on ground targets and has a high survivability, will continue to be in demand worldwide.

Sebastien Roblin has a master’s degree in conflict resolution at Georgetown University. He worked as a University instructor in the peace Corps in China. Robin regularly publishes articles on security issues and military history on the website War is Boring.

Scientists told about the shortcomings of men women like 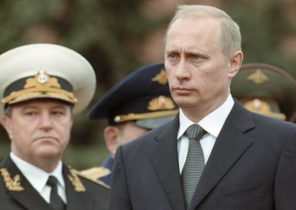