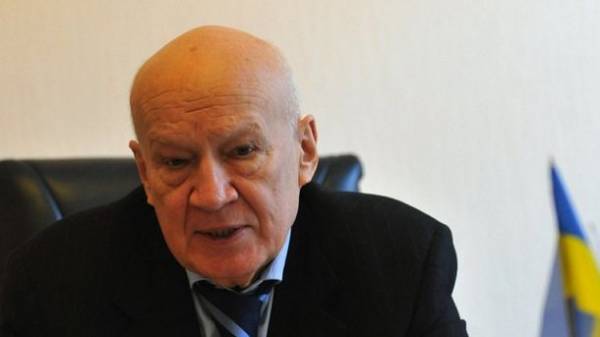 Today, Brzezinski’s theory on the political chess Board is already outdated. In the modern world ceased to play chess, now more popular as simple and brutal games in which requires strength and arrogance. All against all – the world is going to reach such condition. Such opinion at the international forum “the Dawn of Europe: the historical pattern of civilizational choice” expressed the Director of the National Institute for strategic studies (NISS) Vladimir Gorbulin.

“We have to understand that the current crisis is not the end of the civilized world, and only a temporary loss of course and a fair wind. This state trying to take advantage of some provocateurs and kidnappers, but their success is temporary. In the long run they will not succeed”, – said the expert.

According to him, now applies a hybrid war not only against Ukraine but also against the West. Victims of hybrid aggression is not ready to admit that they were victims of a hybrid war. The hybrid scale battle begins to sink only when this understanding comes. A striking example is the United States.
“What was the most important result of the election in the US? It became clear that Russia was ready to intervene and interfere in elections in other countries. 5-10 years ago it seemed impossible. Russia has moved into large-scale offensive, which is generously sponsored by it,” said said.

As the expert noted, the second implication of American elections chaotic in the political space of democratic countries. Today, the United States can not cope with the processes that began last year.

“Intelligence and counterintelligence, the United States show how much Russia has done to affect the outcome of the election, destroy the trust between the political leadership and institutions, and if possible corrupt senior officials. Such a scheme, Russia will use in the future, because organizationally, it is not complicated, but extremely effective. The same applies to Europe, which also falls under attack. Europe used to play by the rules, its position is always open and is based on rational argument. That’s the power of European politicians”, – said the Director of NISS.

But, as noted by the expert, in the conditions of total war, a democratic process, pluralism of ideas and political competition are often given a weakness. It showed the experience of the Second world war. According to Gorbulin, the current aggression from Russia or from Islamic radicals – has adapted well to European liberal environment, it is a parasite on the democratic institutions and shamelessly enjoy freedom of speech. In many cases this is an effective strategy.

“Many in Europe are trying to hide your head in the sand, playing in the “see nothing, hear nothing, say nothing”. The story of the good Putin that will focus on the post-Soviet countries, and Europe will only bring gas and Russian culture, to resist is very difficult. Europe wants to believe in universal values, common security system and a mutually beneficial relationship – we believe Russia. There are other temptations offered by the Kremlin. It is Russian money that flow into the economy of the European countries and in the Russian market, and direct bribery of officials and representatives of the intellectual elite. An example of our country – that’s what awaits Europe if the reality will not be recognized. The aggressor stops only where his opponents are beginning to resist,” – said Horbulin.

However, as the expert noted, on some fronts of Europe will be able not only to defend but also go to the neat offensive. A vivid example – the victory of the Macron in the presidential election in France.

“Recently, our Western partners see Ukraine as a problem for Europe. But the fact is that today Ukraine is rather part of the solution to many problems – including the issue of relations between Russia and Europe. To understand this, Europe needs to experience the same loss we experienced in Ukraine to lose your illusions about Russia,” he concluded.

As the presidential candidates of France funded his campaign?