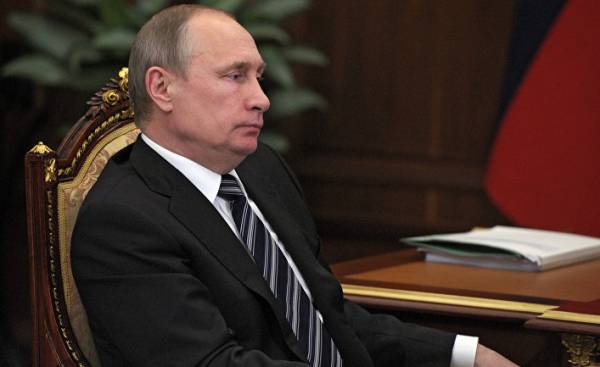 Washington — Over the past two years, the attitude of Americans to the President of Russia Vladimir Putin has improved slightly. 22% of respondents who participated in the survey Institute Gallup responded that they have a positive attitude to Putin, while in 2015, so said only 13% of survey participants. This is the highest since 2003, the percentage of respondents who report positively about the Russian leader. Meanwhile, his negative rating remains unchanged at 72%. The percentage of Americans who are unable to determine its attitude to the Russian President, has slightly decreased.

These were the findings of the survey, which Gallup conducted from 1 to 5 February. In the two years that have passed since the previous survey, designed to assess the degree of popularity of the Russian leader among the Americans, Putin launched a military campaign in support of the Syrian government and, presumably, sanctioned the intervention of Russia in the course of the presidential elections in the United States.

Previous Gallup survey, devoted to Putin and Russia, was held in February of 2015, about a year after the annexation of Crimea by Moscow and the controversy surrounding the Winter Olympics in Sochi.

The main reason for the overall positive growth of Putin’s rating this year was the change of attitude from Republicans: 32% Republicans refer to it positively, compared to 12% in 2015. The reason for this may have been the statements of President Donald trump, who wants to establish relations with Russia after a long-term cooling during the presidency of Barack Obama. The opinion of the independent respondents also changed slightly in a positive direction over the past two years, but to a lesser extent than among Republicans. The opinion of Democrats in General became less positive: today only 10% of Democrats have a positive attitude to Putin.

Americans ‘ opinions of Russia have improved in 2015

American attitudes toward Russia, about the same as their attitude to Putin: 28% of respondents have a positive attitude towards Russia, while 70% — in the negative.

The proportion of Americans with a positive attitude to Russia remains unchanged from last year and amounted to 30%, while in 2015 their share was equal to 24%.

In the past two decades American attitudes toward Russia have varied, depending on that country’s relations with the United States. After the collapse of the Soviet Union in 1991, most Americans had positive attitudes towards Russia, and a positive rating consistently exceeded negative rating by a few points. However, the proportion of Americans with negative attitude to Russia, exceeded the share of Americans who adhered to the positive opinions, in 1999 and 2003, i.e. after the military campaign in Chechnya, Russia and its attempts to prevent US military operations first in Kosovo and then in Iraq.

Along party lines are divided, and the views of Americans on Russia as a whole. 35% of Republicans have a positive attitude to it, while among Democrats the figure is only 16%. The ratio of Democrats to Russia has deteriorated compared to last year, when the proportion of Democrats and Republicans positively related to Russia, was about the same. Perhaps this is due to the fact that Russia is accused of meddling in the presidential election of 2016, including the publication of stolen emails, Hillary Clinton and her supporters.

Perhaps, Putin’s rating has risen in the US, however, 72% of the population still refer to it negatively. Putin was at the center of a series of scandals, including the scandal surrounding the alleged interference in the presidential elections and the resignation of the adviser of national security Michael Flynn (as Michael Flynn), who has worked in this position for only three weeks. In his letter, Flynn acknowledged that he provided to President-elect Trump’s incomplete information about his conversations with Russian officials.

A more friendly approach of US President Donald trump Putin, it seems, contributed to a more positive attitude of supporters of the presidential party to the Russian leader. On the other hand, the attitude of Democrats to the Russian leader, are still at a low level. And this year could be crucial in determining whether the United States to reach agreement with Russia, and whether a small increase in Putin’s rating is a short-term phenomenon or evidence of increasing positive evaluations in the future.