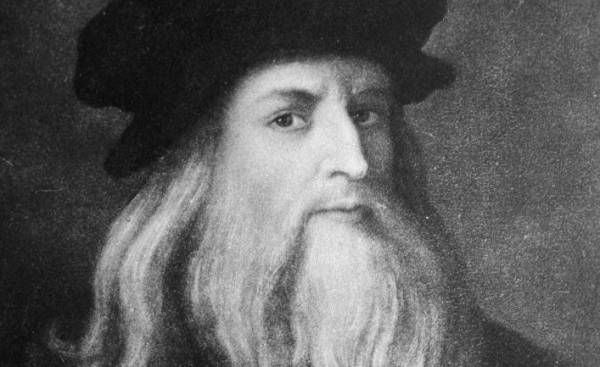 His name means the perfect combination of brilliant art and innovative science. Even his contemporaries Leonardo da Vinci (1452-1519) thought he was a versatile scientist, who at the last supper Christ could portray as perfect, and how to design a Royal Palace or to organize removal of garbage from Milan. But as the Italian intellectual of the Renaissance, Leonardo was able to present their skills, including in the form of active participation in the dark side of that era. Numerous samples of military equipment he brought joy to its customers that beginning of a new era accompanied first and foremost by endless wars. Among his designs, caused a sense of fear, there was even a tank.

The fact that the Creator of the “Mona Lisa” was engaged in the murder weapon may be very surprised his current admirers. At that time it was more evidence of pragmatic intelligence. This was proved by the son of a notary and a servant or slave, which previously developed her talent as an artist in Florence, when he was in 1482, in contrast to many of his friends were not looking for the mercy of a profligate Pope Sixtus IV, and asked to see the Sforza rulers of Milan. They were,on the one hand, connected with the Medici of Florence, on the other hand, they were interested in a military support in the fight against Venice. In his petition for admission Leonardo promised to promote this.

Indeed, numerous design drawings of weapons Leonardo da Vinci belong to the early 1480-ies. However, he proved his genius foresight. Because he turned his attention not on the catapult and armor that prevailed in the middle ages on the battlefields, and modern firearms. It was all the more remarkable as Milan were in the area of military operations the most feared military powers of the time — the Swiss Confederation.

In their wars against the Habsburgs, Burgundy and French troops of the Swiss Confederation perfected the fight lightly armed infantry with knights in medieval armour. Their moving and tightly constructed series not only withstood horrific attacks of the knights, but they are with their long halberds, a mix of spears and axes were also able to go to the counter. Hooks they dumped knights of the seats and literally cut to pieces. At the end of the XV century, the Confederation was considered a military superpower, which was perceived as a wise contemporary of Leonardo Niccolo Machiavelli (Niccolò Machiavelli), might even create an Empire.

Meanwhile, Leonardo recognized the weak point of the Swiss. Because they are your victories are always won with the favorite applications of the infantry, it has strengthened their faith in their own military power and made them blind to the rapid development of military technology. And when the aristocratic cavalry units over and over again was beaten, the big rulers of the countries in Europe began to look for new means and ways to protect and expand their power. They could, unlike the Swiss, in their poor valleys, to rely on the administration, which was able to increase the economic power and tax their territories. New proceeds were invested not only in court luxury, but in military equipment. To do this, Leonardo was the perfect man.

His main focus was on the use of small movable pieces. Even the Hussites in 1420-ies with great success used wagenburg, equipped with light firearms. Leonardo went on. He designed for the transport of guns a special machine, which 500 years later was to make the revolution of war — a tank. 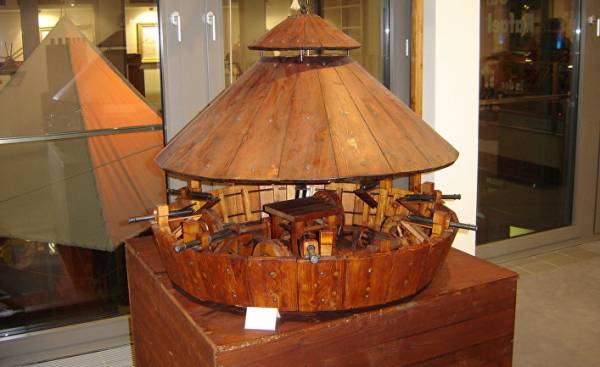 The carriage had 6.5 meters in diameter and was approximately 3.5 feet high. In this circle was located 16 light guns so they could shoot in all directions. Domed hood protected the crew, consisting of eight people. The car was on four wheels. With the help of levers and gears the crew could move your car forward and backwards, not very fast, but it wasn’t necessary because the fire power was to keep the enemy at a distance.

Although the Swiss have proved their superiority over the hordes backed by the artillery troops of Charles the Brave of Burgundy, Leonardo made a bet on the power of guns. So, he designed the “tool body”, which can be considered as the prototype of the machine gun. On the carriage was set three number of small-bore pipes. At the time when he fired a row, it was possible to charge the second, and the third row was cooled.

To increase the accuracy of hitting, the pipes were installed on the stand, which by the rotation of the bolt can be moved in height. The same basic idea was the basis of a single gun, the pipe which can pivot both in height and sideways. While the car on which the weapon was transported, it was not necessary to change. This includes the shield of wood to protect the crew from enemy bullets.

Although the drawings Leonardo was built the cannon on his estate in the Palace of Clos Lucé in the Loire, you can see numerous models, it is considered improbable that his tank or gun-on ever appeared on the battlefield. Perhaps Sforza all the designs seemed too wasteful. Instead, they gave the inventor the orders for the decoration of their palaces and preparation for the holidays.

The basic idea of Leonardo that with the firepower to step on the dense ranks of infantry, was innovative. In 1515, four years before his death, under Marignano (Marignano), near Milan, met the troops of the Swiss Confederation and the French king Francis I. the Soldiers of the Confederacy still believed in their tried tactics, while Francis brought to the battlefield a strong connection to the cavalry, and most importantly 300 guns. Before their positions formed a mountain of bodies of dead Swiss, who lost half of his army, exactly 11 thousand people. The great powers of the Swiss Confederation finally passed, the future was for a modern state.