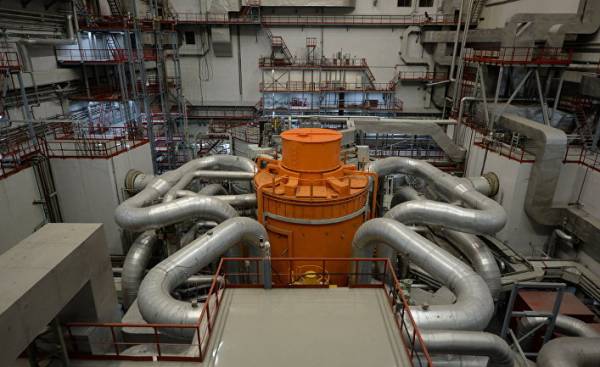 The accompanying journalists the representative of Rosatom repeats the warning: “Inside there should be no electrical appliances. You need to leave them in the bus”. “Can only take hand-Luggage,” he jokes with a hint of espionage. No gadgets on the object, of course, do not miss.

Beloyarsk NPP is one of the jewels of the country, is located 1500 kilometres East of Moscow at the foot of the Ural mountains, near the town of Zarechny. Despite the remote location (an hour away from Yekaterinburg, the capital of this industrial region), a plant well known in the closed world of the nuclear industry. The fact that there are two of the world’s only operating fast breeder reactor, bn-600 and bn-800. This was first developed by the Americans, technology had its hour of glory in France with the reactors Phénix and Superphénix. The fast reactors are often called the Holy Grail of the nuclear industry: they can consume or produce plutonium, the burn spent fuel from other reactors and transuranic waste (remain radioactive for millions of years). As a result of their work, they produce more nuclear material than they consume, thus earning the title of breeder reactors.

On the outskirts of the high fence of the grid represents the boundaries of the object. At the entrance are checking the soldiers of the national guard. Walking along the artificial lake straight road connects two of the experimental reactor, located at a distance more than a kilometer from each other. Traditional concrete pipe classical reactors gave way to a long metal structures. Once the fuel is immersed in a molten metal (sodium) without the use of water may require the air intakes for extra cooling.

“This nuclear technology is reliable and safety. Bn-600 works from the 1980s years without serious problems. His life was extended for ten years till 2020”, — says Director of the plant Ivan Sidorov in a spacious conference room. In front of each chair hangs a screen on which revolves a video about the history of the technology of fast neutrons in the country from 1950 to the start of bn-800 at the end of 2015.

To get closer to the reactor, it is necessary to leave the city clothes and to wear the uniform of thick white cotton with a dosimeter on the chest to monitor the received radiation. Production facility is impressive for its size, and in its center is a large orange cylinder with fuel and three circuits of liquid sodium, which is under great pressure and heated up by nuclear reaction. The first circuit exchanges heat with the second, which has a lower temperature and is not radioactive. That, in turn, evaporates water that turns the turbines. The whole process is automated, and get to the object only during the period of maintenance when the replacement of the nuclear fuel.

In the bn-800 Russia has implemented measures that are considered the French Commissariat for atomic and alternative energies (CEA). “Containment is installed in the receiver of the corium, and the building has a square shape that allows you to install the fasteners on the sides of the reactor,” explains Nicolas Devictor (Nicolas Devictor), the program Manager of the fourth generation of reactors in CEA.

An example for India

Anyway, the main feature (or concern) in terms of the safety of such a reactor is the nature of the fluid that is in the nucleus. The fact that upon contact of liquid sodium with air or water can cause fire and even explosion. To prevent leaks is taking all possible measures. Bn-800 is equipped with system of injection of inert gases, argon and nitrogen. Since the start of the reaction in the-in June 2014, “in the primary circuit there is no leakage. Happened only one in the secondary,” — recognizes the shift supervisor of the reactor Department Andrey Smelov. There were no consequences. At the same time for the first years of the bn-800 were registered more than ten leaks.

The next reactor bn-1200, which hopes to get command of Beloyarsk NPP, designed to be 20 times more reliable. Contours with sodium will have to be inside the shell. The idea is to increase the safety and reduce the cost of electricity production. In addition, to conduct experiments with heavy isotope uranium-238. Anyway, the decision on construction has not yet been made.

The work of Russia in this region has become an example for India. Director Centre for atomic research Dr. Arun Kumar Bhaduri argues that “Russia has always been an important partner of India in the nuclear field. We are two of the world’s only country with an active policy in the field of breeder reactors. Until the end of the year we hope to launch our first fast breeder reactor at Kalpakkam”. In India there is great demand for electricity. Similarly is the case in China, which also took the eye on this technology. Nuclear capacity in the country will reach 59 GW by 2020 and 200 GW ten years later.

Antonio Ferreira: “the world is the four best goalies. They all play in Shakhtar