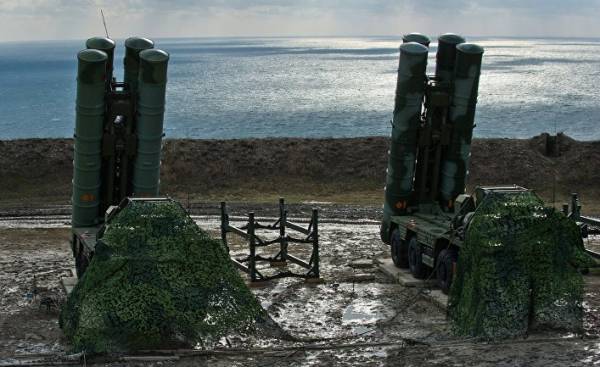 When in recent years felt that the threat in our region turned in the direction of our country, that prompted Ankara to active searches of air defense systems. More than ten years, Turkey is working towards the acquisition of defense systems, conducts negotiations.

The goal is to make Turkey more secure from external threats, to create a defensive shield within its borders. As you know, in our region, turbulent, johnny, Hans, Henry, Richard seek to “reconstruct” the region using terrorists as a weapon. One country is destroyed, create another. In this situation you need to be prepared for any situation and any conditions.

The story associated with the delivery of air defense systems, very long… Briefly summarize the course of events from the beginning.

In the period when the war in Syria has hardened, and the terrorist threat at our borders has reached its climax, we as a result of active pressure on our NATO allies were able to place in Turkey Patriot battery. About two years ago, these batteries are hastily taken away as if to save the good on fire. USA, Germany and the Netherlands one after another brought Patriot missiles from Turkey.

Moreover, our allies have left us when we most needed their help.

This was done deliberately to drive Turkey into a corner and leave it vulnerable, vulnerable to threats. This situation forced Turkey to conduct even more intensive searches.

Turkey, in spite of this diplomatic treachery, at first, opted for systems that could be integrated into the NATO system.

So, Turkey knocked on the door of the United States, which produces missile systems Patriot. USA reluctantly reacted to the sale of these systems in Turkey. In addition, they never agreed on the transfer of technology, which Turkey in the negotiations, called the priority condition.

As a second alternative for air defense systems, medium and long range have been proposed complexes of the SAMP/T, which was produced by the consortium “EuroSam”, supported by the French and Italian governments.

But at whatever door we knock, our Western so-called allies, apparently believing that Turkey has no other choice but to purchase a system that can be integrated into the NATO system, reluctantly came to our proposals. And the transfer of technology they’re not even allowed to talk.

In addition, they were asking. Shirk negotiations. To delay the process. And ultimately appealed delaying tactics.

Leaders in this process were the United States, which not so long ago passed through the Senate our small-scale military supplies, and the Germans who refused to sell us spare parts for Leopard tanks in need of repair after the operation “shield of the Euphrates”.

Their position, they showed what kind of Turkey they want. To Turkey always stood with an outstretched hand to them, depended on their technology, and she never produced.

It is no coincidence that President Recep Tayyip Erdogan says: “Bad neighbors make us rich.”

Thus, recently, Erdogan made a statement about the purchase by Turkey of Russian air defense systems s-400 long-range, and this statement has plunged the West into sadness.
When President Erdogan announced that the necessary steps with Russia made and digital signatures, he said, “God willing, we will see s-400 in our country. We will also work on their joint production,” and made clear that the parties have advanced much further in reaching agreements.

As you can see from these clear expressions, Turkey is very close to buy air defense system s-400 from Russia. The parties reached an agreement in principle and discuss the final details.

When Turkey and Russia came to a final point of conclusion of the agreement on air defense systems, the US and the Western world were alarmed. Anxiety peaked.

They saw the seriousness of the situation. Understand what fish they missed, and now began to pour statements.

They are again trying to pressure Turkey through NATO.

On the one hand, they say: “Turkey is free in terms of their security,” but on the other hand, they are pushing, which is essentially sticking your nose in our internal Affairs.

First, the head of chiefs of staff of the United States Joseph Dunford (Joseph Dunford) at the end of the week said: “If Turkey will sign an agreement with Russia for s-400, it will cause concern.”

Then followed a warning by the official representative of the Pentagon.

Now the mouth of the experts, who at the slightest crisis out of sight, they began to say: “Erdogan pours oil on the fire.”

They warn that the purchase of s-400 will deepen the conflicts of Turkey with the United States and other NATO allies.
They want Turkey took another step back. Disregarded the good relations that it develops with Russia based on mutual trust. And that Russia has included Turkey in the category of “countries that cannot be trusted.”

To Turkey, which they formerly used to use as a delivery boy again stood before them on his knees and held out his hand.

One shot — a flock of birds…

Those who are trying to force Turkey to abandon this decision, I must first ask the following: who forced Turkey to seek alternatives outside NATO?

They know perfectly well that the point to which we come today is the result of the problem of trust in relations with the West, which every day becomes more acute.

Let’s continue to remember how Turkey was put in a position where she was forced to go his own way.

The tender for the purchase of air defense systems took first place in the Chinese company “CPMIEC”, the second “Raytheon” from the United States, the third European consortium “EUROSAM-T”, and the last place is the Rosoboronexport from Russia.

We claimed the FD-2000, missile systems, long-range air defense from China who has accepted conditions of Turkey and submitted the best bid. In the approach to 2013, it became clear that negotiations with China had reached the final stage.

Then active opposition to the United States and the events that followed one after the other, put the agreement in a drawer.

Turkey has refused from the Chinese alternative. Again started negotiations with the consortium, which includes companies from the US and the EU.

But it didn’t work. Their position was no different from the initially conducted negotiations. Turkey was forced to push to the East.

After a big crisis, which caused a confrontation between Russia and Turkey, today we with Russia have reached the final stage of negotiations for the s-400 as noted, the most efficient and advanced systems in the world.

It is reported that the delivery of the first two s-400 Russia will be able to be implemented in 2018. Complexes, which will come to Turkey in the first phase, will provide her urgent needs. Even a single country except China, Russia has not transferred the technology of s-400, despite the fact that many States would like to purchase these systems. In addition, Turkey even Russia have reached agreement on joint production. This is an important plus.

Moreover, the s-400 is a system which largely will be able to provide the needs of Turkey.

Some of the best in the world…

As is clear in the rising noise, they have a very high potential for deterrence.

When the first batch of s-400 will fall into our hands, we will have an air defense system, long-range and height steps.

But the main goal is to create a national air defense system.

In recent years Turkey has made great strides in the field of defense industry.

Works associated with the development of missiles Bora large range of a class “earth — earth” continues in full swing.

Project systems, their qualification, the creation of the required infrastructure was planned in phases.

Roketsan, Aselsan, and MKEK are working at full capacity.

A country with a strong army, Turkey will have one of the most advanced air defense systems in the world. Moreover, you will be able to produce them. How can they not worry?

And when the potential of s-400 added to the fact that we are constantly developing the infrastructure of the domestic missile Hisar and Bora, their fears are even greater.

Let’s not forget that the real enemies of Turkey frightens the role on her shoulders laid story.

As the saying goes, the enemy to instill fear, friend, is trust!