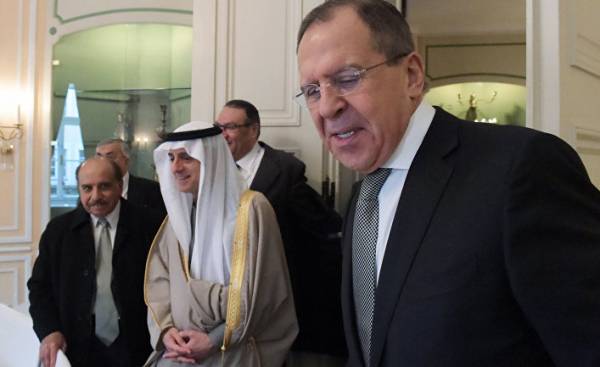 SZ: Mr. Secretary, a year ago about Syria, You said that President Bashar al-Assad must go. Or peace through resignation, or by the use of force. Both seems incredible since then, the regime retook Aleppo. Would You and today your saying?

Adel al-Jubeir: He still has to go. Assad, after all the crimes committed in Syria, no future. He is responsible for 600 thousand dead, two million refugees and the destruction of their country. We are working on a political process that is based on statements of the Geneva peace conference and the UN Resolution 2254, which provide for a political transition to a new Syria without Bashar al-Assad. If this transition is not, then I can’t imagine how to end this war.

The international community is unanimous in its attitude towards Astana: technical technical talks on ceasefire and access for humanitarian aid. Political negotiations will continue this week in Geneva under the leadership of the United Nations on the basis of the Geneva statements and UN resolutions.

— You say Assad must go: at the beginning of the transition process? Or at its end, with a long, possibly drawn out for years transitional period?

— The Syrian opposition believes that it needs to go in the beginning of the process. The Russian point of view is that he should leave at the end of the process, in that case, if he is elected or not he will run. I believe that the Syrians should come to a consensus about how the schedule would look like for the transition — no one else can make that decision.

— In Syria there are more than a thousand armed groups, I’m sure. some of them dissatisfied. But we do not supply the Syrian opposition the weapons directly. All they get, they receive through the joint operations center of the like-minded States, including the United States. This mechanism, we established several years ago with our partners and allies and collectively decide which groups and what weapons you get, and how it will be distributed.

— About the battle for Aleppo and continuing air raids on Idlib and the areas the rebels around Aleppo and Damascus: How You consider, whether those countries make them?

But You will not be at your sole risk and fear to supply weapons?

We can’t do that. We — all the countries who supported the opposition, a few years ago decided that we will do everything together and with the greatest transparency. And we adhere to this.

We don’t know yet how it will look policy on Syria, the US with Donald trump. But trump said it will stop supporting the Syrian opposition. What this means for Your country?

— The U.S. position is to destroy the terrorist group “Islamic state” (organization banned in Russia — approx. transl.). The army is running for President plans to achieve this goal. I think that these plans will be ready soon. The Kingdom and other Gulf States indicated their willingness to participate on the US side with the special forces. Also some countries from the Islamic coalition against terrorism and extremism are ready to supply troops. We will hold talks with the US to see what is the plan and what is necessary for its implementation. The basic idea is to liberate territory from ISIS, but also to ensure that they do not fall into the hands of Hezbollah, Iran or the regime.

— You talk about the areas that ISIS controls. But the regime is trying to use Iran to capture region held by the rebels.

— We will have to think about what kind of support can we provide to the opposition. But the key in increasing pressure on the regime, so he went to the political process because it is the only solution. Otherwise, we will be in Syria for many, many years of guerrilla war.

Stay on the US government: President trump has departed from the solution with the two States in the conflict between Palestinians and Israel but wants moderate Arab States assisted in the new peace negotiations. You can participate? Because of the statements trump contradict the Arab peace initiative, which came from Your country, and provides a solution with two States.

I would not interpret the U.S. position. I believe that position still is to resolve the conflict with two States, because the decision of one government will not function. We think that the involvement of the international community in the region we can come to a resolution that will satisfy both sides. This decision has repeatedly been achieved. The party came very close to the line but didn’t cross it. We negotiated with the government of Donald trump that, in our opinion, would be the best way to achieve peace between Palestinians and Israelis.

— What, in Your opinion, would be the minimum requirements for a peace Treaty?

— The return of the occupied 1967 territories, as recognized by both parties the exchange of territories on a small scale, so that the majority of immigrants remained in Israeli territory, and the Palestinians would receive compensation in the form of land of the same size and the same values. East Jerusalem as the Palestinian capital, West Jerusalem as the Israeli capital, the agreement on the refugees.

The new US government has said that it wants more tough to deal with Iran, You are definitely good to hear. President Hassan Rouhani (Hassan Rohani) visited Kuwait and Oman, before the Minister of foreign Affairs of Kuwait on behalf of the Council for cooperation of the Gulf States went to Tehran. In some places this is considered the beginning of the convergence. Do You see this opportunity?

It depends on the Iranians. They attack embassies and kill diplomats. That they organize a terrorist cell that smuggled bring explosives and weapons into Bahrain and Yemen. It is their revolutionary guard operating in Iraq, Syria and Yemen, they are heated confessionalism in the region. We hope that Iran will change its aggressive policy, will behave like a national state, not as a revolutionary mode. Convergence involves changing behaviour, not rhetoric. And we, unfortunately, have not seen.

— Your biggest conflict with Iran is Yemen. Supported by Saudi Arabia, the government retook the town of Mocha from the Houthi rebels, the military coalition, which is headed by Your country, announced the Hodeidah military zone. You are completely counting on the military option, because You need a political solution seems impossible?

— Hodeidah was declared a military zone, because the Houthis used the Hodeidah to smuggling to supply arms. They demand a ransom for the ships that want to dock at al Hudaydah, and after the ships are unloaded, they have stolen humanitarian help to sell it further. Military pressure on the Houthis and former President Ali Abdullah Saleh (Ali Abdullah Saleh) is increasing. Economic pressure is also growing, because they looted the Central Bank — two billion dollars and the pension Fund. Now there is no more money they could steal. We hope that the Houthis in connection with the military and economic pressure will understand that their intention to occupy Yemen is doomed to failure. And that they finally will decide on a political path.