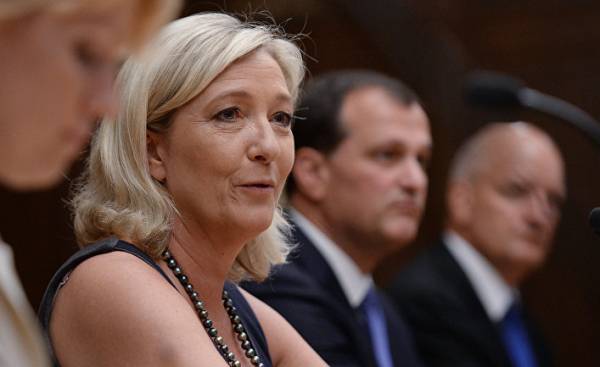 FIGAROVOX: last week, Marianne released an article with the headline “Why they can lead it to victory” with a photo of marine Le Pen and the hint of trouble the other candidates. Edition correctly assessed the political situation in the country in a matter of weeks before the first round of the presidential election?

Guillaume Bernard: At the moment, marine Le Pen promise to lose in the second round with any opponent, with the exception that the candidate of pronounced ultra-left views. This, incidentally, confirms that the fluidity of the electorate to the right more than the left.

Anyway, I would not say that the candidate from natsfronta no chance in the confrontation with Emmanuel Macron (Emmanuel Macron) as they represent the complete opposite of each other. In some ways it resembles the fight of trump and Clinton. The right-wing electorate, which stands for sovereignty and against multiculturalism, can support marine Le Pen. As for left-wing voters, they may not come to mind liberalism of Emmanuel Macron, but are still unlikely to support Le Pen and, rather, prefer to abstain.

Besides, there is no guarantee that the Makron to the second round. Although his rating is about the same level as in françois Fillon (François Fillon), confidence that all potential voters actually support it, much less than in the case of the candidate from “Republican”. I mean, he looks an excellent candidate in the second round, but his results in the first doubt.

In all the polls, marine Le Pen is unconditionally wins the first round with a score of 25% to 27%, but then rests as if in the ceiling, which gives her to win more than 40% in the second. What is the reason?

The “Republican front” is on its last legs, but NF is still unable (and probably even unwilling) to seek allies to improve their results in the first round and winning the second. This is partly explained by the strategy of marine Le Pen “neither right nor left”: she tries to attract different angry voices, which manifested itself in the 2005 referendum on the European Constitution. This is quite a risky move, because to say “no” was motivated by different motives, which do not serve as an endorsement of any person or party.

Note also the change in the position of the NF over the past 15 years. During the campaign before the second round in 2002 Jean-Marie Le Pen (Jean Marie Le Pen) stated that it is “the right and left”: the right to economic and plan and the left social. Anyway, recently, marine Le Pen tried to slide to the right tone of their rhetoric. So, live France 2, she called for the freedom of schools without contracts.

In addition, there is a more profound moment than the questions of electoral strategy. A number of proposals NF (the authority of the state, the restriction of immigration, rigid security policies) supported by the majority in public opinion, if mentioned blindly, i.e. without indication of party affiliation. At the same time they cause the rejection, if it is the label of the party. Apparently, the French want the implementation of the NF, but not his coming to power.

— Marine Le Pen advocates a new structure of political life, where one side are patriots, and on the other the globalists. More than half of the unemployed and the workers can vote for the NF in the second round. Not confirm whether a loyalty strategy marine Le Pen to move away from confrontation between right and left?

— The current leadership of the NF argues that the differences between right and left is left only on economic issues, and that even there they are almost obliterated because the majority of the left has moved away from collectivism and somehow supported liberalism.

In fact, any political spectrum can be described and analyzed on the basis of the split between right and left. The fact that his criteria has changed over the years, does not allow to draw a conclusion about his disappearance. In the nineteenth disagreement rested on the question of political system, (monarchists against the Republicans), and in the twentieth century — on the limits of the powers of the state. Since the dividing line has moved further and now is considered right through the camp: at the moment we are talking about the classics and the modernists.

Classical philosophy in favour of natural sociality (the social system is governed by the principles of cosmological order of things), whereas modern ideology becomes an apologist artificial sociality (social rules of the system are the result of the interaction of desires). A fault line in the foundations of the doctrine runs through the camp, which in electoral terms is called the right: there are ontological right (the classics) and case law (modernists) who have left only very minor differences.

This line remains unchanged for all the questions, whether the nation (national identity versus multiculturalism), Europe (sovereignty versus federalism), morals and bioethics (conservatism vs. progressivism) or international relations (realism vs idealism). These thematic differences are superimposed on each other, and consideration of only one of them distorts reality and leads to inconsistencies in the doctrine.

From this angle the “Republicans” are as inconsistent as the national front. First the party stands for economic freedom for the dynamics of society, but puts aside the immigration issue that breaks the whole logical sequence. The second everything is exactly the opposite. On matters of morals both are liberal positions, albeit with some admixture of conservatism: the abolition of the law Taubira of NetFront and school uniform from “Republicans”.

— In your latest work you are describing the phenomenon of displacement of French society to the right. How would you define in this process, the themes of sovereignty and national identity, which are of great importance as for “Republicans” and the National front?

After the French revolution, the national movement policy was directed to the left as new ideas were born on the left flank and pushed back to the right those that were formed earlier. That is, most of today’s right-wing political organizations are guided by the ideas of the left of the origin. Only after the fall of the Berlin wall and the collapse of the USSR the spread of leftist ideas came to an abrupt halt.

After the change of the situation (the transition from the confrontation of East and West to an uncontrolled financial and cultural globalization) electoral progress and emergence of ideas has shifted to the right. Classic right-wing had long been embarrassed, but now occupy positions. This is the movement to the right. The left was exhausted intellectually and occupy defensive positions in the political.

Since 1990-ies the movement of ideas and organizations is carried out from right to left. In particular this applies to liberalism, which is regaining its intellectual unity: economic liberalism, which was shifted to the right in politics, the emergence of such geopolitical powers as the Soviet Union, is reunited with the still left social liberalism. Today this is reflected in the positions of the Macron. That is, the already-mentioned motion implies the strengthening of right-wing movements in the electorate and the revival of the initially right-wing political ideas that for decades lay under a bushel. Therefore, the future of the right that agree with the left (“a broad coalition”) and in perspective (again) to become the left, taking advantage of the disqualification of socialism.

Once the direction of the struggle of ideas has changed dramatically, in the past opposed each other’s ideological positions can now collaborate and even support each other. Thus, the protection of sovereignty becomes a legal backup of preserving cultural identity. Conservatism served mainly to preserve the heritage of the revolution (i.e. modernism) and containment of the reaction: that is, he was to protect the established order and bourgeois social order consisting of social understandings and material interests. Under the new right movement conservatism gets a shade of reactions: it borders with the requirement to restore the natural order of things.

— In response to the scandal surrounding the Fillon Marion Marechal Le Pen (Marion Maréchal Le Pen) is called right electorate to support the candidacy aunt. Among the right has the war started?

Emmanuel macron are literally ruining the Socialist party. Blow to Francois Fillon, and its possible (although this is not certain) absence in the second round of the presidential elections can do the same with “Republicans”. The defeat could exacerbate internal contradictions (and they are in the party already and so many, especially on the issue of candidates for the upcoming parliamentary elections) and thus lead to changes on the right flank of the political spectrum. Part of the right-wing would support a liberal coalition of Macron, whereas others probably would have tried to come to terms with NetFront.

NetFront also launched today as an active rhetoric, because although the second round he is, seems to be secured, he also could face an internal crisis when not enough high results in the presidential and parliamentary elections. The rebuild on the right flank will be a result of one or other crisis, or combinations thereof. Tied to the current party structures politicians will struggle to resist the desire of right-wing voters to the reorganisation of the political spectrum on the basis of clear differences in doctrine.