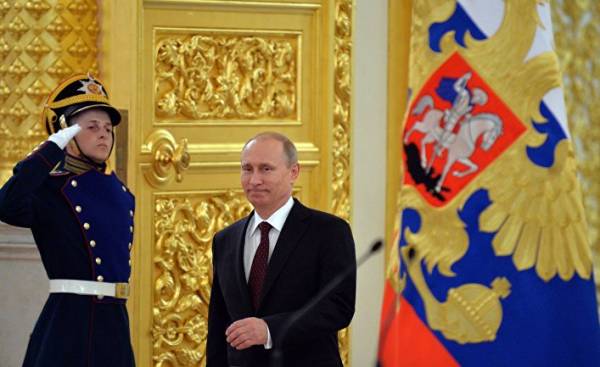 Moscow — Russian President Vladimir Putin on Sunday said that American diplomatic missions in Moscow and other places will have to reduce the number of its employees for 755 persons, which signals a significant escalation in the Russian response to us sanctions imposed over the Kremlin’s interference in the presidential elections of 2016.

The United States and Russia has expelled dozens of diplomats to each other — but Sunday’s statement Putin made in an interview with TV channel “Russia 1” will be the basis for the largest reductions in diplomatic staff, comparable only with the end of the American diplomatic presence in a few months after the Communist revolution in 1917.

In an interview, Putin said that the number of American diplomatic and technical staff will be limited 455, and will correspond to the number of Russian employees working in the United States. Currently, according to the American and Russian sides, about 1,200 people work at the Embassy and consulates of the United States in Russia.

“Because more than a thousand employees and diplomats, and technicians — worked, are still working in Russia, 755 will have to stop their activities in Russian Federation”, — Putin said in an interview with journalist Vladimir Solovyov, which was shown on the evening news of the national TV channel.

Putin’s statement was made during a visit of Vice President Pence to Eastern Europe for a period of three and a half days to demonstrate support for countries concerned about possible interference from Moscow. We are talking about Estonia, Georgia and Montenegro.

“We have already clearly stated their intentions and expect that Russia will change its behavior,” he added.

On Sunday evening a senior state Department official, who asked not to be named, said: “the Russian government demanded that the total number of employees of the American mission in Russia for September 1 has been reduced to 455. This is an unfortunate and inappropriate step. We study the impact of such restrictions, as well as our response to the Russian actions”.

On Friday, when the Senate voted for tougher sanctions against Russia, the Kremlin reported that some American diplomats will be expelled, but the size of this reduction was very significant. They affected the Embassy in Moscow and missions in St. Petersburg, Yekaterinburg and Vladivostok.

The U.S. Embassy in Moscow was not able to provide data on the exact number of its employees in Russia. However, according to the report prepared in 2013 by the state Department of 1200 employees of the American mission in Moscow, 333 people were citizens of the United States, and 867 — foreigners, many of whom, apparently, were the Russians — technical staff, including drivers, electricians, accountants and security guards. This suggests that most of these 755 persons will not be expelled from the country.

“This is a landmark moment, said in an interview with the Washington Post Andrei Kolesnikov, an employee of the magazine “Kommersant” that in the past 17 years, regularly accompanies Putin on his visits. Patience, indeed, is gone, and everything that he set aside in this conflict, now they will be done.”

The Russian government, moreover, seized the two objects which is diplomatic property, — to the cottage in a green area of Moscow, and also in the warehouse. This was done in response to the decision of the Obama administration in December last year about the arrest of two Russian houses in the United States.

These steps were taken in the moment when Russia lost the hope to improve relations with the United States during the administration of trump.

“We have a very large collection of tools, Ryabkov said. — When the Senate unanimously supported this strange and unacceptable bill, it was the last straw.” A few hours Putin during his formal interview, he said that he expected the deterioration of relations between the United States and Russia and that Russia may take additional measures to counter U.S. financial sanctions that have been approved by the house of representatives and the Senate and that President trump promised to sign it.

The reduction of the U.S. diplomatic and technical staff is a response to the expulsion of President Obama’s 35 Russian diplomats in December last year in response to alleged Russian hackers hacking servers of the National Committee of the Democratic party. In addition, the United States shut down access to two diplomatic area on the Eastern shore of Maryland and on long island. American officials claim that they were used for intelligence gathering.

It is not clear how the Department will reduce their workforce in Russia. Some local residents were hired to assist in the process of significant expansion of the American Embassy in Moscow. If we talk about the quantitative representation in Moscow of the various ministries, according to the report for 2013, followed by the Department of state is the Department of defense — 26 were from the Intelligence Department of the Ministry of defense (20 of them were American citizens), and 10 others — Agency threat reduction (nine of whom were United States citizens).

At the Library of Congress had two members from among the Americans and two foreigners, NASA — eight Americans and four foreigners. This should add another 24 Marines who guard the Embassy.

Russia announced steps to increase likelihood of adoption in the next few days new, possibly asymmetric responses on the part of the United States. Michael McFaul, former U.S. Ambassador to Russia, has posted this message on his Twitter page: “If these cuts are real, then the Russians will be forced to wait for a visa to enter the United States for several weeks if not several months.”

In the preparation of this article took part Ashley Parker (Ashley Parker) in Tallinn and Madhumita Murgia (Murgia Madhumita) in Washington.