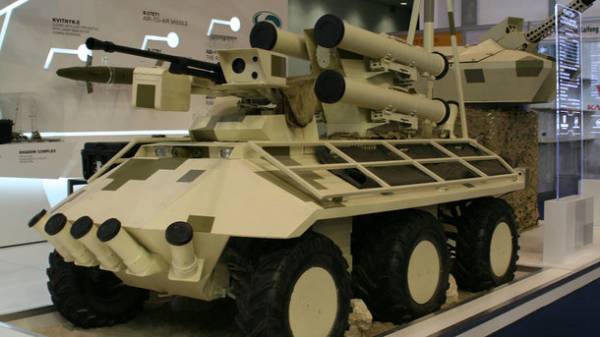 Immediately after the official opening of the largest military show in the world “IDEX-2017”, the Prime Minister and Vice President of the United Arab Emirates Mohammed bin Rashid al Maktoum visited the stand of the State concern “Ukroboronprom” – the greatest attention was paid to Sheikh latest Ukrainian drone Phantom and expressed their interest in the product. About it reports a press-service of “Ukroboronprom”.

Reportedly, the General Director of “Ukroboronprom” presented to the Prime Minister of the UAE with the exposition of the state Concern and discussed with him military-technical cooperation between Ukraine and the United Arab Emirates, noting the revival of such cooperation in recent years.

“With such weapons is discreet and mobile “Phantom” capable of striking heavily and lightly armored targets at a distance of from 100 to 5000 meters”, – noted in “Ukroboronprom”.

Besides, “Phantom” is equipped with a stable turning platform for different weapons. Test firing of the Phantom, which was carried out with an installed machine gun caliber 12.7 mm, confirmed the high efficiency of the new development.

Hybrid engine, all-wheel drive and independent suspension wheelbase 6×6 and hydraulic brake system ensure the “Phantom” high performance, including on the sand. Communication between the control center and “Phantom” are provided by means of protected channels range of up to 10km or fibre-optic cable length up to 5 km.

According to the Director “Spetstechnoexport” Paul Barbula, an updated version of the ground drone is a demonstration of just one of the many variations of the configuration, “Phantom”.

“The goal of this project is to create technology that can efficiently perform various combat missions while minimizing risks to the life of the military,” – said Barbul.

As you know, the first modification of the Phantom was presented during the exhibition “Arms and security 2016” in Kiev.

Depending on the configuration, “Phantom” can perform a variety of tasks:

In addition, the complex use of “Phantom” in the integration of unmanned aerial vehicles, which will also be presented “Spetstechnoexport” at IDEX-2017.

This year “Ukroboronprom” IDEX is the advanced development of the Ukrainian defense-industrial complex, focusing on modern unmanned technology and advanced armored vehicles. This exhibition was held the international premiere of an unmanned “Phantom”, and was also demonstrated drones Anser and Patriot R2.

In addition, at the stand of “Ukroboronprom” presented a combat vehicle BTR-4 and “Dozor-B” combat modules “Taipan” and BPU 12,7, guided missile and artillery weapons, and other advanced development of the companies-participants of the state Concern.

International exhibition of arms and military equipment IDEX-2017 which takes place in Abu Dhabi (UAE) from 19 to 23 February, is one of the world’s leading exhibitions and conferences. The exhibition brings together manufacturers and suppliers of defence products from 50 countries. This year all the exhibits are located on 133 thousand square meters of exhibition space.