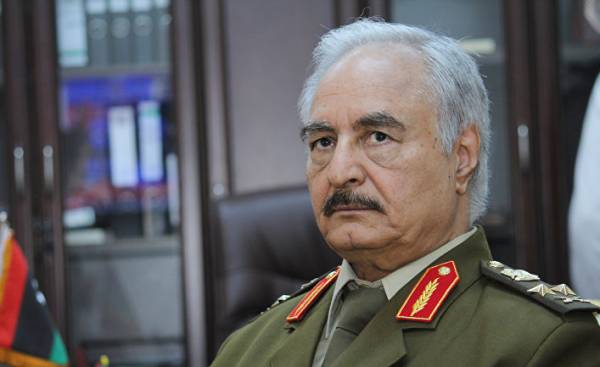 EU tells Russia to rein in the General Caliph Haftarot (Khalifa Haftar), which controls much of Libya. For the EU it’s important: the growth in the number of refugees, the risk of terrorism and the probability of a new Russian triumph.

Russia and President Vladimir Putin after six years of chaos since the fall of the regime of dictator Muammar Gaddafi close to win in Libya’s new foreign policy victory over the West.

Russia has stepped up cooperation with field Marshal Khalifa the Haftarot, which now controls not only the Eastern part of Libya, but the majority of the huge oil fields in the country.

In the worst case, the crisis-ridden EU can hope that with the help of the Haftarot will receive a decisive influence on the flow of refugees and migrants from Africa, from Libya crossing the Mediterranean sea to Europe. However, Russia may create a foothold for its military presence in the Mediterranean. In the best case, Russia could help to make so that feldmarshal became part of an acceptable political solution in Libya.

Against this background, is a frenetic diplomatic battle over the popular 73-year-old North African field Marshal. The fight over the location of the Haftarot played out a few weeks after the participants of the informal summit the EU has focused on the need to stop the growing flow of people arriving across the Mediterranean: we must put an end to this flight, which last year alone cost the lives of 4,000 people drowned in the Mediterranean sea, and which is becoming an increasingly important part of the game logic and in the EU and in some member countries.

The examination of Russia’s role in Libya and the future role of field Marshal has been the topic of many meetings on the governmental level between Russia and Italy leading the negotiations on behalf of the EU. Today the Haftarah is becoming the subject of informal meetings between senior officials of the EU and Russian participants in the Conference on security in Munich, and on Monday the Italian and British Prime Ministers will meet in London, and the situation in Libya will be one of the agenda items.

The question is whether the EU — perhaps with the help of Moscow and in appropriate responses and services to make the Haftarot to accept the role of the military leader of Libya, reporting to a weak interim government in Tripoli (GNA), supported by the United Nations, which now controls a smaller part of the country. GNA completely depends on the support of an extensive network of militias in Western Libya.

Field Marshal is the Central figure

The precariousness of the situation in which a provisional government was again evident yesterday, when it asked for NATO assistance in establishing security and a functioning government. NATO has unsuccessfully tried to do this several times, because in practice it is very difficult to know who actually necessary to maintain the struggle for power in Libya.

“All concerned recognized that the Haftarot need to integrate into power in Libya. But at the moment the Haftarot believes that the wind blowing in its sails, and its position is so strong that it is not necessary to conclude contracts on power-sharing”, explains Libya expert with experience Toaldo Mattia (Mattia Toaldo) of European Council on international Affairs (European Council on Foreign Affairs).

“The fear that he will become a new strong leader, is primarily due to the fact that he has repeatedly said that the armed forces of Libya should become independent from the political leadership and civil structures. Therefore, there is concern that it may become uncontrollable power factor which will get the country a dominant position. But aside from this he is also just popular among many Libyans who hope that his army would be able to put in place the militias fighting among themselves and stop their chaos.”

Last fall, the Haftarot has twice visited Moscow, where, in particular, met with foreign Minister Lavrov. Russia, as a member of the UN Security Council, supports the government in Tripoli, but when the Russian aircraft carrier “Admiral Kuznetsov” 11 Jan dropped anchor near Benghazi on the way home from Syria, where he took part in the war, Moscow gave a clear signal of the EU.

Subject to all rules of military Protocol Haftar visited the aircraft carrier and held a videoconference with Russian defense Minister Sergei Shoigu. There is nothing that would indicate that Russia is violating the UN embargo on arms supplies and sells weapons to the Haftarot, but after visiting the “Admiral Kuznetsov” many wounded soldiers of the Haftarot, was sent to the aircraft for treatment in Russia.

Part of a larger Russian strategy

According to Mattia, Toaldo, Russia holds quite a deliberate geopolitical strategy. “Russia wants to secure influence in the middle East and North Africa and outside of Syria. This is part of a larger Russian strategy when the Russians have also strengthened ties with Al-Sisi in Egypt and Palestine. Russia takes the position of mediator in Libya and shows that she can do what has failed the West after the fall of the Gaddafi regime, paving the Haftarot the road to power”.

Peter Seeberg (Peter Seeberg) from South Danish University indicates that the strength of the Haftarot has now won control over most of Libya’s oil and gas fields, especially on the ports. “Russia is primarily interested in how to gain control in the region not only Syria. But the Russians also want to get something from the Haftorah, because the control over the oil belongs to him, and he may pave the way for the resumption of the arms trade, existed in Russia with Gaddafi,” says Peter Seeberg.

He felt that it was too early to talk about whether the EU is to attract the Haftarot to the leadership of a more stable Libya. “The question is, will he be part of a political decision or he aims to become the sole leader — in a bad way like Gaddafi”.

The U.S. role in Libya remains unclear after came to power, President trump. People trump spoke with the Haftarot, which are more understanding not only in Moscow but also in Washington — because of his ability to fight to resist the attempts of ISIS and al-Qaeda (a terrorist organization banned in Russia — approx. ed.) to gain a foothold in Libya. However, Mattia, Toaldo doubt whether trump and Putin agree on the Haftarot.

“You have to remember that the American military establishment several times actively intervene in what is happening in Libya, and the military is not happy with the fact that Russia, after all their efforts is the direction of Libya. Both Russia and USA are interested in the Haftarah, but now this interest is not necessary to exaggerate”.