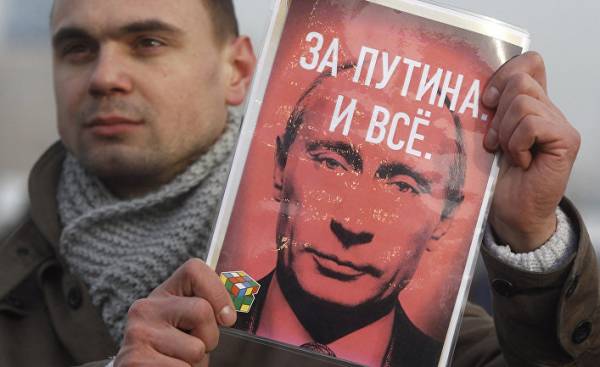 One evening in October 2015 I’m with my Russian friend Valery went to the movies in the Siberian city of Novosibirsk. Near his apartment was a movie theater “Multiplex” with a rich choice of a dozen movies. We decided to watch “the Martian”.

After the movie I asked my friend what he thought of the film. To my surprise, he began to resent one scene that I did not attach any importance. We are talking about the episode when the Americans asked China, not Russia, to provide them with a powerful rocket to return to Mars.

“Why do Americans ask the Chinese?” He literally spat the words. “Because everyone knows that the Russians have the best missiles in the world. We were pioneers in space!”

I said I do not think it is a slap to Russia, and that as far as I know, the Chinese have also a very respectable space program. But Valera, who, by the way, totally apolitical, he was sure that the producers, certainly at the behest of the us government, chose China specifically to humiliate Russia. It was a pretty delusional statement, but it is a sign of the times in Putin’s Russia.

In recent weeks, the President trump unnerving foreign leaders around the world, not to mention the American Democrats and the Republicans, with their relentless praise for Putin. He regularly calls the Russian President a smart, strong and popular. And I can personally attest that in the latter respect he is absolutely right.

I have personally seen how much people’s support for Putin, when in 2015, spent three months in Russia. My conclusion is that many ordinary Russians believe he is, in the words of trunovskogo lexicon, again made Russia great. Although Western observers have criticized Putin for the ongoing human rights violations, brutal suppression of dissent, for the annexation of Crimea and his apparent desire to upend the geopolitical order upside down, all this criticism did not weaken popular support for Putin in Russia.

This is the story of how Vladimir Putin has turned from a little-known adviser to the mayor in the most popular and influential leader in modern Russian history.

The legacy Putin has got broken and demoralised country. Russian believe that he fixed it.

In 1995, 2005 and 2015 I made three exactly the same trip to Russia. Every time I started the journey in Vladivostok, and finished it after eight thousand kilometers in Saint-Petersburg. I have stayed at 11 of the same cities and interviewed the same people. As in the British documentary series “7-Up”, but with the Russians.

In 1995, the country was in a state of devastation. It’s only been four years since the sunset of the Soviet era, the Russian economy is tanking, the ruble dropped sharply, wiping out the savings of people. On top of the economic ladder is nestled a small group of incredibly wealthy people and the rest are mostly barely making ends meet. In Russia surged Western goods, but most they were not affordable. And the one who wanted to start their own business, had to reckon with the ubiquitous Russian mob, who extorted huge amounts of money for “roof”.

The President at the time was Boris Yeltsin, and in fairness I must say that he was not the model of perfection and stability. During his presidency he turned out boldly climbed on a tank the heroic fighter against the putsch in the fat, unpredictable drunkard and a disgrace to the whole country. Time magazine noted: “In the United States, Boris Yeltsin will be fondly remembered as a man who turned the terrible Russian bear during the cold war in a cute and cuddly creature, have no resistance, causing pity and ready to dance for scraps”.

For a country that for decades was the world superpower (one of two), it was humiliating fall and a powerful blow to the ego. When I in 1995, asked Russians to answer questions about America, they often spoke of her with admiration and even envy. One 18-year-old employee of the Moscow McDonald’s named Yuri told me that “to criticize the invasion of American culture in Russia can only nationalists or lunatics”. A 14-year-old Denis, dimisi during our conversation, a cigarette, said to me: “I would just go to live in America. Right now. No questions asked.”

The majority of Russians with whom I spoke, belonged to the United States is quite friendly, with mild envy. Vladimir Putin at that time nobody knew, since he worked in St. Petersburg under mayor Anatoly Sobchak.

By the time my second one held in 2005, the situation has changed. By the time Putin for five years in the office of the President, and I saw a noticeable difference for the better in the welfare of Russians who have been interviewed 10 years earlier. Improvements were also apparent in their cities and towns.

Almost all of the people with whom I spoke — and it was the residents of Chita, Chelyabinsk, Novosibirsk, Irkutsk and Kazan — in the financial plan fared better than in 1995. Many have a credit card on vacation, they went to Turkey and Thailand, and imported clothing and food has become quite expensive. In cities filled ruts and holes on the roads, built the bridges. It was noticeable, as the building of new houses. In the period from 1995 to 2005, oil prices increased almost three times, and with them the well-being of Russians. According to many, these improvements were a direct result of Putin’s leadership.

Putin’s appeal was due to the fact that he, unlike Yeltsin, gave the impression of a disciplined person. He never drank, smoked; he had a black belt in karate. His actions, words, manner of keeping himself gave the signal about the strength and power of Russia, and pride of the Russians was literally tangible. It reminded me of what Ronald Reagan in the early 1980s, has made conservative Americans, when General dissatisfaction with Carter era came to a firm conviction that America can be great again.

That’s why the Russians are buying the fridge magnets with a picture of Putin t-shirts and calendars with his photos.

During the third trip in 2015, I have noticed recurring things: (1) people (like my friend Valerie) felt that the United States with a lack of respect for Russia; (2) they loved Putin and admired him; (3) they were confident that Putin will restore Russia’s position on the world stage, regardless of what it will require to elevate Russia, to belittle US, or to do both.

I was wondering whether Putin is so popular, as shown by media reports and opinion polls. For example, a survey carried out in July 2016, a Moscow nonprofit organization, indicated that Putin’s popularity rating reached an astounding figure of 82%. I quickly realized that the way it is. Wherever I went, Putin looked at me from everywhere: from magnets hanging on the refrigerator, with t-shirts, wall calendars. In the homes of the people I saw it in the photos lovingly displayed alongside family photos on the shelves and in the cabinets of the living room. One woman in Vladivostok, in response to my question about how it relates to Putin, took his picture in the frame and gently kissed her.

He was fabulously popular, though in the Russian economy again began to decline. From January 2014 to September 2015, when I arrived in Vladivostok, the ruble fell by half, destroying the purchasing power of Russians. But almost none of my interlocutors in Russia is not blamed Putin. Instead, they blamed the Americans (and the West in General), doing it for two reasons. First, because of the sanctions that we imposed against Russia after the annexation of Crimea. Second, they were convinced that we artificially lowered oil prices in order to harm the Russian economy, which largely depends on profits of exports.

This more than anything else convinced me that Putin’s power in Russia is vast and has deep roots. The head can easily enlist the support of the population when the economy is strong. But when the situation begins to deteriorate, to preserve popular support becomes more difficult. And Putin is possible.

Of course, there is another, uglier reason why he has sky-high popularity ratings. While in power, Putin systematically uprooting political dissent, and dilutes rather free last press. In 2015 in the vicinity of the Kremlin, was murdered opposition leader Boris Nemtsov. In London with polonium-210 poisoned Alexander Litvinenko. And today, when I write these lines, a fierce critic of Putin Vladimir Kara-Murza has survived a poisoning in 2015, is in critical condition due to failure of internal organs after the second apparent poisoning. He is 35 years old.

Critics of the government Putin journalists also felt his wrath as they are entered in the lists, intimidate, threaten judicial punishment, and from time to time to kill. Opposition journalism ruthlessly suppressed, and as a result, the Russians watching the news on television, regularly fed a monotonous diet of reports in support of Putin and against the US. Some knowledgeable and experienced people understand that this is biased information, but most accept it at face value.

Many Russians still believe that the Russian press is absolutely free. One wealthy, a worldly woman from Chelyabinsk named Masha falls into this category. “The Russian press is certainly freer than the us”, she said to me over lunch in October 2015. When I asked her about journalists such as Anna Politkovskaya, who was shot in the stairwell of his house after the publication of investigative journalism about Chechnya, Mary answered very simply: “In America they also kill”.

But let us return to our new President Donald Trump. His team in the White house continues to spread outright false claims, and at the same time is to discredit CNN, calling it the generator of “fake news”. Arises the impression that he acts exactly according to the Kremlin scenario. I couldn’t help but notice that his recent objection to bill O’reilly (Bill O’reilly) (“we Have too many murderers… You think our country is so innocent?”) very much like approval Masha from Chelyabinsk.

In this whole situation, one fact remains undisputed truth. Yes, the “Martian” the Americans appealed to the Chinese, when they needed a rocket. But despite this, there is no doubt that unlike the 1990s, Americans are once again closely watching what Russia is doing. According to many Russians, Vladimir Putin again made Russia great. But now we must ensure that our own President with his promise to make America great, didn’t cause her as much damage as Putin of Russia.

Lisa wild is the author of the book “Bears on the street. Three trips in a changing Russia” (Bears in the Streets: Three Journeys Across a Changing Russia). She participated in writing the 17 published scientific and popular books, eight of which have become bestsellers. His wild career began in St. Petersburg, where he wrote articles for The Moscow Times and USA Today.