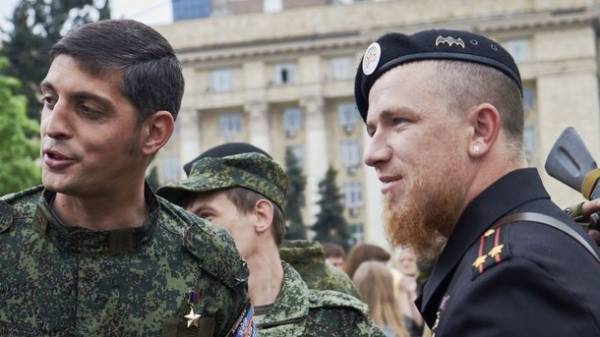 Continue to sweep the odious leaders of the so-called “DNR” and “LNR”. The last victim was the leader of group “Somalia” Mikhail Tolstoy (Givi), which destroyed the morning of 8 February in his office. Circumstances indicate that the liquidation was made either by the Russian intelligence services, or local militias. According to experts, removing the most well-known fighters, the Kremlin wants to force Kiev to hold an Amnesty in the Donbas, beating out from hands of the Ukrainian side a trump card that cannot be forgiven outright murderers. Among the next candidates to eliminate the names of the leader “DNR” Alexander Zakharchenko and his opponent Alexander Khodakovsky.

AN EXPLOSION AT DAWN. The leader of the ‘ battalion “Somalia” Mikhail Tolstoy (Givi) was murdered in his office on 8 February, around 6:10. It was one of the most famous fighters: he participated in the battles for the Donetsk airport, where “distinguished” public abuse of prisoners cyborgs, causing them to chew chevrons with the image of the Ukrainian flag.

The office Givi was in the location headed by the “battalion” on the territory of the district Ganzovka, near Makeyevka. In the original version, fighter shot jet infantry flamethrower “bumblebee”. Residents of Ganzovka said that on the morning of 8 February I heard a strong explosion. However, the “flamethrower” version was denied by the leader of terrorists of Slavyansk Igor Girkin (Strelkov), who was one of the first announced the elimination of Fat. “There has not been any “Bumblebee” — exploded IED (improvised explosive device. — Ed.) Perhaps he was not killed by the explosion — the explosion and fire was made to cover their tracks,” — said Girkin on Saturday, February 11.

The responsibility for the murder Givi representatives of the so-called “DNR” put on “Ukrainian DRG”, but Girkin’s words about the SVU doubt this. According to residents of Ganzovka, the presence of Tolstoy in his study at such an early hour could be explained by the fact that it specifically called on the “service”, explaining that some urgent matters. “Base “Somalia” is located in the center of the residential area. It is surrounded by barbed wire. The office Givi located in the center of this base. Ukrainian saboteurs was almost impossible to get there unnoticed. To remove it there would very few Russian intelligence agencies, or local militants,” — said the head of the joint coordination center “Donbas” Oleg Saakyan.

According to him, the Russian side could be interested in the elimination of Fat because he knew people involved in the destruction of the Malaysian “Boeing” July 17, 2014, and the local fighters might be unhappy with the methods of the command of Givi. “Fat was a very bad military leader, was distinguished by cruelty towards his subordinates, his unit had very heavy losses. That “Somalia” was sent into the crucible of the recent fighting at Avdeevka, where he lost a lot of fighters, and the Givi got there wound could be the first attempt to eliminate it,” said Sahakyan.

In the group “Information resistance” the death of Tolstoy predicted immediately after the dissolution of another notorious militants of the so-called “DNR” — Arseniy Pavlov (Motorola). “Turn Givi was inevitable. He constantly violated the orders of Zakharchenko, played in independence. But it was never the opportune moment to tidy up… Avdeevka a chance Zakharchenko gave: “Somalia” Givi even more hated for the aggravation of the stupidity and suicide orders, plus a strange wound. The very moment when the death of Givi’s not disappointed his subordinates,” — said the coordinator of the IP Dmitry Tymchuk.

WHO ELIMINATED. Murder Thick continued the chain of deaths of the leaders of the illegal “DNR” and “LNR”, which was launched on 1 January 2015. Then he was shot by one of the political rivals of leader of the so-called “LNR” Igor Carpenter, Alexander Bednov (Batman). The responsibility assumed by the people of Carpenter, and it was one of the few cases where liquidation was not trying to put the blame on “the Ukrainian DRG”. In January 2015, was shot by another enemy Carpenter, “folk” mayor of Pervomaisk Yevgeny Ishchenko, in may 2015 it is the turn of the commander “mechanized brigade” “Ghost” Alexei Brain, and in December — “ataman” Pavel Dremov (dad). Both also criticized Carpenter (and Napping is done, not picking up expressions) and both were destroyed in their own cars.

This sudden death of a prominent “lanerossi” is not over. At the end of September 2016 in “LNR” announced the suicide of former “Prime Minister” Gennady Cycalona, who allegedly hanged himself in his cell on 27 December 2016; supposedly died from a heart attack each Cycalona, “the Minister of agriculture and food “LC” Sergey Litvin. Heart problems caused the death of the first leader of the so-called “LNR” Valery Bolotov on 27 January 2017. When the wife Bolotov claims that her husband was poisoned. Finally February 4, 2017 in his car was blown up by the leader of the “people’s militia “LNR” Oleg Anashchenko.

Recall that the leader of the band “Sparta” Arseny Pavlov (Motorola) blew up in the Elevator of the house on 16 October 2016. In addition, on September 27 last year in the Moscow restaurant “Breeze” was shot by another prominent separatist leader of the terrorist organization “Oplot” Evgeny Zhilin. “Sweep the odious militants were Russian intelligence services. As far as I know, at least once in two weeks killed someone from the representatives of middle management, which we do not know. This is done in order to force Kiev to hold an Amnesty of the fighters, knocking out of the hands of the Ukrainian side a trump card that cannot be forgiven outright murderers like Givi or Motorola,” — said a senior analyst at the International centre for policy studies (ICPS) Anatoly Artisyuk.

“Sweep the odious militants were Russian intelligence services. As far as I know, at least once in two weeks killed someone from the representatives of middle management, which we do not know”

WHO’S NEXT. Known militants were not so much. Except Zakharchenko and Carpentry, which have already been attempted (for example, on 6 August last year in Lugansk Carpenter was wounded in the detonation of an explosive device installed in the path of his car), leaving only Igor Bezler (Demon) and a former leader of the terrorist ‘ battalion “Vostok” Alexander Khodakovsky. First known for having organized the shooting of the Ukrainian troops under Volnovaha in may 2014. However, according to Oleh Saakyan, now Butler makes no sense to remove, because he is inactive: “Likely, he already agreed and intimidated”.
But Alexander Khodakovsky is an implacable opponent Zakharchenko. Among other things, former leader of the “East” Zakharchenko called “rat” because he allegedly stole money from “militia”. In response, last spring Zakharchenko dismissed the Film as head of “security Council” of the so-called “DNR” and forbade him to engage in “public and political activity.”

However, according to Sahakyan, the Russian side is interested in Film, therefore, untimely death at the hands of “Ukrainian DRG” he’s not there yet. Alexander Khodakovsky — interesting enough figure that you can use. Perhaps he considered the role of some opposition Zakharchenko”, — said Oleg Saakyan.

And according to Anatoly Ontisuka, Zakharchenko and Carpentry will also be eliminated, not a physical but a political way. “Instead of those odious companions would lead someone more or less neutral, so they could negotiate with Kiev”, — says a senior analyst ICPS.

Own eliminate waiting even Igor Girkin. He is now in Moscow — was actively involved in social and political activities, criticizing Russian President Vladimir Putin over the loss of the Donbass. “Some time will celebrate, perhaps, my demise. I’m still surprised that so calmly walking. But I have no illusions. All bridges burned, all rubicons crossed. By the grace of God still live, but how much it enough, I don’t know,” said the terrorist.