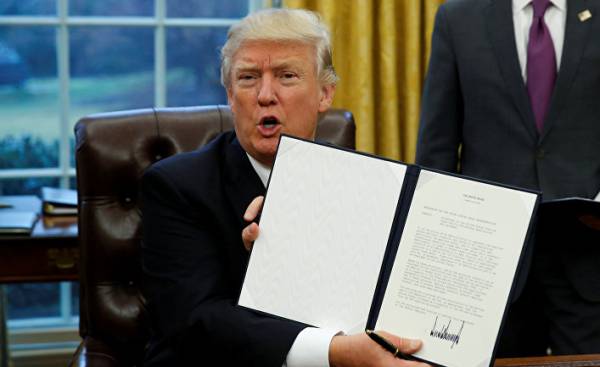 Was the first Sino-American summit, after Donald trump took over as President of the United States. The parties came to an agreement to start a new dialogue to deepen bilateral economic relations. The American side did not present serious requirements in the sphere of trade that came as a surprise, however, this does not mean that Japan can rest on our laurels. I wish Japan well used trust relations between leaders and led negotiations in cold blood.

During his visit to USA, Prime Minister of Japan Shinzo Abe all the attention paid to building relations of trust with President trump. Compared to previous US administrations Trump lacks the advanced frames. Therefore, the Japanese leader decided that Japan will not be easy to convey to him their views on the level of their subordinates.

Aggressive methods of administration trump, which is trying to impose a ban on the entry of seven citizens of certain countries are subject to harsh criticism in both the United States and beyond. On this background actions of Japan, which decided without any hesitation to rapprochement with Washington, does not seem clear. Perhaps it would be better if the Abe administration some time just watch the situation.

However, if you consider the fact that Japan is heavily dependent on American troops in the field of safety, Tokyo is not so easy to distance themselves from the US government.
Therefore, Prime Minister Abe has behaved correctly, trying first of all to strengthen the relationship of trust with President trump.

What is important is how now to take advantage of these trust relationships. Structure has been established to discuss economic issues between the Minister of Finance of Japan Taro ASO (Taro Aso) and Vice-President of the United States Michael Pence (Michael Pence), but if you will be considered only American interests, “sports diplomacy” Prime Minister Abe loses all meaning.

In a joint statement issued after the meeting, said that given the US withdrawal from the TRANS-Pacific partnership (TPP), Tokyo and Washington to discuss the creation of an appropriate structure between the two countries. However, at the moment, perfect it is unclear whether this means the conclusion of the free trade agreement between Japan and the United States.

The TPP includes 12 countries, including the US, have established trade and investment rules that have become the new standard for the world. Japan should patiently convey to US the importance of this partnership.

Earlier, trump constantly criticized Japan for what she’s trade surplus with the United States. He stressed that the Japanese market is a closed structure. During the summit President trump refrained from open criticism of Japan, perhaps because it was the first meeting of the leaders of both countries, but Tokyo should not be over-optimistic about this.

During the press conference, trump mentioned companies such as General Motors and Ford Motor, once again expressing its position, which is to increase the number of jobs in the industrial sector.

The probability that the us government will demand that Japanese automakers also increased the number of jobs and expanded its production in the United States. There is a possibility that Washington will even require you to limit the exports of Japanese cars to the American market.

Japan must firmly challenge these absurd requirements. At the same time should expand cooperation in infrastructure and energy. From Japan requires a flexible and skilled approach to the contradictions in some areas has not led to a deterioration of the economies of Japan and the United States as a whole.

Japanese companies must also closely monitor the administration’s policies trump, including the resumption of negotiations on the North American free trade area.

To present counterarguments against the criticism of the low rate currency

Concerned that trump is serious about the exchange rate. Commenting on the state of the Chinese economy, the President, trump said: “I expressed my complaint about the depreciation. The parties must be in equal conditions”.

There is a danger that trump will once again start to criticize Japan for maintaining low exchange rate. Over the past five years, Japan has never held foreign exchange intervention. During the Sino-American meeting need to continue to stand on his own.

With regard to the security sector, in a joint statement the two sides stressed that the U.S.-Japan security agreement applies to the Senkaku Islands. This is extremely important because the administration of passive trump refers to the presence in the Asia-Pacific region. This will put pressure on China, which extends Maritime expansion.

Prime Minister Abe expressed a desire to increase Japan’s role in security. It needs to clearly explain the specific steps that will help to create a strong Japan-us Alliance.

You must avoid that Economics and security were the subject of the auction. Transparent relationship that will make the people of both countries to doubt, will not bring success. About than a Golf course, said Prime Minister Abe with President trump, who loves the business? The head of Japan should disclose all the details of this meeting.