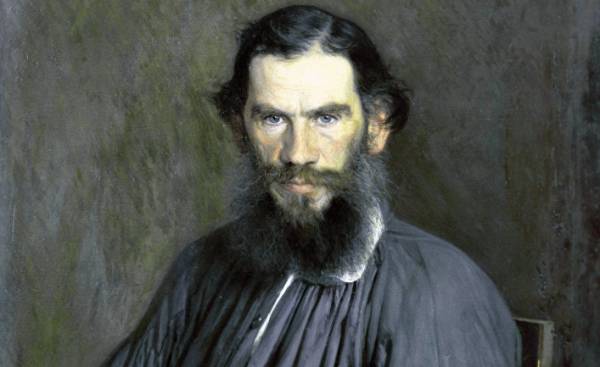 Tolstoy came to God at the age of 50 years old when he began seriously to reflect on the meaning of his life and the prospects of their own death. This is a common theme in the history of mankind. It lasted many years trying to get answers to these questions are interesting reading, because he was an educated man of the late nineteenth century, however, the most important aspect of his thought today can be considered the mindset of the fashion, concentrated on himself and pretentious to the highest artistic class that existed in tsarist Russia, because it does not require much imagination to see the similarities with what is happening today.

According to Tolstoy, in his youth, in addition to the animal instincts he was guided by the belief in self-improvement. Such a legitimate desire to improve yourself quickly turned his obsessive idea to be better in their own eyes, and not even in the eyes of God and in the eyes of other people. “And very soon this striving to be better in front of people submenu desire to be stronger than other people, that is more renowned, more important, wealthier than others,” writes Tolstoy.

In the circle of artists of the highest class, Tolstoy found that all supported him and praised him for his coarse ambition, desire for power, greed, lust, pride, anger and revenge. In hindsight, Tolstoy wrote:

“Without horror, loathing and heartache can’t remember about those years. I killed people in war, summoned for a duel, to kill, lost cards, they’ve taken up the works of men, executed them, prostituted, lied. Lying, stealing, sexual immorality of all kinds, drunkenness, violence, murder — there was No crime I would not commit, and for all that I was praised, I thought and still think my peers comparatively moral man.”

At the age of 26 years, Tolstoy arrived in St. Petersburg, and found the following views of his contemporaries:

“…life in General is evolving and… in this development the main participating we, the people of thought and people thought the main influence we have — artists, poets. Our calling is to teach people. In order not to have presented a natural question to myself: what I know and what I teach in theory, it was found that it did not need to know what the artist and poet teach unconsciously”.

This look flattered Tolstoy. Belief in the value of poetry and the development of life was a religious faith. Here Tolstoy was a well-paid priest of this faith Darwinian type for his writings (Recall that the book “Origin of species” Darwin was published in 1859, and she was popular in educated class at the time when Tolstoy was formed as a person).

Looking at the past, Thick with grief writes:

“I naively imagined that I was a poet and artist and could teach all men without myself knowing what I teach. And so I did”.

Fortunately, Tolstoy was able to think, and so he began to question the values of their faith.

“Besides, to doubt of the truth of the faith of a writer, I began to carefully observe its priests and found that almost all the priests of this faith, the writers, were immoral people and, in most, people are bad, worthless character — a lot lower than those of the people I met in my former dissipated and military life — but self-confident and happy with myself as I can be quite a people all Holy… People I loathed, myself I’m sick, and I realized that this faith was a hoax.”

“Of rapprochement with these people, I made a new sin to the pain and developed pride and a crazy belief that I am called to teach people, not knowing what.”

Speaking about his class artists and entertainers, Tolstoy explains how the people of this circle began to believe in his own importance:

“The real reason our reasoning was that we want to get more money and praise. To achieve this goal, we were able to do but to write books and Newspapers. We’ve been doing. But in order for us to do something so useless (emphasis mine) to have confidence that we are very important people”

it was necessary justification. And here it is: because we pay well and we praised other artists, we conclude that not only are we important people, but also have the right attitude.

Doesn’t it remember us about a poorly educated celebrities and stars of pop music, so-called artists today who Express their opinion on serious issues affecting the lives of millions of ordinary people, and they do it with such conviction that would make Moses blush. Among the representatives of this degenerate garbage we see such celebrities as Madonna, Springsteen, Meryl Streep, Alec Baldwin, Lady Gaga, Sean Penn, Rosie O’donnell and crazy Ashley Judd, to name only some of them.

They rage about trump, but there is a suspicion that their true hatred is turned to the millions of “unfortunate” (deplorable) people who voted for President trump, as well as their values, characteristic for the middle class, including religion and patriotism.

If people were to imitate the behavior of these actors, America have been degraded to such a state, compared with which Weimar Germany would have looked a monastery of the monks of the Cistercian. And if we followed their policy advice to their logical end, we would have lost the Republic and returned back to slavery. But in this case, our celebrities would be at the top — they have taught us, peasants, what they do not know.

Undoubtedly, few readers — perhaps even one of the readers of the journal American Thinker under the influence of the artistic class. Unfortunately, the same cannot be said about many of our fellow citizens. Some people at the sight of glitter deprived of common sense.

Leo Tolstoy was inner strength and integrity to condemn his early life filled with unbridled pride and a superficial attitude to life. As a result of hard intellectual struggle, he finally found the answers to the questions that troubled him in the lives of ordinary people.

It would be interesting to know how many representatives of the current artistic class is able to do the same? In my opinion, few, if any, will be.