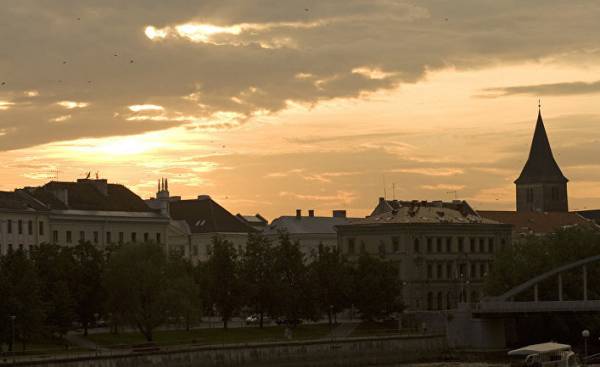 Few people outside of Estonia have heard about Tartu. It is the second largest city in the country, but the Scandinavians get to it easy. Either you arrive in the country’s capital Tallinn, and then another three hours driving or flying to Tartu via Helsinki and landed at the airport, which arrives one aircraft a day, and the airport building looks like a modern Villa and equipped speakerphone.

It’s safe to say that before the fall of the Berlin wall, it was different. Estonia was part of the Soviet Union, and in Tartu was the largest air force base in the Baltic States. There were over 100 aircraft Il and the belonging to strategic aviation. Their task in case of conflict was an attack using nuclear weapons primarily in the UK.

Base was not in the place that today’s airport, and in Raadi, manor, a suburb of Tartu. There was a huge runway. Division of the bombers were in complete isolation. The same can be said about the city. Soviet soldiers were placed around the ring, all visits were forbidden (as in the original article — ed. ed.). Once a year the residents could meet friends and family somewhere outside. On the military subject, even to mention it was forbidden.

The national Museum of Estonia was housed on a concrete runway Russian — in itself a small miracle. The Museum is housed in a building that is probably the most interesting and modern in Europe. Almost futuristic in form, the project has already won an architectural prize in France, the Estonians themselves are abound here from morning to evening, because the building has everything what can only dream of a state institution with an impressive history, beautiful building and the contents, which managed to make a very alive, without falling into banality.

First about the history. Already in 1922, in Raadi, manor housed the first national Museum of Estonia. The German and Soviet occupations — the last one lasted until 1991 did the existence of the Museum is impossible, although the collection was maintained and expanded. During the Second world war the building suffered damage, then the Russians came here with his soldiers. After the restoration of independence almost 25 years ago came the idea to restore the Museum. He had to be in Tartu, although the city is not as convenient as Tallinn, partly “because we believe that the country should be at least two cities,” says Kaarel Tarand a (Kaarel Tarand), standing at the very beginning of the project.

· New Estonian national Museum in Tartu, the second largest city in Estonia is 355 meters long and 71 wide. It cost 75 million euros (562 million DKK). Here should be added the costs associated with cleaning soil, because previously there was placed a Soviet airbase. Most of these costs are assumed by the EU.

Estonians decided that the new building will be built in Raadi, manor, but did not think that the construction will be carried out directly on a concrete runway. Three architect — Japanese, Lebanese and Italian — with a workshop in Paris won the international competition, which was attended by 108 people. They called their project “Field of memory” (“Memory Field”), and their idea was that it is impossible to turn back to the days of Soviet domination. It cannot be deleted, it should not disappear from the national memory, they said. Instead, he had to fill a new and more optimistic content.

“This is a good way to make peace with the past,” says curator Kristel Rattus (Kristel Rattus). — “To enter into his embrace, and not fight with him.”

Rattus were also in the project from the start, she shows me the exposure with a mixture of embarrassment and pride. Estonia is not particularly large, there are only 1.3 million people, and in the East it borders with Russia. The Kremlin was absolutely not enthusiastic about membership of the Estonians and other Baltic States to the EU and NATO, and they regularly feel that the Russians are breathing them in the head. Was and hacker attacks against banks and public authorities, is clearly directed from Moscow.

The mood in the Kremlin is not getting better because GDP in Estonia is much higher than in Russia, he after the restoration of independence has been steadily increasing, with the exception of those years that directly followed the financial crisis of 2008. Estonians also paid every dime one for the Museum building, while the EU has assumed the costs of rehabilitation of the territory after the Russian, who left behind the shells, poisoned ground water and different stuff, including a huge helicopter, the debris on one side and stripped of everything that could be sold.

It’s just amazing that a building mainly of glass and concrete — such a huge and yet intimate. The light in front of shop Windows and interactive booths that demonstrate how lived in Estonia from the stone age to the present day, muted. It seems that you can pass on the tale, where the action is full of drama, but in the end, anyway, yet, still pretty happy.

Rattus enthused about the Estonian language: it has some funny sounds, which are not found in any other place on the planet — if you want, you can hear them using a special device. There is also a lounge from the 1980s — the gift of one family — with a library, which tells about three things. First, that in Estonia has produced many books. Second, what was the demand for foreign classics, because many could not be issued due to the Communist censorship. And third, that the book cover was then more beautiful than now.

Samoloty of Tartu had to bomb London in case of war

· Military airfield in Tartu, which is now the new national Museum of Estonia, was crucial for the Soviet air force during the cold war. In the event of war the aircraft had “to put the atomic bombing of the UK, primarily London,” says Michael H. Clemmesen (Michael H. Clemmesen). Being a Brigadier General in the late 1990-ies he took part in creating the city’s Baltic Academy of the armed forces.

In Estonia once again became independent from the Soviet Union in 1991, the last units of the red Army left the city in 1994. Nyberg, Rene (René Nyberg), former Ambassador of Finland in Moscow, believes that Estonia now is a very tough position in regard to the desire to protect themselves from the big Russian neighbor.

Life in the cold war era

Then there are the old spears and flints. In the section of recent history illustrates how ordinary Russians lived in Estonia during the cold war. The Russian was sent here partly to work on the big enterprises, in part to dilute the Estonian population. Were Russian in Estonia, 30% of the population, even 35% if you count the military, today they make up about one quarter of the population. Most of the problems that have arisen in this regard, either solved or solved due to the demographic development, says the Kaarel Tarand. The young Russian is well integrated, unhappy old men, who are now without work, he says.

Coexistence, however, did not complete harmony, but conflict today mainly migrated in the political life, which in Estonia is extremely entertaining — with regular crises mutual complaints and frequent allegations of bribery in the highest ruling circles.

Among the many visitors who visited the Museum just after opening more than 30 thousand per month — Russian. At the opening of the Russian Ambassador was not there. But we are trying to attract that part of the population, says Taranda.

“We have a national atmosphere is somewhat different than in the free world. Left-wing parties in the West criticized us for what we show nationalist feelings, but we had to rebuild our society from the place where we were before the war. We tried to behave as best as possible and not to forget good manners.”

The Tarand 50 years, he is originally from Tartu and remembers the time before, during, and after the change. “I was in the middle of the 1980s, then I was called up for military service in the Red Army, and then I studied again at the University. We, the students, were at the forefront, we were radically adjusted, demanded independence and didn’t want to hear one of the adults calling for prudence and fear of bloodshed. It turned out that we were right, although then we, of course, could not know”.

He says he inherited courage from his parents — the father was the head of the Estonian government in the 1990-ies, and especially grandparents, who visited the camp in Siberia. Grandfather had a University education and he worked at the Museum, where he was accused that he took part in the Western conspiracy.

“If you lived in Siberia, nothing afraid,” says Taranda. In addition, he remembers how the Russian domination of Tartu a few years went to end until stopped completely.

Not a word about politics

In the 1980s, the city was no longer closed, he said. The commander of the airbase, Dzhokhar Dudayev — he later became President of Chechnya, and in 1996 was killed by Russian — Estonians sympathized with, worked on his base. In town or out of town you can get relatively freely.

On the background of the above seems a bit strange that the new Museum is almost clinically clean from the elements the stormy political development that the country experienced in the last 100 years, including during the Second world war and Soviet annexation. Kristel Rattus said that the decision to adhere to the “people’s life” was made consciously, and the rest can be found in the Historical Museum of Estonia. But he is located in Tallinn, 300 km to the North-West, and it can be argued that all this is no accident.

On the other hand, Estonians, perhaps, tired of politics, maybe they just want to know how people survived for thousands of years. In addition, the Museum itself is a powerful testimony of the era, and the Russian runway is still visible. Honestly, this place has become an international attraction, though to get here, and then get out of here — the whole problem.