Katarina Koivisto (Koivisto Katarina) in the article HBL dated July 26, talks about U.S. economic sanctions against the Russian gas pipeline “Nord stream — 2”. The project is now suspended, and if the new sanctions will come into force, they will hit investment in Europe in excess of € 700 million, affecting more than 120 European companies. And this during an economic crisis caused by the epidemic of the coronavirus.

John Bolton (John Bolton), former US presidential Advisor for national security, in his recent book light of the sanctions policy of the current us administration. Economic power needs the US to ensure national security. Sanctions should be used on a large scale, to enter very quickly and purposefully and to support them by all available means, including military. The planned sanctions should not be assessed by the courts or lawyers, because then, according to Bolton, could be lost the effect of surprise. The current manner to impose sanctions gradually and in stages, in his opinion, weakens their action. Since then the country has time to adjust the trade, to direct actions that caused the sanctions in a new direction and protect its national and international resources.

According to Bolton, the US sanctions are ineffective due to excessive selectivity and narrow focus, and because they are too slow. All the sanctions so far were not just economic, but included a huge number of different measures such as the closure of the consulates “guilty” of the country, the diplomats, assign it the status of “persona non grata”, the limitations for its athletes and so on.

For example, the U.S. imposed sanctions against governments that liquidate political opponents or traitors (Skripal) and respond with sanctions for hacking hacking American databases. Among the main targets of sanctions, countries like Iran, Syria, Russia, China, Venezuela and so on.

Sanctions are imposed against individuals and against companies. The US Treasury Department raised the question of how economic sanctions affect the dollar and increase the risk of new international reserve currencies (Euro, yuan). The current us authorities are apparently also discussed the idea of moving the sanctions Committee of the Ministry of Finance in the Ministry of justice or defence. This means that sanctions are increasingly considered military rather than economic and financial instrument of pressure.

In some cases, the US expects the negative impact of introduced or planned sanctions on the country as a whole or on her business in particular. But they never care about how to calculate the economic, social and other negative consequences for the allies or third countries.

Sanctions, particularly economic and financial, with the current US government is experiencing a period of prosperity. They are administered right and left, not having ultimately the slightest idea of the overall picture and how different packages of sanctions relate to each other — whether they weaken the desired outputs and the overall effects or, on the contrary, increase.

A large number of the entered USA of sanctions has led to the fact that global players began to develop new models and forms of activity that allows you to resist punitive measures. International economic and political power of the United States weakened. There are new alliances and centers of power, while the old increase. Other economic forces will be increasing power to strengthen its international and global position, while the States themselves undermine their own economic hegemony. 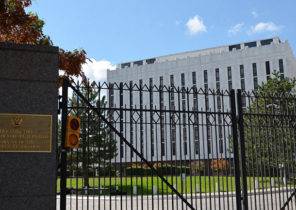