The President noted that many mayors support it, and those who mind, – destroy the state

The President of Ukraine Volodymyr Zelensky commented on the statements of mayors of some cities, speaking against the decisions of the Central government, and called their actions a separatist.

The head of state said during a visit to Khmelnitsky region, reports “Ukrainian truth”.

“They are not against us, and it is not an emotion, but primarily against Ukraine. …I can’t mayors be against the President, against the vertical of power. It’s against the state, this is pure separatism, which they cover with decentralization,” said he.

The President also stressed that, in his opinion, not all mayors are against him, and those who are against such separatists, destroying the integrity of the state.

We will remind, in Cherkassy, from may 1 decided to soften the quarantine, despite the plans of the Cabinet to impose such changes from may 11.

As reported “Today”, may 20, at the final press conference Vladimir Zelensky, speaking of the mayor of Cherkasy, has said it will not sit at the same table with these bandits. The President is surprised that the city is run by a person involved in 19 criminal proceedings.

After these words the mayor of Cherkasy told Zelensky, and became “bandit”. The official says that all criminal proceedings that are instituted, is for his political activities. And soon came a message that the mayor has filed a lawsuit against the President for his words about the “bandit”.

We also reported the desire of the mayor of Kharkov Gennady Kernes not to install President Vladimir Zelensky in the closure of the metro at the beginning of the quarantine, but then he performed a quarantine decision of the Cabinet of Ministers. 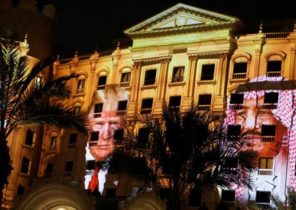