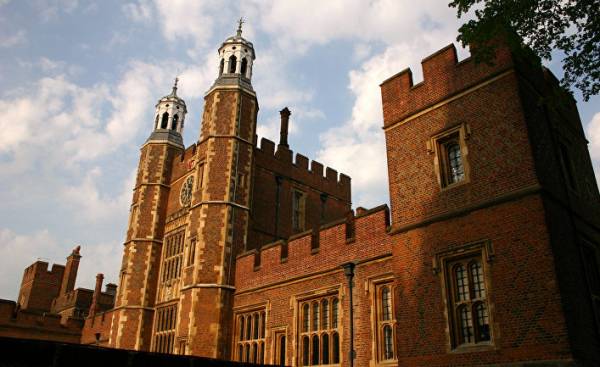 When in the 1970s, Alex Renton (Alex Renton) studied at the closed school, math teacher stuck his hand into his pants. The teacher was known for that liked to touch little boys. As a reward, the victim received sweets.

Renton told about the incident to his mother, who rushed to the school demanding an explanation. The wife of the rector insisted on the fact that she forgot the whole story.

Next semester, the teacher disappeared. Since then, the rector called Renton “dirty liar.”

“In our time, the rector went to jail for covering for pedophiles,” says the correspondent of the Helsingin Sanomat journalist and writer, now living in Edinburgh.

Released in April of Renton the book “fortitude: the secrets, crimes and education of the ruling class” (Stiff Upper Lip — Secrets, Crimes and the Schooling of a Ruling Class) had a great response in the UK, as well as laudatory, not to say bemused, reviews.

The book lists the dark trials, which had to go to Renton and the other students closed prestigious and expensive educational institutions in England. The author also wonders why so many parents of high society wanted to send their young children, especially boys, for years away from home.

“It was thought that a private educational institution tempers,” says Renton.

Since the beginning of the XIX century British boarding schools preparing leaders of the British Empire. The pain that children experienced during training — bad food, cold and harassment was considered part of school life. His upper lip was trembling. The face is always supposed to be stone.

At the same time, schools have contributed to the emergence of snobbery and the formation of a narrow circle of friends. Elite revolved in his own circle, starting at an early age. Even currently usedonmost of the highest posts in British politics, the justice system, Finance and media is come from the closed schools.

“Parents were more important for children to communicate with “the right people”, regardless of whether they then are happy or not,” says Renton.

Childhood years spent with Renton in privileged schools, were full of violence and abuse. Fear had teachers, and their schoolmates.

To be alone was too bad.

Renton was only eight years old when his parents sent him to a boarding school Ashdown house. Communication with parents, brothers and sisters has been reduced to correspondence. All letters held teaching censorship.

Crying was impossible, because of this the older boys were beaten with belts or rods. Even the springs of the mattress were not supposed to squeak at night. Those who urinate in the night, poked a face into the sheets.

The older boys maintained a strict discipline to save his own skin. If the rector heard a noise, then everyone who was in the bedroom, flogged with rods. Especially if the rector was drunk enough.

If the house complained about the spanking, it only intensified.

“I lived to be forty years before I could feel happy,” says Renton, who suffered in adulthood addiction.

Renton came out of the nightmare of the school years a few years ago when the focus of education — school Ashdown house appeared on the pages of Newspapers in connection with allegations of pedophilia.

Renton wrote an article about my personal experiences in high school. The answer came hundreds of letters. He began to systematically collect materials about the experiences of students of closed schools.

These stories were about 800, almost all of them sad. Approximately 340 cases, this was the description of brute violence or sexual harassment. It is not considered “normal” physical punishment that was lawful in the English boarding schools until 1998.

Among the authors of these sad stories about life in boarding schools, women had little: a little more than ten. The fourth part of them was subjected to sexual harassment. In schools for girls normal insults. Students also were locked in closets and empty rooms.

Physical and sexual violence began to decline in boarding schools only since the second half of 1980-ies.

In March of this year, one of the former teachers of the school Ashdown house was sentenced to 12 years in prison for sexual acts against 7-12-year-old boys performed in the 1970s. This was not the teacher who once molested Renton.

Some parents are worried due to the fact that they left their offspring to boarding schools. Renton tells the story of a mother who wanted to visit his child during the weekends.

“The rector said, “Dear lady, if You had a puppy, would You cut off his tail from or began to cut parts?”

For some parents, boarding schools were a convenient way to get rid of children with the full approval of society. In the book, Renton tells about a mother who came to pick up his son and in a hurry drove away in the car of another child. She remembered looked like her own son.

Many institutions wanted to reduce their costs, so saving on food, heating and the quality of teachers.

“School wanted teachers cheaper. So we hired people who wanted to be there with young boys,” explains Renton the cause of the spread of pedophilia.

If anyone was caught in the violence, the fact is usually hushed up. The teacher had received letters of recommendation and quietly passed the next school. So did the math teacher who molested Renton.

Renton, are related through the maternal line to the Scottish aristocracy, was in school, Ashdown house up to 13 years. The next step was Eton College — one of the most famous private schools in England. Violence has continued there.

None of them reported the torment experienced at school.

Rachel Johnson was so pleased with this school that she sent her son.

“Why? I felt that this is a school that knows his stuff,” said Johnson to reporters at the presentation of Renton in London.

When 10-year-old Rachel Johnson came in 1976 with his older brother Boris to boarding school, this school was intended only for boys. Father Johnson still insisted that the rector took Rachel.

Teachers did not beat the girl, but the Latin teacher at first did not agree to teach anyone but the boys. His decision was changed only after the girl demonstrated an impeccable knowledge of the case.

She says that the school felt such a hunger that was eating toothpaste. The experiences she described in a newspaper article “Through rose-colored glasses”.

According to Renton, now boarding schools are under greater control than it was even two decades ago. Physical punishment is prohibited. Schools compete in quality of education.

Parents and students more aware of their rights. Thanks to technology, communication with the child easier to maintain, however much he was in school.

The desire of the British to send their children to boarding schools has significantly decreased, but Russia and China deliver a new customers. Of the schools accept foreign students, because only wealthy foreign parents want to give their children the learning experience in this English language.

For the British this experience would mean the suffering, the endurance and the ability to hide my feelings.

Closed in British schools at the present time there are approximately 70 thousand pupils.

Golden time of closed educational institutions were the 1960-ies, then, they had 155 thousand people.

More than half of the parents of the students themselves attended the school.

Education in boarding schools is now more expensive than before. For example, training in Eaton in 1974, in today’s money would cost 10.3 million pounds. Now training at no extra cost worth 32 thousand pounds, which is about 37.5 million euros.

Every third student closed schools is a foreigner.