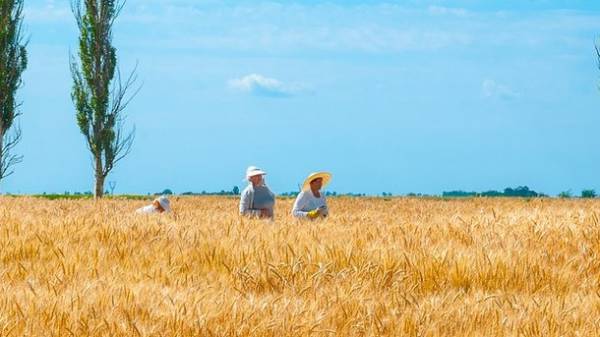 Ukraine has made progress in the ranking of the tax burden, reducing the gap with the developed countries almost two times. Also improved the business climate. At the same time, the level of welfare and life expectancy of Ukrainians is significantly behind the EU countries. The website “Today” found out what position is occupied by Ukraine in the most famous international ratings of countries.

Economy: “Progress not yet apparent”

The tax burden is one of criteria of an estimation of competitiveness of the country. The higher taxes and the higher tax rate, the more difficult the economy to compete with other countries. In 2014 Ukraine according to the rating by PricewaterhouseCoopers, took the 107th place among 189 countries in terms of tax pressure. Over the last few years the situation has improved.

So, in the beginning of 2016 the rate of the Unified social tax (Ust) was reduced from 37 to 22%. Contribution employers pay on each paycheck. The reduction rates on the one hand has allowed to reduce the tax burden, and with another – has led to the growth of the Pension Fund deficit of nearly 40 billion UAH.

In the updated ranking of PricewaterhouseCoopers Ukraine ranks 84 out of 189 positions in the tax burden. The most favorable from the point of view of the taxation climate in the UAE. And the last place the Republic of Chad. By the way, among the neighbouring countries the situation in Ukraine is not so critical as, for example, in Belarus. 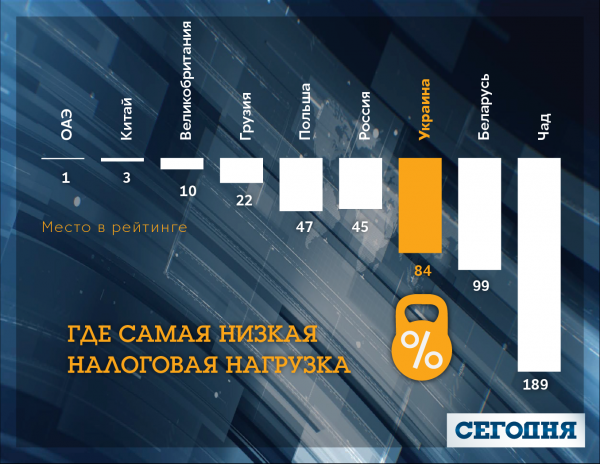 But according to the updated Index of economic freedom, Ukraine was not included even in the first hundred countries, taking the 166 out of 180 seats. The rating is developed by the research center “heritage Foundation” (The Heritage Foundation), together with the newspaper The Wall Street Journal. Analysts explain: “Ukraine’s Economy has reduced significantly and remains very fragile.” Increased gasdevice and public debt, the outflow of capital puts pressure on the currency.

“Strong commitment to structural reforms in combating corruption and opening the economy to Western investment and financial institutions will be crucial to help stabilise the economy. The government has launched a set of reforms to restore growth, but progress is still not evident,” say analysts of the Fund.

By the way, last place is North Korea, and Ukraine surpassed even the African state of Chad. 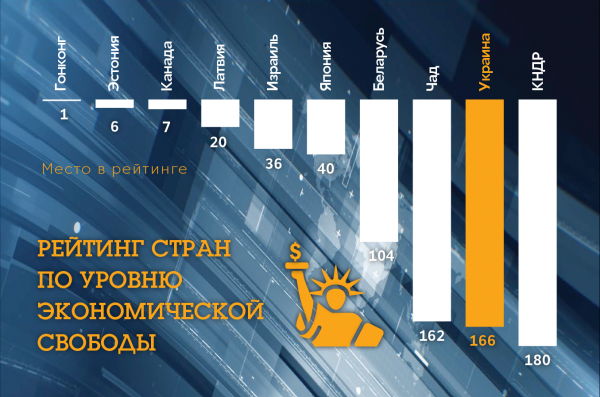 Another ranking, which characterizes the state of the economy, Doing Business from the world Bank. In the first place in the ranking is New Zealand, and Ukraine ranked 80th out of 190 positions. What, last year, Ukraine was on 83 items.

Ukraine’s President Petro Poroshenko at the meeting of the National Council reforms, commented on the new position in the ranking. “In 2011, 2012, 2013, Ukraine was on 149-m, 152-th place. Today, Ukraine’s position will be 80… the Overall two-fold increase in Ukraine is the assessment of the efforts which we are jointly attached to reform in our country”, – said Petro Poroshenko.

Compared with the year 2016, Ukraine has improved its position in terms of:

In addition, the representation of the named areas in which indicators have deteriorated or remained at the same level.
Among them: 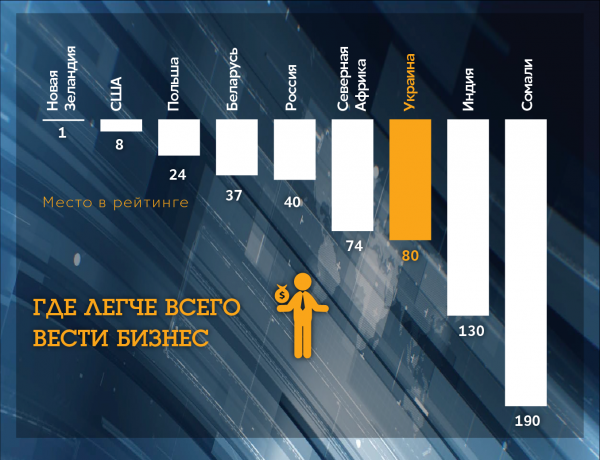 But the situation with corruption in Ukraine, according to international estimates, remains poor. The level of perception of corruption by analysts and entrepreneurs on a scale Ukraine is ranked 131 out of 176 seats. A rating developed by the international non-governmental organization Transparency International. The worst for corruption are Denmark, and most of all bribery developed in Somalia.

The demographic situation in Ukraine corresponds to European trends in the birth rate, demographers say. The life expectancy of Ukrainians is almost ten years less than the Spanish or canadian.

Life expectancy of Ukrainian – 66,3, and Ukrainian women – 76,1 years, according to the data of the State statistics service. The risk for men of dying before the age of 60 years – 40%, while in Switzerland not live to 60 years, only 8% of men. This means that out of 100 boys in Ukraine, the pension will survive only 60, and in Switzerland – 92.

In ranking life expectancy of the American Central intelligence Agency (CIA) first place is Monaco. Here live an average of 89.5 years. In last place – Chad, its residents on average live only to 50.2 years. Ukraine 71,8 year ahead of neighboring Russia, however, while the poles live on average almost six years longer. 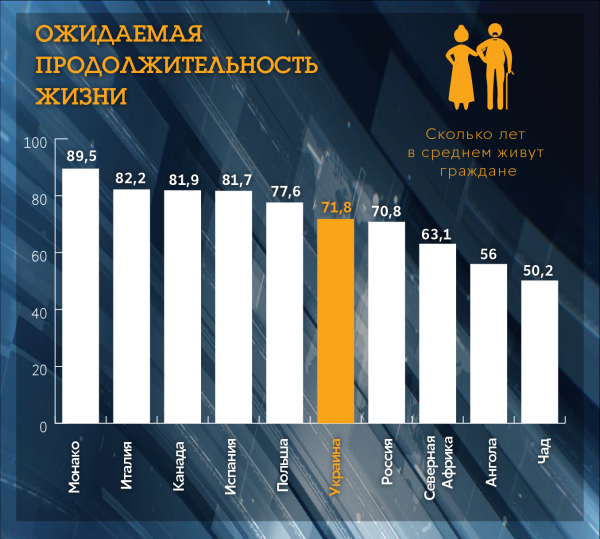 The prosperity index of the Legatum Institute (The Legatum Prosperity Index) Ukraine ranks 107th out of 149 seats. This rating takes into account the state of health, investment climate, education, human rights and freedoms, the state of the economy, etc. First place in the ranking is New Zealand. But the situation in Yemen, the Institute’s experts have assessed as the worst in the world.

Recall that in 2015 the poverty line was 58% of Ukrainians. However, in 2014 the poor on this basis was considered, only 28% of Ukrainians. This year on poverty in the first place will affect the growth of the minimal salary in half. In addition, it is expected that in October the Ukrainians “will asurement” pensions – more than five million people will receive an increase from 50 to more than 1,000 hryvnia.

Poverty is reduced if the growth of social standards ahead of inflation, says the expert of the Institute of demography Lyudmila Cherenko. In this year’s budget indicated that social standards need to grow two percentage points faster than inflation. However, as suggested in the government, the inflation rate this year will outstrip the budgeted figure. 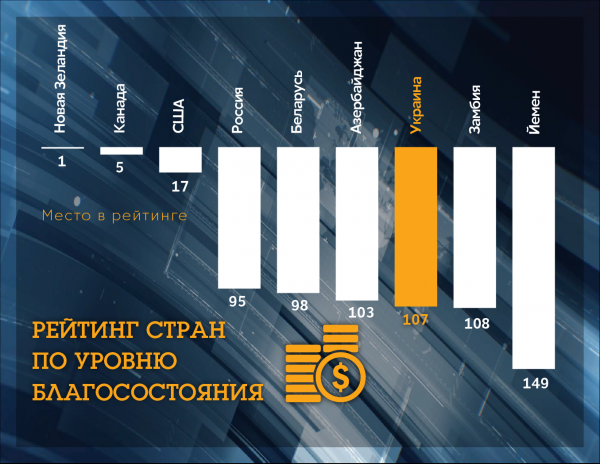 The infant mortality rate Ukraine lags behind developed countries several times. Thus, the Ukrainian children die four times more often than the Japanese. In Monaco die 0,18% of children in Japan – 0,2%, in Ukraine – 0.8%, and in Afghanistan, 11.2 percent. 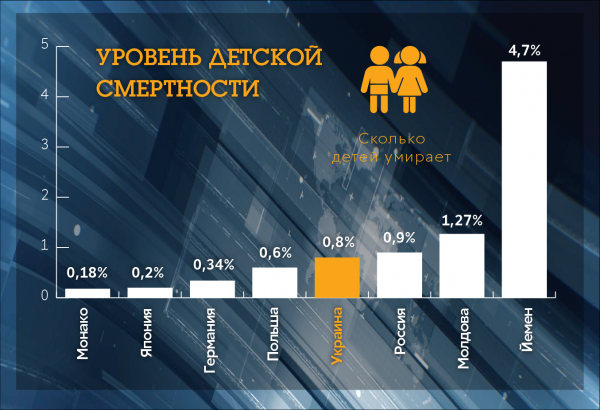 Recall, most likely in the next few years Ukraine will experience the state of “conservation crisis” and the possibility of economic development is estimated at only 5%, this is stated in the results of the study in the framework of the project “foresight”. To become familiar with the possible scenarios of Ukraine’s development is possible here.

The drought in the Crimea: Russia solve the problem by military means? (MDR, Germany)