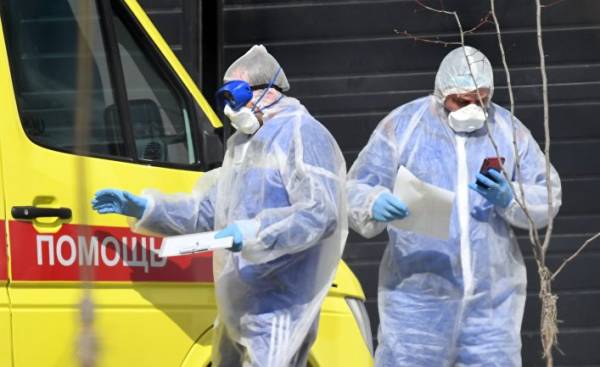 We know how to have a pandemic COVID-19: at bats in the vicinity of the Chinese Wuhan a mixture of strains of coronavirus, and last fall one of the strains took a chance and crossed the species border. He left his master (or masters) and moved to the human body. After that the virus had a ball.

However, nobody knows how will end this pandemic. With such a coronavirus, we have not yet encountered. It is unprecedented, because it is easily transmitted; it has many symptoms, from the most imperceptible and innocuous to fatal; and it disrupted the whole world. The population was very vulnerable, and the incidence began to grow exponentially. “This is a special and absolutely new situation,” says epidemiologist and specialist in evolutionary biology from the University of Chicago Sarah Kobi (Sarah Cobey).

But previous pandemics give us clues about what to expect in the future. In history there is no example that we could follow, but mankind in the last 100 years has experienced several major epidemics, which eventually did end and stopped to destroy the society. How they ceased, can become a guide to action for today’s world which is looking for ways to restore the health of the population and return to a normal life. Says Kobe and other experts, there are three important points that indicate the following: what happens next depends on the evolution of the pathogen and how it will react to the person in biological and social terms.

Viruses are constantly mutating. Those that cause a pandemic, are new enough and unusual, and therefore the human immune system does not immediately recognize in them the dangerous invaders. They force the body to produce brand-new protection involving new antibodies and other immune system components which are able to react to the enemy and attack him. A large number of people ill in a short time, and such social factors as crowding and lack of drugs may further increase morbidity. In the end, in most cases produced by the immune system to fight the invader, the antibodies have a large number of people, and they gain long-term immunity and virus transmission from person to person is becoming limited. But it may take a few years, and would rule the chaos.

To learn to live with the disease

The most famous example of this development in modern history is the Spanish flu epidemic H1N1 in 1918-1919. Doctors and health workers at the time was much less of a struggle than it is today, and the effectiveness of administrative measures such as closure of schools, depended on how promptly and vigorously applied. In the two years of the pandemic, which occurred in three waves, infected 500 million people and killed 50 to 100 million. It ended naturally when I have been ill and recovered were immune.

The H1N1 strain has become endemic infectious disease that is constantly present among us, influencing humanity less cruel. 40 years this strain has been circulating as seasonal virus. In 1957 there was another pandemic, this time with the participation of H2N2, which basically destroyed the strain of 1918. In fact, one flu virus has eliminated the other, and scientists don’t know how it happened. When it tried to do it nothing worked. “Nature can do it, and we are not,” says virologist Cramer Florian (Florian Krammer), working in new York at the School of medicine at mount Sinai.

The outbreak of SARS (severe acute respiratory syndrome SARS) in 2003 was not caused by the influenza virus, and the coronavirus SARS-CoV, which is a close relative of the culprit of the current pandemic coronavirus SARS-CoV-2. Of the seven known human coronaviruses four are widely distributed and cause up to a third of acute respiratory viral infections acute respiratory viral infection. The one that caused SARS was much more dangerous. Through active and epidemiological actions such as isolation of cases, sending to quarantine contacts and measures of social control, acute outbreaks have been limited to a few centers, such as Hong Kong and Toronto. Such deterrence was perhaps due to the fact that the disease occurred immediately after infection very quickly and clearly. Almost everyone infected with the virus appeared serious symptoms: temperature and shortness of breath. And they passed the virus once got sick, not before. “Most cases of SARS was contagious about a week after the onset of symptoms, says epidemiologist Benjamin Cowling (Benjamin Cowling) from Hong Kong University. — If they are identified in the course of this week and isolated, establishing good infection control, they do not spread disease.” Containment measures were so effective that the world was only 8 098 cases of SARS and 774 deaths. After 2004, the world never saw a single case of the disease SARS.

When a new flu virus H1N1, known as swine flu, caused a 2009 pandemic, there was a concern because it was a totally new H1N1, is very similar to the virus-killer from 1918, says Cowling. But swine flu was not as bad as the scientists thought. “In part, says Kramer, and we were lucky because the pathogenicity of the virus was not very high.” But there was one more very important reason: six months after the emergence of this virus, scientists have created a vaccine to combat it.

Unlike the vaccine for measles and small pox, giving long-term immunity, the flu vaccine provides protection only for a few years. The flu virus is very tricky, it mutates rapidly to evade the immune system. As a result, the vaccine is necessary each year to improve and to make regular people vaccinated. But during a pandemic vaccine even short actions can be a real blessing. Established in 2009, the vaccine helped contain second wave of the epidemic in the winter. As a result, the swine flu virus a lot faster followed the example of the virus of 1918, becoming the ordinary seasonal influenza, which many people today are protected by either vaccination, or by antibodies from previous infections.

The final phase of the current pandemic

Predictions about what will happen with COVID-19, is speculative, but at the final stage can be applied a range of measures, not just stops the previous pandemic. Is the preservation of measures of social control, to buy time, the new antiviral medications to relieve symptoms and the vaccine. The exact formula, say how long to keep the rules of social distancing, largely depends on the people themselves, on how well they will follow the restrictive measures, and how effectively will react power. For example, deterrence, which managed to stop COVID-19 in Hong Kong and South Korea, Europe and the United States have been taken too late. “The question of how the pandemic will evolve, at least 50% dependent on social and political factors,” says Coby.

And the remaining 50% should provide science. Scientists have rallied like never before and are working on many fronts in an attempt to find a remedy. If any of the currently antiviral drugs will be effective, they will improve the method of treatment and the number of severe cases and deaths will decrease. Very useful may also be the search of antibodies neutralizing SARS-CoV-2, as they are an indicator of immunity in recovered patients. Kramer and his colleagues developed one such method of search. There are other methods. Earlier serological analysis for antibodies was used only in local epidemics, and new methods of search will not end the pandemic. But they will identify and use the blood with a high content of antibodies to treat critically ill patients. But still these tests will allow people to quickly return to work, if it will be possible to identify ill and received immunity.

To stop the spread of the disease need the vaccine. It will take time, probably a year. But there is reason to believe that a vaccine will be effective. Unlike influenza virus, the coronavirus less ways of interaction with host cells. “If this interaction stops, the virus can no longer replicate, says Kramer. And this is our advantage”. It is unclear whether the vaccine long-term immunity, as with measles, or will it be short-term immunity, as with flu shots. “But at the moment the benefits of any vaccine,” says epidemiologist Aubrey Gordon (Aubree Gordon) from the University of Michigan.

If they are not vaccinated all eight billion people on the planet now that are not sick or getting better, then COVID-19 may become endemic. The disease will be seasonal and will affect people from time to time, and sometimes very seriously. But if the virus will stay with us long enough, it will start to infect young children. Usually they have the disease is quite easy, but not always, and while I had been ill in the childhood of adults re-the disease is not very hard. The combination of vaccine and natural immunity will protect many of us. Coronavirus, like most viruses, will live on and on, but disaster on a planetary scale it will not.