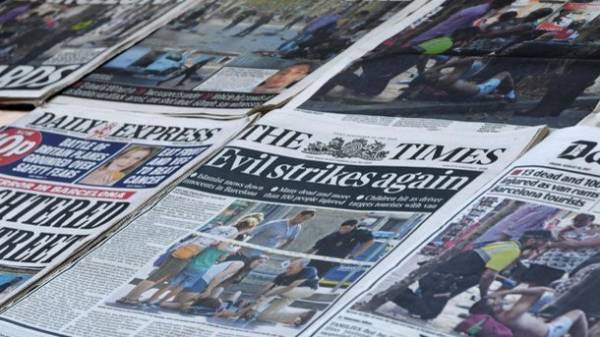 Today at 15:00 Prime Minister Volodymyr Groysman announced the completion of the cleaning from explosive devices, the area around the military depot near Kalinovka. People are allowed to return to their homes.

520 million UAH will be allocated from the state budget in 2018 to improve the skills of teachers of the first class. This was stated by the President Petro Poroshenko during a meeting with workers of education

Only 167 deputies out of 422 attended all plenary meetings of the Verkhovna Rada in September. About it reported in public organization “Committee of voters of Ukraine”. Only September held 11 plenary meetings, which on average were registered by 328 MPs. This is the worst attendance since February of 2017, when in the hall of Parliament there were 326 people’s deputies.

160 million euros will provide the European investment Bank as loan to the Kharkiv to extend the metro by 3.5 km and construction of two new stations.

$36,4 million sold today on the foreign exchange auction of the national Bank to support the hryvnia. In total, the auction were applied banks to purchase $38 million at the rate of 26,48 UAH/USD to 26, and 52 UAH/USD. NBU was willing to sell up to $100 million, Weighted average rate on the auction amounted to 26,5111 UAH/USD. To do this, the NBU entered the market with the sale of the currency on September 21 and sold $27.1 million at the exchange rate of UAH 26,2203.

Will exceed 41 million tons of grain exports in 2017/2018 marketing year – that is the forecast of the agriculture Ministry. The grain harvest is expected to reach 63 million tons.

Of 16.21 billion cubic meters of gas as of 26 September was underground storage – these are the findings of “Ukrtransgaz”. The government expects to accumulate by the beginning of the heating season 17 billion.

In the spring of 2018 , the state property Fund plans to sell the state block of stocks (78.3%) of the state energy generating company “Tsentrenergo”, said the acting head of the Fund Vitaly Trebarov. To date, the selected Advisor for the privatization of the Polish branch of the company Ernst&Young. It needs to be approved Kabinin. Once approved, the EA will start to work and finish it in a few months.

15 billion euros may be the total annual income of the new company formed through the merger of assets of German Siemens and French Alstom. Merger talks between leading global players in the engineering industry was successfully completed. The consolidation process will be “difficult” but “necessary decision” – stated in the management of both companies. Goal: to resist the European and Chinese competitors, especially the Chinese Corporation CRRC, which recently dominates the global market. It is alleged that the new company Siemens Alstom will retain its French and German roots. Siemens will receive half of the capital of Alstom, and in exchange the Germans would transmit under the control of the French a considerable portion of their production capacity.

Downgraded from “Aa1” to “Aa2” Moody’s sovereign ratings of the UK, but the Outlook changed from “negative” to “stable”. In the “breccia” the Agency notes that the first concern is the growth of the national debt of the country: this year it will approach 90% of GDP, and by the time the final exit from the EU in 2019 could exceed 93%. It is expected to decrease economic growth due to the fact that London will leave the single market and the EU customs Union.

Sentenced to five years in prison by the Supreme court of Thailand former Prime Minister Yingluck Shinawatra, recognizing her guilty of criminal negligence and connivance of corruption. According to the court, negligence in the implementation of the state program on mortgage the purchase of rice from farmers cost the country $8 billion Itself Shinawatra has denied all the accusations. Shortly before the verdict was announced, she left the country and went presumably to Dubai, where her brother, also held the post of Prime Minister in 2001-2006 and removed from office in a military coup. In 2008 in his homeland, he was sentenced in absentia to two years imprisonment for corruption and abuse of power.