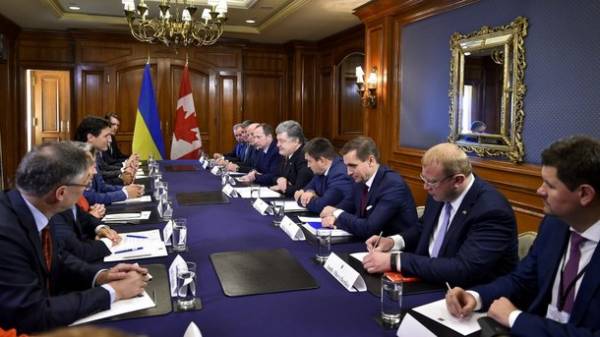 The President of Ukraine Petro Poroshenko during a meeting with media representatives following talks with the Prime Minister of Canada Justin Trudeau has announced that it is proposed to create a Strategic Commission at the highest level. It is reported by the presidential Administration.

“I told the Prime Minister at the beginning of our meeting that there is no mechanism that reflects the intensity of our partnership and its strategic nature. So I suggested to create a Strategic Commission at the highest level”, – said the President and expressed hope that the canadian side will take this suggestion into consideration.

According to Petro Poroshenko, this year marked the very significant achievements that bring our countries closer together. He recalled that last month entered into force the free trade Agreement between Canada and Ukraine.

“The agreement opens a new Chapter in our trade and economic cooperation. But it also opens doors for our business”, – said the President.

The Ukrainian head of state reported that during his working visit to Canada is scheduled to meet with canadian business, during which he will focus on very promising prospects of Ukraine.

Petro Poroshenko expressed gratitude to Justin Trudeau for the hospitality and noted that this year marks 25 years since the establishment of diplomatic relations between our countries.