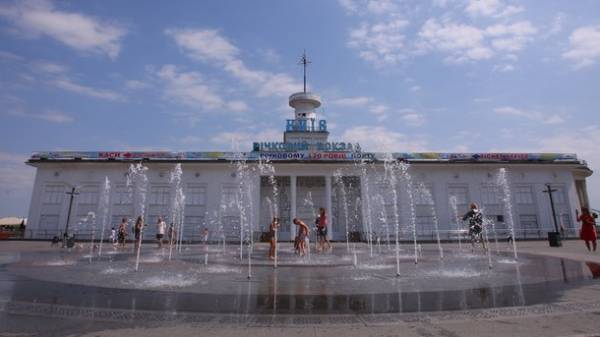 This year, the Kiev river port celebrated its 120 years. In the summer of 1897 in Kiev began construction of the new Harbor, named in honor of Emperor Nicholas II. After the consecration of the first cast-iron mooring pedestal was attached a metal plaque with the inscription about the event. And the Kiev Governor-General Ignatiev on the memory was awarded a silver pickaxe. He first turned the handle of electric drive in excavation machine “Dnepr-2”, which began to dig a new harbour. Two years later it was opened with the line of the pier at 3156 meters, one of the largest in the Russian Empire.

However, river transport Kiev was developing before. In ancient times Kiev harbour called “Butt” was on the banks of the river Pochayna. It was a major trading center between Europe and Eastern countries. Later in a sand spit that separates the Harbor from the river Dnieper, dug a channel, and Dnepr, changing the direction of the thread went this channel. He soon washed away the sand spit and swallowed Pochayna. It was washed away and destroyed 300 yards along the promenade of hem…

After that was built a temporary pier with a length of 1770 metres. On the bottom began to take passenger vessels, although it was used mainly for transport of goods: grain, water-melons, potatoes, apples, beets, salt, forest. In those days, water transport was the main, because the train has evolved. The court went on the Dnieper river and its tributaries: Desna, Pripyat.

Active navigation is in the center of Kiev began to develop thanks to the merchant and sugar David Margolin. Before the advent of the new harbour in Kiev operated by two shipping companies, which are rigidly competed among themselves. Margolin managed through negotiations to unite them and lead the company. In 1907 the United society belonged to a fleet of 69 ships worth more than 2 million rubles. The businessman came up with a luxury in those days marketing ploy. The fare from Kyiv to Kremenchug, the passenger took 20 cents, but on ships Margolin gave each passenger on a bun, what enticed a large number of passengers. By the way, thanks to the initiative Margolin Kiev students had the opportunity to make free trips about the Dnieper, he provided for their trial. In the Newspapers of the time Margolin drew caricatures, depicting seated on two steamers and was holding the loaf — the ones whom he had enticed passengers. However, this man has done for the Kiev very much thanks to his entrepreneurial spirit in the city began to operate trams and running water, there was gas street lighting, new schools, hospitals, temples.

Steamship whistles woke the inhabitants of the hem, many were out, some of the boats came into the harbour. They wore fancy, pretentious names. For Example, “Holy Princess Olga”, “Empress Maria Feodorovna”, “Governor”, “King”, “Pushkin”, “Queen”, “Pinsk”, “Orsha”, “Zhlobin”. She was equipped with electricity ship “Emperor Nicholas II” and a length of 70 meters. Ships, by the way, produced in Kiev at the plant Alexei theremin on the street forge. They were considered among the best in the Empire.
Around the harbour there was an incredible concentration of warehouses. The area quickly became overgrown cheap canteens, teahouses, restaurants and hotels. Visitors of these institutions were sailors, workers, porters. Some lived right on the courts. Working romance of the Kiev port described in his works, the writer Alexander Kuprin. It is known that upon arriving in Kiev, he asked the coachman to take him to the cheapest furnished rooms. And he took him by the Hem to the port. Leaving things in the room, he went to the Dnieper river and earned the unloading barges with watermelons and a half roubles. This money was enough for lunch and dinner. Kuprin spent several years in hotels at the river station, where he wrote his famous works.

Went ashore to the Marina of Kiev and the legendary architect, Vladislav Gorodetsky, who was floating cottage “Safari”, which was towed by a motor boat on the Dnieper. In the country the architect all the necessities of life: room for recreation, the guests, the kitchen and even portholes in the bottom through which you can observe the Dnieper fish.

Nikulin from the bikes and Yakovchenko with dogs

The present appearance of the Kiev port received in 1961 when the spring has opened a new station building, resembling a ship. It was built about seven years by renowned architects Vadim Gopkalo and Vadim Right. The building, which is already 56 years old, still impresses with its uniqueness. Its walls are faced with Inkerman limestone, and the base is made of polished granite. Tower on the roof ends with a spire with a Caravel-a weather vane. Her mast and sail made of duralumin. Inside the walls of the building were decorated with bright panels in the form of flying seagulls, paintings of Soviet workers, beach-goers, athletes, princely castles, Ukrainian women with sheaves of corn and Hetman Bogdan Khmelnitsky on horseback to the people in the background of the domes of the churches. The Windows are stained glass in the form of sea anchors. 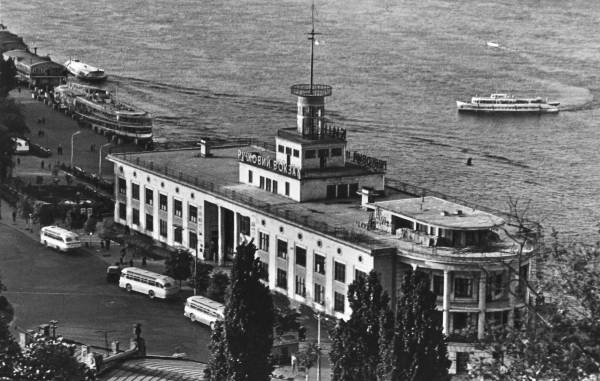 At the opening of the river port was the leader of the CPU Petro Shelest, the head of the Kyiv city Council Alexey Davydov. All was pomp, in the presence of students of the Maritime College, the pioneers, the students river College. Station-handsome opened under sounds of a brass band. It was designed for simultaneous handling of 550 passengers. Initially, on the lines of the old “wheel” steamers, later came the ships. Only to Kherson daily walked two ship — freight and passenger. Then they were replaced by ships on air cushions — rockets and meteors. They went to Cherkassy, Zaporozhye, Dnepropetrovsk, Kremenchug, Belarusian Moser and Gomel…

Then water transport was very popular among Kyiv residents and guests of the city, because traveling on water, people could save a lot of time enjoying the breathtaking scenery. 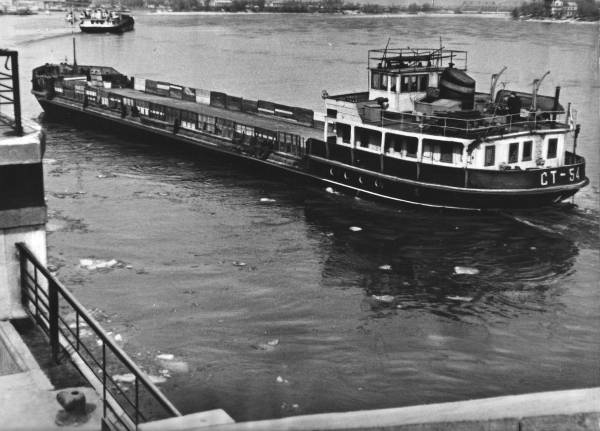 Barge. On the Dnieper river in the capital was carrying all kinds of goods. Photo: Museum of history of Kiev

Remember the station and the famous people who frequented its walls. “In the building of the river station, I once met a popular actor and actor Yuri Nikulin. He looked completely unnoticed, was going to go on a river boat in Kano to shoot the film. I even managed to talk to him. Around the actor immediately formed a crowd of passengers and employees of station. He told a few funny jokes, reminisced about the war, because he fought on the front, and then modestly dropped, left on the bus,” — says “Today” kyyevoznavets Vitaly Bakanov. He also remembers that he often saw on the river station of the Ukrainian popular actor Mykola Yakovchenko. “At that time the hem was shooting the film “chasing two hares”, and Yakovchenko came here for lunch. He sat on the bench and shared our leftovers with the courtyard dogs. He loved animals, besides the fact that the house was holding a Dachshund named fun-Fun, even talked to them. River station was very popular and lively place in Kiev, he moved a lot of ships, meteors, rockets. I went to the meteor in Dnipropetrovsk: the trip took about seven hours, the ship passed through two gateways… On the top floor of the Kiev river station operated restaurant “Odessa”. Students were there celebrating prom. Filed everything that in Soviet times was considered a deficit,” recalls Bakanov. 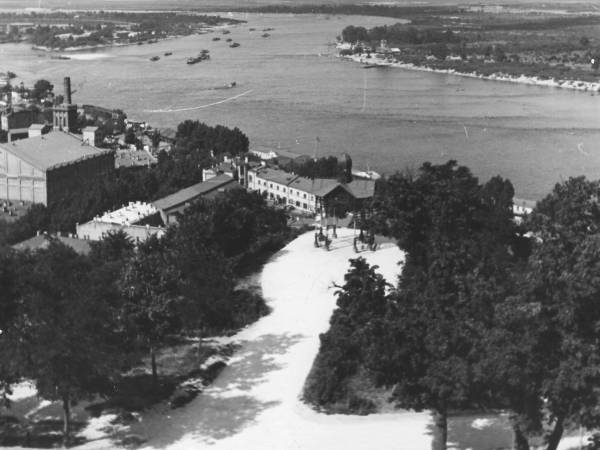 Even without the river port. Postal area is buried in verdure. Photo: Museum of history of Kiev

River station: in crevices and without hours

Before the collapse of Soviet river transport was subsidized by the state, and after the crisis, river boats became useless. The court gave for scrap or sold in the countries of former Yugoslavia. The building of the river port started to empty, though still one of the favorite places for townspeople! Near his bench on dates, and on the bridge above the roadway that led to the station from the Post square, and loved to be photographed by tourists. 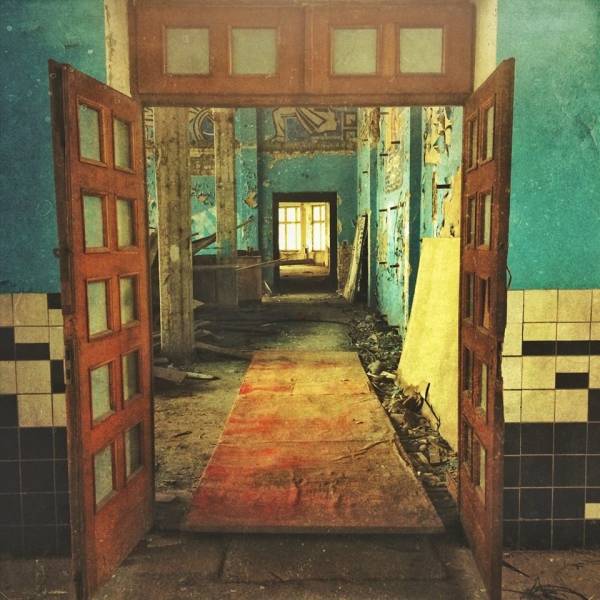 With the beginning of reconstruction of the Postal square (2011) the bridge was dismantled, and the building was locked to visitors for several years. Inside the station looks sad: launched the spiral staircase, peeling walls of once beautiful paintings. Lying around in the corners of the Soviet posters and the old schedule of ships. On one wall — diagram of the waterway of the Dnieper basin. The court went to Odessa, Nikolaev, Kherson. “I got into the building of the river port a few years ago. But since then his condition has only worsened. With the facade of the main entrance and stole his watch. The building became more broken Windows,” — says “Today” photographer Sergey Hristenko. 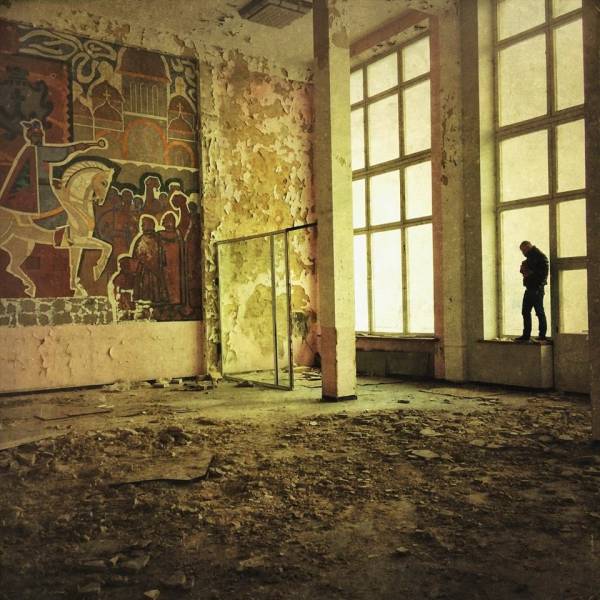 The picture with the Hetman on horseback. Photo: S. Hristenko

Two years ago, it was announced the beginning of the reconstruction of the river port. Then the ideologist of the project, the architect Andrew Vavrysh, promised that the building will take on new meaning, becoming at the food gallery (with an area of 11.7 thousand sq m). There is planned to accommodate about 15 restaurants, cafes and bars. As well as a nightclub. However, the reconstruction has not begun, and the city went a rumor that the building was bought. “The building of the river port is not alienated, the ownership has not passed to others, and it still belongs to the Kiev river port. At the moment negotiations are underway with potential investors for the reconstruction of the building. What is there exactly? Entertainment complex, restaurant gallery… Just to say I can not yet. However, the purpose of the building of the river station will be saved”, — assured the “Today” Sergey Boyko, Chairman of the Board of PJSC “Kievpost”. 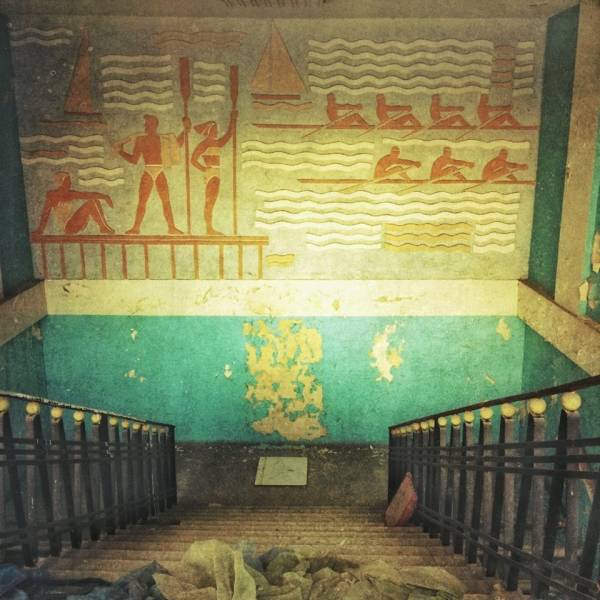 On the walls of the Soviet rowers. Photo: S. Hristenko

“You need to buy new ships”

The current composition of the passenger fleet of the Kiev river port is 10 cruisers. The port has a cargo fleet, consisting of tugs, trains (barge). Work specialcourt — OS-21 (sewage treatment plant) and SBO-1 (USCG).

“In 2015, the company changed management. And the main strategy for us is to restore the company as the port. The first step was bringing order to the fleet. In structure of port fleet has a floating dock (DOCK 3), which repaired our boats. The port obtained a licence for passenger and cargo transportation, — says “Today” Sergey Boyko, Chairman of the Board of PJSC “Kievpost”. — Currently, the port transports the sand, but there are contracts for the transportation of the booth, forests, container transportation. Next year we are planning international cargo. Are in active negotiations with the Republic of Belarus. We plan to bring this country’s oil and from Ukraine to Belarus — mineral fertilizers. Work is also underway on the conclusion of contracts on delivery of cargoes in seaports of our country.”

According to experts, to restore the capital river port and back the same traffic, you need to build or buy a more modern, comfortable passenger ships. “River port of Kiev needs a new modern river transport, to attract people and increase traffic. After that will come alive, and the river port — said Prime Minister of the opposition government of Ukraine Borys Kolesnikov. — Freight from Kiev along the Dnieper needed! The industry can work 9 months out of the year. If previously transported along the Dnieper to 60 million tons of cargo, were forced to work the entire infrastructure of our ports, then transported today to just 4 million tons. It’s a disaster. Need to do the dredging of the Dnieper, to establish direct cooperation with Belarus and the black sea ports. There are programs on revival of river transport, developed by us in 2010-2013. The current government can take them and implement. In addition to new jobs, it will give positive results for the economy of the country.”