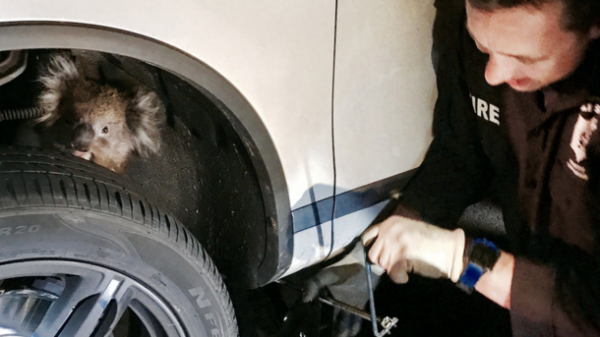 In Australia, the Koala survived after 16 kilometers next to the wheel of the SUV, clutching his suspension. The driver stopped when he heard a suspicious sound. It turned out that it’s the plaintive cries of the animal. The Koala climbed into the wheel arch when the car was on the hills on the outskirts of Adelaide – “life” with reference to Reuters.

“I felt the smell of her burned fur,” said the owner of the car Jane Brister.

Seeing the trapped animal, the driver called the fire brigade who removed the wheel to help free captive marsupials. The Koala is not damaged, but lost the baby. Attempts to find him failed.

“I was looking for this night and the next day, but couldn’t find,” admitted the woman.

Jane a few days kept the sufferer himself, watching her condition and fattening. After that, the woman released the animal back into the wild.

Koalas — species of marsupial living in Australia. They carry their young in the pouch for up to six months. Koalas are considered a vulnerable species in 2012. In the wild lives about 100 000 of these animals. Contains a lot of koalas in captivity. For example, in the zoo Queensland recently born rare white.