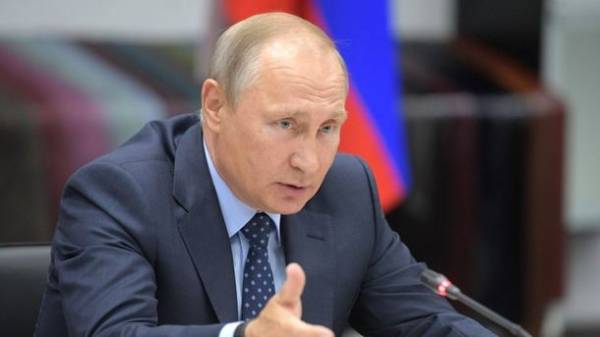 In early September, Russian President Vladimir Putin expressed support for the deployment of peacekeepers in the Donbas. However, one of his conditions was that they will only be on the boundary line. Categorically against it were made by Ukraine, stating that the UN peacekeeping mission in the case of the introduction in the Donbass should be placed in all the temporarily occupied territory. However, recently, after talks with German Chancellor Angela Merkel, Putin agreed that the mandate of the peacekeepers can be expanded. However, the details of this agreement still need to, says political analyst Volodymyr Fesenko. According to the expert, Putin could create the appearance of willingness to compromise and negotiate, thus pursuing the goal to put Ukraine in the form of a hand, with which it is impossible to negotiate.

“In fact, around the theme of the peacekeepers is because not only negotiation struggle – whose version of the mission of the peacekeepers will win and it will end, but also a political struggle and propaganda. One of the objectives in the framework of this struggle to turn the opposite direction and present a non-constructive, – said the expert, – Such actions on the part of Russia have been made repeatedly. They want to show the inability of the Ukrainian side”.

According to Fesenko, Russia allegedly demonstrates flexibility and the willingness to go forward, but, in fact, is the desire to substitute the Ukraine. But it can happen if Russia, conceding some points, will insist on those that are fundamental for Ukraine. Ukraine, in this case, the placement of the peacekeeping mission does not agree, even though she initiated her introduction, notes the expert. For example, even if Russia will agree to the presence of the mission in all the temporarily occupied territory of Donbass, the question remains about whether it will agree to the presence of peacekeepers on the Ukrainian-Russian border. And for Ukraine the fundamental issue, he says.

“But the main stumbling block – the so-called consent “DNR” and “LNR”. Ukraine categorically against it, but Russia insists that Kiev has officially agreed with the “DNR” and “LNR” on this mission. This will mean an indirect recognition of the “DNR” and “LNR”, and they become the subject and conflict, and agreements. Ukraine is absolutely unacceptable,” – said Fesenko.

In addition to control over 426 kilometers of the Ukrainian-Russian border, Ukraine insists that peacekeepers should provide security during the elections and control of heavy weapons, the expert said. If these requirements are not met, the likelihood that Ukraine will agree to a peacekeeping mission, a small. While unable to discuss the issues concerning the amount, nature of the presence of the mission and its functions, Fesenko said. On the other hand, it is also unlikely that Russia will agree to the conditions put forward Ukraine, he said.

For example, Russia firmly insists on the necessity of involvement in this decision the so-called “DNR” and “LNR”, which is absolutely unacceptable to Ukraine, so this question anwser: no, the analyst believes. The issue of the border of the Russian Federation is ready to make concessions, but only in the last instance, for example, to be controlled by the peacekeepers and the OSCE on the elections, he said.

In a further question regarding the deployment of peacekeeping mission in Eastern Ukraine should be considered by the General Assembly of the United Nations. As said Prime Minister of Ukraine Volodymyr Groysman, the issue included in the agenda.

Recall that on 22 August the President of Ukraine Petro Poroshenko said that he intends in September to present at the UN General Assembly the idea of a United Nations peacekeeping mission in the Donbas. On 5 September, Putin said they agreed to the deployment of UN peacekeepers only on the demarcation line in the Donbass to ensure the security of observers of the Special monitoring mission of the OSCE. However, he noted that this issue cannot be solved without direct contact with representatives of Pro-Russian militants in the Donbas.

On 11 September, after a conversation between Putin and Angela Merkel, the government spokesman of Germany Steffen Seibert said that the President of the Russian Federation agreed to its terms regarding what the mandate of the peacekeepers need to expand.