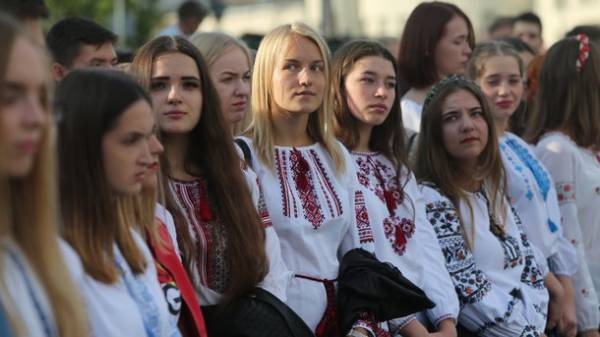 Dedication to students is an important moment in the life of yesterday’s entrant. In this day solemnly take beginners fraternities, admonishes and congratulations. After initiation, they are waiting for a new life – lectures, seminars and, of course, an unforgettable leisure.

The website “Today” visited the ceremonies of dedication to the students in several universities of Kyiv to tell you what it was. 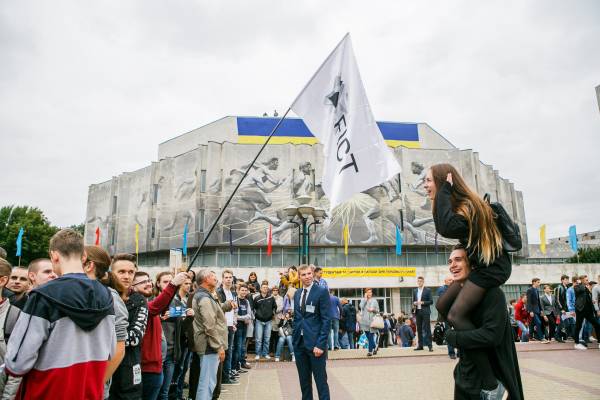 In 2017, the CRPD came 119 “wave” of first-year students. August 30 on the Square of knowledge on campus, they solemnly dedicated to the students. The ceremony began with the raising of the Ukrainian flag military servicemen of the presidential regiment, of laying flowers to the monuments to outstanding engineers and war heroes and a moment of silence in memory of those killed during the Revolution of Dignity and the fighting in the Donbass. 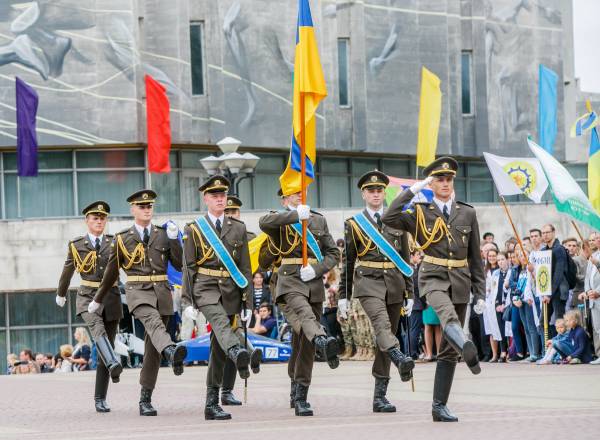 Soldiers of the presidential regiment before raising the flag of Ukraine. Photo: Danil Pavlov

Came to the celebration and the guests of honor. Before the students by the Vice Prime Minister — Minister of regional development, construction and housing and communal services of Ukraine Gennady Zubkov and the President of poznań Jacek Jaskowiak. Also to congratulate the new students arrived people’s deputies of Ukraine Oleksandr Danchenko and Dmitry Andrievsky, the first cosmonaut of independent Ukraine Leonid Kadenyuk and representatives of three universities in Poland. 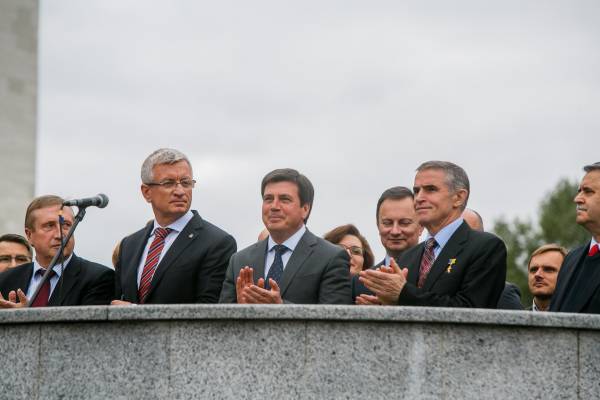 Zubko, Kadenyuk, Jasikovac and other guests of the ceremony. Photo: Danil Pavlov

After all the farewell speech was made, on the square solemnly and walked the KPI students – high achievers, athletes-the Champions, the representatives of the student ensembles and sections, holders of the title “Queen of KPI” and “Mr. KPI”.But the greatest excitement among the audience caused a demonstration of the achievements of students and staff KPI – drones and racing car. By the way, the students and staff of Polytechnic University has created a nanosatellite – two of these have already been launched into orbit. 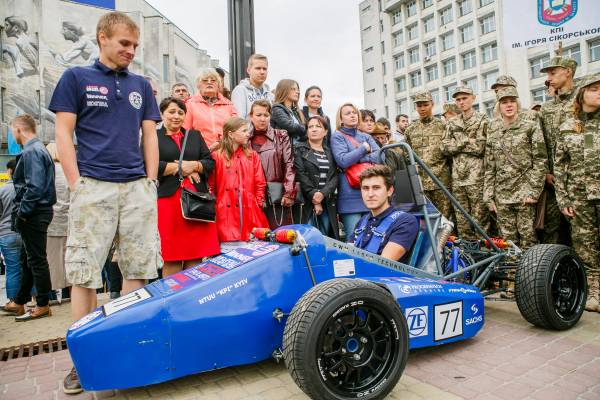 The car, designed in the CPI. Photo: Danil Pavlov

And for the audience by the Ukrainian and Polish folk dance groups, and student anthem “Gaudeamus” was performed in live performance. 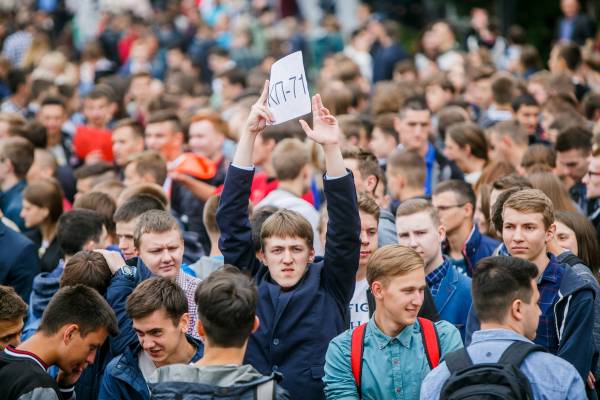 The ceremony concluded with the lighting of the symbolic torch of knowledge and start in the sky balloons in the form of the abbreviation “KPI”. Then newcomers went buildings to student tickets.

However, this day was not without incident. Consequences of night festivities of first-year students was disappointing, the mountains of garbage, “fast” for very drunk, stolen phones and shopping carts. 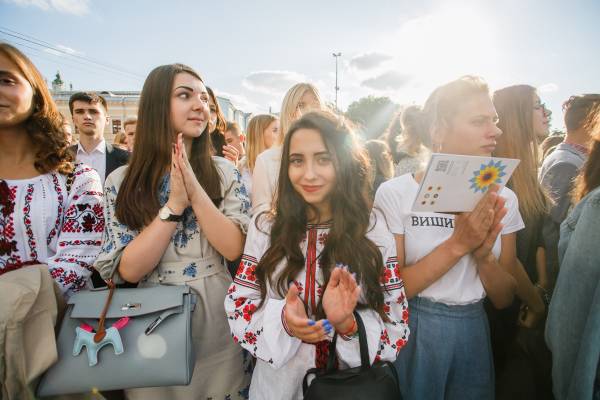 One of the oldest universities of Ukraine – Kiev-Mohyla Academy welcomed their new signings on August 31 at the Kontraktova square. 1459 first-year students solemnly walked through her academic procession led by the deans of the faculties. 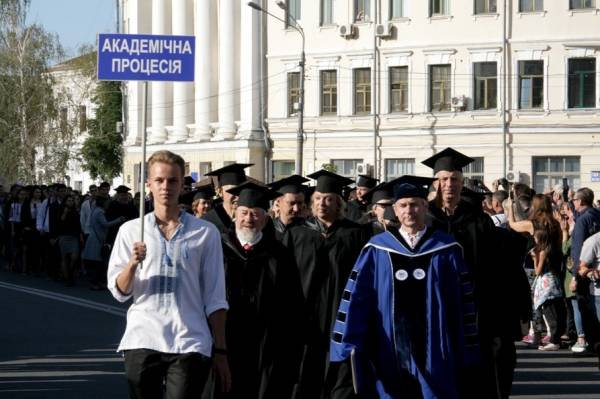 After the anthem, flag raising and traditional laying flowers at the monument Petro Sahaidachny and Grigory Skovoroda, President of the Academy, Andrey Meleshevich read to new students (or spodey as they are called in the Kyiv-Mohyla Academy) oath. 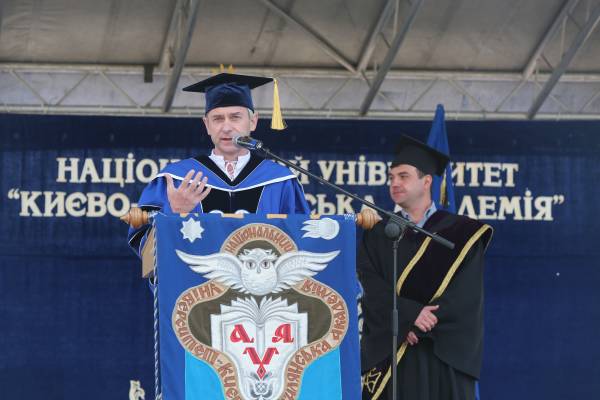 The President of the Academy, Andrey Meleshevich, the students read out the oath. Photo: Danil Pavlov

Traditionally, newcomers were congratulated by the teachers. This year with the commencement speech was made by Vice Prime Minister of Ukraine for European and Euro-Atlantic integration Ivanna klympush-Tsintsadze. But the biggest controversy among the audience was made honorary President of the Academy Vyacheslav Bryukhovetsky. Despite the fact that the entire ceremony was held in a measured and decorous, the organizers moved away from a fun tradition to acquaint newcomers with the turtle Alma – veteran (although students say this is not the first turtle in the history of the tradition) of the Academy.The students claim that, if you make a wish and Pat Alma – it will come true. And you can verify this, because Professor Bryukhovetsky wished, “that our football won”. 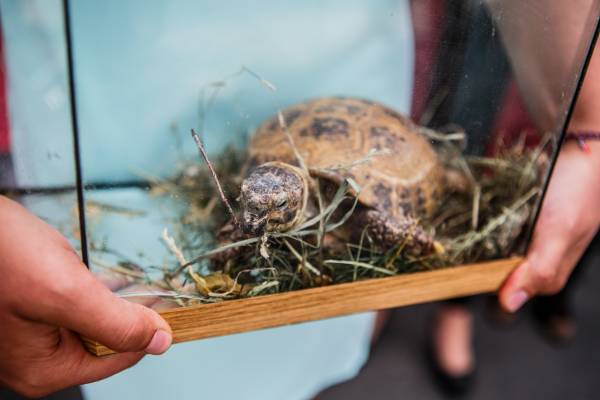 Institute of international relations – one of the most prestigious and respectable universities in the country. Here specialists who will work in the diplomatic field. Moreover, it is the most popular school among the children of diplomats, politicians, officials and businessmen. Status of the parents of many students, the IMO says more and class in the district parked cars, designer clothes and expensive gadgets for their children. However, the audience this year the representatives of the elites in imposing suits and expensive dresses quite naturally mingled with those who looked a little easier.

Beginners in IMO was dedicated on 1 September and the ceremony took place quietly and traditionally. The first training day began with a ceremony in the auditorium, which, incidentally, has not contained all wishing to attend. 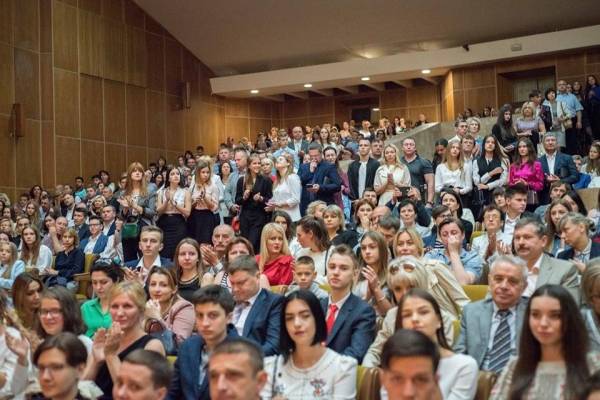 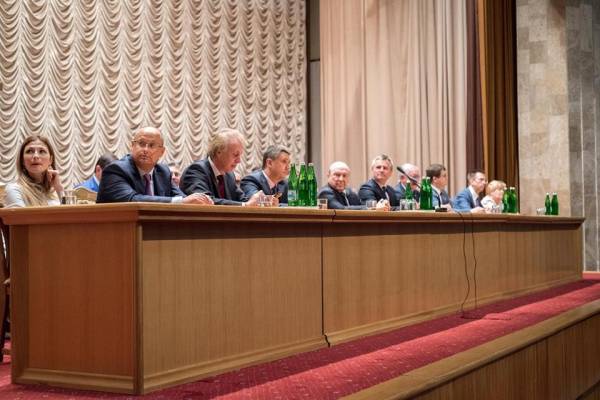 Guests of the ceremony of initiation into students of the IMO. Photo: facebook.com/UA.EU.NATO

And, for example, Lutsenko this year brought here to study son. The younger Lutsenko will study international law in the contract. 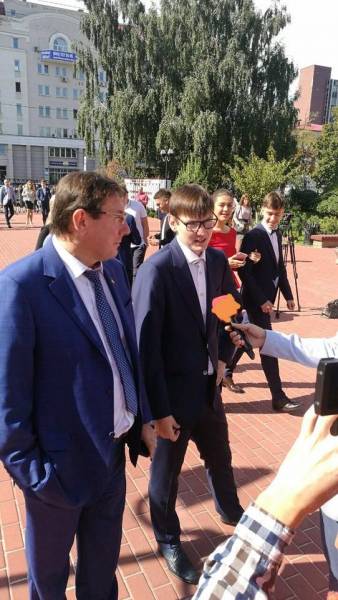 Yuriy Lutsenko with his son in IMO. Photo: facebook.com/LarysaSargan

Told the guests about the achievements of Ukrainian diplomacy in the international arena and the importance of a strong diplomatic corps in the future, shared with the newcomers their stories. At the end of the ceremony the Director of the Institute Valeriy Kopiyka again wished the freshmen success but did not fail to remind every year from IMO deduct about 10% of the students.