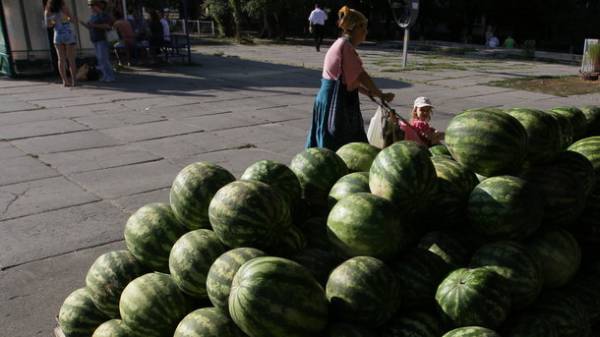 The price of watermelons will continue to grow and beat the records. This was announced by the Chairman of the Ukrainian Association of trade networks suppliers Oleksiy Doroshenko.

“The average price in the shop is now 8 hryvnias per kilogram,” — said the expert on his page in Facebook.

According to analysts of “APK-inform: vegetables and fruits”, the price of watermelons in the Ukrainian farms on average 6.3 times higher than in the same period last year and is a record for the end of August for the whole history of Ukraine’s independence. Prior to this, max thought the price August 2014, but then they did not exceed the 2.3 UAH/kg.

According to Doroshenko, the cultivation of melons is a highly profitable business, but the year was difficult both for producers and for consumers. “The weather this year was a surprise, even to the end of may, everyone expected frost. Watermelons can be planted when the average temperature is +10, but preferably even more. Therefore, planting too late. And then there was a heat wave that required constant watering,” – said Doroshenko. Also, according to him, the price was influenced by a significant increase in the cost of mineral fertilizers.

In addition, a significant share of the cost of the watermelons make up the carriage. “This year the Service of highways began strictly relate to the excess burden of vehicles, which cannot be more than 40 so this launched an entire network of several hundred weight complexes. Last year this led to blocking of roads by the drivers of trucks that could take on Board 60, and even 100 so for this reason destroyed the road even for one season,” he said.

We will remind, early melons in Ukraine was cheap, however, already then experts warned that by September, the prices could rise.