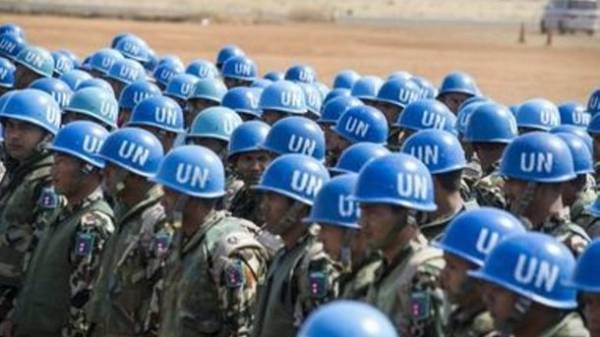 On the eve of the 26th anniversary of independence of Ukraine Petro Poroshenko reiterated the need to expand in the Donbass UN peacekeeping forces. The President of Ukraine personally presents the idea of introducing “blue helmets” in September at the General Assembly in new York. But everything depends on Russia – as a permanent member of the UN security Council, it has veto power over any decision. This speaks directly and Petro Poroshenko, but in his words, this does not mean that we should not go with such a proposal to the international community. “Today” repeatedly wrote that the system of decision-making in the UN is lame and frankly, is long overdue for reform. Increasingly, the ranks of the members of the United Nations there are proposals to correct the Statute and to correct an outright expansion in the decision-making ones, and the absolute lack of voting rights other. However, according to experts, even with this unperfect Charter there are ways around the veto of Russia and seek the consent of the UN on the deployment in the Donbas mission of “blue helmets”. And such examples in history have been.

Russia officially became the Soviet Union’s successor, continues to copy the behavior of the Soviet totalitarian regime in international organizations. According to statistics, only for the first 10 years of the UN, the Soviet Union used its veto 79 times, setting an absolute record. After the collapse of the Soviet Union Russia, as a permanent member of the UN security Council veto almost 20 times. In March 2014, after the illegal annexation of Crimea, Russia blocked a resolution which “referendum” in the Crimea (which the annexation and occupation of the Peninsula – Ed.) admitted illegal (in the end it took 27 March 2014 at the UN General Assembly). In July 2015, Russia rejected a proposal to establish an international Tribunal for the prosecution of those guilty in the crash Malaysian Boeing MH-17. Another blatant case was the use of the Russian veto for resolution on Syria, then the UN high Commissioner for human rights Zeid RA’ad al-Hussein called for limiting the veto of the permanent members of the UN Security Council. In addition to Russia the right of veto in the UN security Council also have UK, China, USA and France.

Interestingly, immediately after the signing of the first Minsk agreement in the fall of 2014, Petro Poroshenko said that the peacekeeping contingent in Ukraine will not be imposed, citing the experience of Transnistria, which has led to the fact that Moldova loses sovereignty over the territory. However, Transnistria came mainly Russian peacekeeping forces, which subsequently led to the emergence there of a Russian military enclave of Moscow there is a military base. In a year in the fall of 2015, when it became clear that Russia sabbatical and the Minsk-2, speaking at the 70th anniversary General Assembly in new York, the Ukrainian President has called for the introduction in Ukraine of a peacekeeping mission under the auspices of the UN, reminding the audience of the shameful veto, which Russia has blocked the creation of the Tribunal on the crash of MH-17.

On another is the 72nd UN General Assembly Petro Poroshenko intends to raise again the question of unfolding in the Donbas mission of “blue helmets”. “Yes, the aggressor is a permanent member of the UN security Council and, unfortunately, has the right of veto, but this does not mean that we should not seek to make this decision. The question of the UN peacekeeping mission and a military mission of the OSCE (it also need the consent of Russia, as a member of the OSCE – Ed.) moving is very hard. Everything depends on the categorical refusal of the Russian Federation to establish peace in the Donbas, moreover, the reluctance to leave Ukraine alone. But I’m sure that water wears away the stone,” said Petro Poroshenko.

With the Ukrainian President agree and our friends in Europe. In an interview with the “Today” MEP, co-chair of the Green group in the European Parliament Rebecca harms said that the discussion on the possibility of unfolding in the Donbas peacekeeping mission continues, but the decision is still pending. “Fighting continues every day. Almost every day in this terrible war of Russia against Ukraine, people are dying. Awful to see that Minsk and many agreements on cease-fire did not stop the war. Ukraine needs peace, but Russia is still interested in fomenting war. Meanwhile, I think the only way out – to the UN peacekeeping mission guaranteed and controlled so-called line of contact,” – said the “Today” Rebecca harms.

Analyzing the possibility of expanding in the Donbass UN peacekeeping forces “Today” already wrote that the “blue helmets” coming into the area of conflict, when there is established a sustainable ceasefire, the parties do not shoot, but heavy weapons and equipment is withdrawn.

During the telephone talks the leaders of the Normandy Quartet on Tuesday evening failed to agree on a cease-fire in the Donbass in connection with the start of the new academic year. According to the Vice-speaker of the Verkhovna Rada, the representative of Ukraine in the humanitarian sub-group of the trilateral contact group (TAG) Irina Gerashchenko, it will be the 11th statement on the truce during these three years. But for the first time there is a public joint statement of the Quartet on a truce. “Because until now a decision on the truce took on the TAG Ukrainian side and President always publicly supported these initiatives, and our European partners, the Russian President, Putin did not make public statements that Russia will make efforts to stop the bloodshed in the Donbass, for its influence on militants to stop firing. So, in my opinion, it is important that the results of yesterday’s telephone conversation is a joint statement”, – wrote in his Facebook Irina Gerashchenko.

If the ceasefire regime in the Donbass will be observed a minimum of two to three months, and the subgroup on safety TAG will be able to achieve the withdrawal of heavy weapons and equipment in several pilot locations (in the date the divorce was carried out only in the Petrovsky and Gold), then you can talk about the opportunities unfolding in the Donbas mission of “blue helmets”. Yes, and the decision-making process takes more than one day. According to the representative of Ukraine in the subgroup on safety TAG Yevhen Marchuk, such a mission may begin work at best in six months. “Is an official proposal, the UN security Council examines and makes a decision. Members of the UN should choose the military, because the UN troops there, they are completed each time for the respective mission. It is necessary to refer to some countries that have peacekeeping experience. They decide in Parliament whether their military to participate. Then the Council appoints the military leadership. Before doing this big Commission coming into place, studying the front,” explains Yevhen Marchuk.

In Croatia at the time a peacekeeping mission had helped to dissolve the warring parties on the front line. But there as already I wrote “Today”, was the conflict between Croats and ethnic Serbs living in the breakaway “Serb Krajina”. Yes, Serbia and former President Slobodan Milosevic was supported by Russia. But, according to experts, the Kremlin after the collapse of the Soviet Union was weak and Russia was rather perceived as a partner, not a party to the conflict.

In Donbass we are dealing with Russia – a nuclear power, a military power which at times exceeds the ability of the then Serbia. Besides, Moscow is not interested in peaceful settlement of the situation in the Donbass in Ukraine. The Kremlin, it is important to create a hotbed of constant destabilization, which could hold back the integration of Ukraine into the EU and NATO. That is why Russia in the UN permanently block any initiative associated with Ukraine. And the question of the introduction in the Donbass peacekeeping mission will be no exception.

In an interview, “Today”, the first President of independent Ukraine Leonid Kravchuk said that if the UN security Council cannot make a decision, then there should be a decision of the General Assembly, which in March 2014 had adopted a resolution on Crimea bypassing Russia’s veto.

The representative of Ukraine to the UN Council on human rights in 2006-2010, Ukraine’s representative at the International court of justice, Vladimir Vasilenko recalls the General Assembly resolution “Uniting for peace” No. 377(5). It was adopted in 1950 after the invasion of North Korean troops to South Korea. On the side of North Korea fought the so-called Chinese volunteers and Donbas today “Russian volunteers”. Then, the United States on the UN security Council tried to pass a resolution to address the crisis, but the USSR blocked all. In the end, the matter carried to the General Assembly, which adopted a resolution on “Uniting for peace” No. 377(5). The document States that if the UN security Council because of disagreements of the permanent members is unable to apply effective measures in support of international security the General Assembly is obliged to consider the matter immediately with the aim of developing recommendations to counter the aggression and support peace, including the use of armed force.

“The resolution differs from the decisions of the security Council? The decision of the security Council was legally binding. Resolution No. 377(5) referred to a recommendation it’s her fault. But the positive is that on the basis of this resolution, the General Assembly may decide on the application of any measures against the aggressor, including the armed forces. On the basis of resolution in Korea were sent to the armed forces of the United Nations, the backbone of which were U.S. forces, NATO allies. After that, there were 11 cases of application of this resolution in different variants,” – said Vladimir Vasilenko.

To apply the General Assembly resolution “Uniting for peace” No. 377(5) 1950 to enter Donbass “blue helmets” need to enlist the support of 2/3 of UN members, or 129 countries. It looks impossible, but, says Petro Poroshenko, “water wears away the stone”.