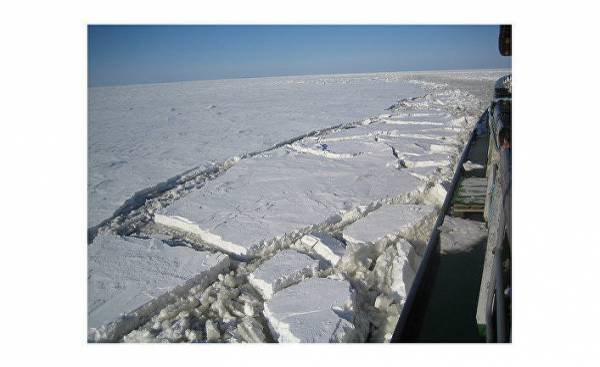 There are more details on the trump card of Russia in the field of assurance in the Arctic: we are talking about nuclear (as in the text — approx. ed.) “military icebreakers” with a laser on-Board. In addition to the appropriate size set of weapons the ships of class “Ivan Papanin” (its displacement is 8.5 thousand tons) will have on its Board a powerful lasers that can cut through ice — and possibly destroy the enemies. They will join the already existing Russian icebreaker fleet, consisting of 40 ships. The United States currently has only two icebreakers, while the United States, Canada and other countries are focusing their attention on the Arctic, where melting ice could open up access to new mineral deposits, as well as new commercial Maritime trade routes.

According to the Russian news website Sputnik News, the first of icebreakers of this series was laid in April of this year. “This multi-functional ship designed as a battle ship “all in one” — as an icebreaker and a tug. Its length is 110 meters, it is capable of speeds of 16 knots, and the range of his voyage is 6 thousand nautical miles.

The ships of class “Ivan Papanin” (also known under the designation Project 23550) will be equipped with “modular platform for weapons”. This was reported to the correspondent of Jane’s 360 one source in the Russian defense industry. The website Sputnik News quoted a Russian analyst who believes that “in addition to avionics and heavy-duty bow, the icebreakers of the Project 23550 will be able to carry on Board a missile Launcher… containers with cruise missiles “Caliber-NK” can quite comfortably be accommodated on this ship for a helicopter landing pad. In total, the Board can be installed eight of these systems”.

The same analyst says about the intriguing opportunities — class icebreaker “Ivan Papanin” may “invading to free the ship from ice captivity and to be towed” to another location. This suggests that the Russian icebreakers are not necessarily sink ships, illegally intruded into Russian territorial waters, and if these vessels are stuck in ice, the icebreakers will tow just unfortunate offenders in one of the Russian ports, where their team will face trial.

And now it is the turn to talk about lasers. “Later this year, scientists aboard the diesel-powered icebreaker “Dixon” acting in the White sea, will begin testing a 30-kilowatt laser, specially designed to facilitate the movement of ships in the Arctic region, — emphasized in the article published on the website of Sputnik News. — In this experiment will involve experts located in Moscow, the National centre of laser systems and complexes “Astrophysics” jointly with specialists of the Arctic and Antarctic research Institute of St.-Petersburg”.

One of the Russian physicists in an interview said that the new laser is intended, rather, to break the ice, and not for use as weapons. “The idea is to facilitate as much as possible the navigation in the Northern region. In addition, it is necessary to empirically verify the calculations, to create a system to measure the level of energy consumption, and to record many other parameters. For the first stage that’s enough.”

Interesting will be the next phase of testing. The United States, working 15 years ago, over which was placed on Board the Boeing 747 installing the YAL-1, came to the conclusion that this anti-missile chemical laser with power plant turned out to be a great appetite on the part of electricity consumption. However, this does not stop the Russians from developing a 200-kilowatt laser for their icebreakers (for comparison: the us army has recently received a truck-mounted laser power of only 60 kW).

A laser that can cut through ice with a thickness of two metres, will be just as effective when used against missiles and drones, as well as, perhaps, against other ships. However, in this case is important, not the lasers themselves. Important is the attention that Russia pays to the conduct of hostilities in the Arctic using the full Arsenal of weapons — from military icebreakers to the special rugged anti-aircraft missiles. It’s more the fact that the United States does, and more, that can afford a little, but with experience in the Arctic country like Canada.

Russia is showing a sequence in preparation for future wars — in the 1930s she had developed a theory of warfare using mechanized units, and today its focus is on hybrid war. Does Moscow something about the Arctic that is unknown to America?