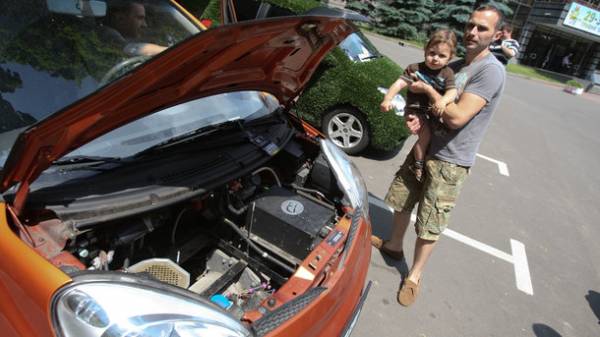 Any electric car has a lot of features which complicate the treatment of him – this applies to the process of selection and purchase. And not always the reason lies in the electric essence of this type of machines, writes Autocentre.

Traction battery – the main reason for all the extra hassle for the owner of the electric vehicle. And consequently, when buying a used electric car main task is to choose a machine with the least worn-out battery. After all, if the capacity has dropped significantly due to aging, will soon have to change it, and this is at least 5 thousand dollars for a new battery or from 1200-1500 thousand dollars for used.

To check the battery in several ways, but none ensures the absolute reliability of the study. First of all, some modern electric cars (specifically the Nissan Leaf) displays the remaining battery capacity is directly on the dashboard. The first (of twelve) extinguished “stick” indicates the fall in capacity by 16%, each by 6.5%. Much depends on the nature of the operation of the electric vehicle the first owner, but for the first year or two and when you run about 20-30 thousand km from the Leaf can die no more than one or two sticks of twelve.

Another option verification: passport knowing the power reserve model, to figure out what mileage the cluster promises, when fully charged, and how it differs from that specified by the vehicle manufacturer. To evaluate this parameter will be more difficult if the battery during familiarization with the machine is not fully charged, then you have to do some calculations (to make a proportion). This method is fairly rough and will reveal it only significant aging of the battery.

The surest way to evaluate the traction battery of the electric vehicle is to use a special computer program. For the most common in Ukraine to “train” the Nissan Leaf is an app called LeafSpy and accessible even for Amateurs. It allows you from your phone or laptop to “see” into the bowels of the battery, and not only displays the remaining life of the battery, but also can describe the state of each of the 96 cells. However, you will need another diagnostic Bluetooth or WiFi scanner that connects to the vehicle OBD II connector.

However, experts warn about the possibility of “twisting” indicators of aging of the battery. That is, unscrupulous sellers can “rejuvenate” it, distorting the displayed LeafSpy readings of the residual capacity. Important note – even the best battery with a range of about 20 thousand km may not show 100% capacity, the capacity drop should be at least a few percent.

By the way, lithium-ion battery of some electric vehicles in Ukraine have learned to not only repair garage “Kulibin”, and a very respected one HUNDRED. Therefore, even if the rating of the battery to make a mistake and buy a car with a “tired” battery, there is a strong possibility that her “cure” by replacing defective cells.

Not a current single

Despite the claims of the most ardent apologists of the electric vehicle, electric cars still have mechanical components and assemblies that wear out and require repair – how it happens and machines with internal combustion engine.

Therefore, when buying a used electric need to evaluate and chassis, and the drivetrain and brakes, and steering, and other systems. Many electric cars are built on the basis of conventional gasoline and diesel classmates. For example, the Renault Zoe uses chassis parts Clio, Nissan Leaf platform Juke, Mitsubishi i-MiEV model i. So no problems with service and repair mechanics should not be.

The Ukrainian market of electric vehicles is arranged so that the car serves mostly used, and almost all of them with a difficult history. For maximum reduction in price of importing electric cars companies buy in America and Europe the car after an accident and flooding. Here the car tidy, refresh and sell. Therefore, the task of the buyer when you select “train” to find the instance with the most quality repair: the restored geometry of the body, a good fit of its parts, properly restored anti-corrosion coatings, staff working with electrics and electronics. The latter should be given special attention, as “floaters” that the wiring and electrical fittings suffer the most.