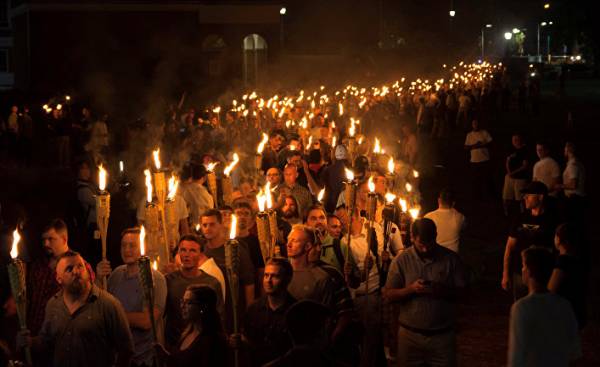 We are unable to perform, any of the groups is the category of “white Turks”… Especially since humanity entered the circles which call themselves “Kemalists” or “laicite” white Turks is also included in the structure of one Jamaat. The obvious feature of this Jamaat — hatred Tayyip Erdogan… Curses of Fethullah Gulen (Fethullah Gülen) have become a dominant cult ritual members of this Jamaat. “Homeland” for the people of this circle can be any state willing to grant asylum to all who fled from Turkey immediately after the failed coup attempt.

However, the Americans know very well who are “white Americans”. The day before yesterday in the procession, “white Americans” in the city of Charlottesville (Virginia), which ended in tragedy, was attended by “neo-Nazis”, “skinheads”, “members of the ku Klux Klan” and generally racist.

After a car crashed into a crowd during the procession of white Americans, who with the slogan “we demand to give us back America” are opposed to any kind of diversity and “civil rights” primarily black, and in the ensuing riots the city had declared a state of emergency.

What is happening in the United States and us, demonstrates one important fact. The call of Karl Marx about the unification of the proletarians of all countries for the departments of sociology and political science is now treated as Antiques. However, fascist ideology that unites “white” from different countries on the basis of international solidarity based on hostility and hatred, is still very relevant.

Trump is too “white”?

President trump immediately condemned the incident in Virginia. But the trump, judging by his rhetoric and actions — a typical white American, don’t you? Outrageous accusations against Latin American immigrants and the embodiment of “Islamophobia” in practice by introducing a ban on issuing visas for citizens of Muslim countries are the main features of its identity. And the fact that trump says “First America” and actually believes the rest of the world enemy, it shows one exemplary way.

Interestingly, and in America group of those who approve of the attempted coup on the part of the traitors opened fire against its own people, will play similar scenarios out there? That is, after once we receive the news of the attempted coup in the U.S., we will see how actors of this initiative will take refuge in Germany?