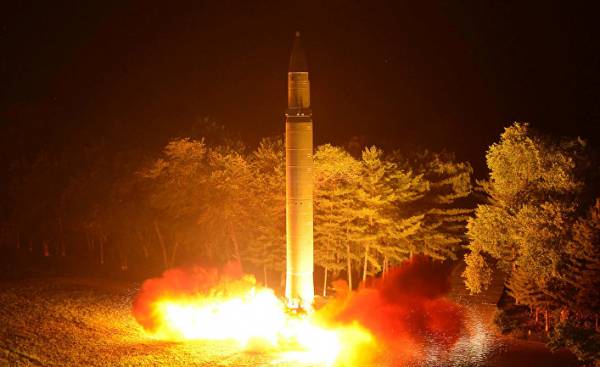 According to published on Monday the expert analysis and the secret American intelligence, its success in testing an Intercontinental ballistic missile is apparently capable of reaching the United States — North Korea owes its powerful rocket engines, purchased on the black market, probably from the Ukrainian plant that is historically connected with the Russian missile program.

These studies can shed light on the mysterious breakthrough North Korea after a series of failed launches, some of them may have been due to the disruption of supply chains and cyber-attacks, which were organized by the United States. As reported in the new study, specialist missile issues at the International Institute for strategic studies Michael Alleman (Michael Elleman), after these failures, North Korea over the past two years made changes in the design of projects and changed vendors.

This degree of aid to North Korea from the outside, would be noticeable, because the President, the trump called the main source of economic and technological support of North Korea China alone. He never put accusations in address of Ukraine or Russia, but after the recent launch of North Korean ICBMs in the past month, his Secretary of state Rex Tillerson indirectly referred to China and Russia as “key economic partner” of the country.

Experts who have studied the photographs that North Korean leader Kim Jong UN inspects new rocket engines, came to the conclusion that they are designed on the model of those which once powered missile fleet of the Soviet Union. The engines were so powerful that one missile could launch 10 thermonuclear warheads from one continent to another.

These engines were produced only in several former Soviet facilities. State investigators and experts focused on the missile plant in Dnipropetrovsk (Ukraine), on the outskirts of the territories where Russia is fighting a retarded war with the aim to isolate the part of Ukraine. During the cold war the plant manufactured the most deadly missiles in the Soviet Arsenal, including the giant R-36. He remained one of the leading manufacturers of Russian missiles even after Ukraine gained independence.

Since then, however, as the 2014 Pro-Russian President Viktor Yanukovych was deprived of power, government factory, known as “Yuzhmash”, going through difficult times. Russian canceled the modernization of its nuclear Arsenal. The plant is not used at full capacity, suffers from an abundance of unpaid bills and low morale. Experts believe that this is the most likely producer of engines, thanks to which in July was followed by two test ICBMs. They were the first evidence that the North Korean missiles is, if not the precision or technology, but the range is enough to represent a threat to the American cities.

“Most likely these engines of Ukrainian origin — in all likelihood, illegal,’ said Ellemann in an interview. — The big question is, how many are available and whether they are now Ukrainians. I am very concerned”.

He added that his guess was confirmed by the investigators of the United Nations, found that six years ago, North Korea tried to steal missile secrets with Ukrainian complex. Then was caught by two North Koreans, but the UN report States that they were trying to steal information about cutting-edge “missile systems, liquid engines, space objects and rocket fuel systems”.

Now investigators are confident that in the chaos of post-revolutionary Ukraine Pyongyang has resumed his efforts.

A detailed analysis of Alleman is a public confirmation of what intelligence officials have long been saying eye to eye: the basis of new missiles lies such complex technology that the North Koreans simply could not so quickly to switch it. Looks like they first started the new engine in September — this means that to go from the basic stage to launch ICBMs, it took them only ten months — a short period of time, of course, if they failed to purchase blueprints, equipment and experts on the black market.

The white house did not comment on these estimates of intelligence.

Last month “Pivdenmash” has denied reports that the plant is struggling for survival and sells its technology abroad, particularly in China. On the web site of the company States that it has never participated and is not going to participate in “transfer of potentially dangerous technologies outside Ukraine”.

Us investigators do not believe it, although talking about the absence of any evidence that the government of President Petro Poroshenko recently visited the White house, was put on notice or was in control of what happened inside the complex. How Russian engineers designed engines RD-250 was in North Korea, still remains a mystery.

Ellemann could not exclude the possibility that a large Russian rocket company “Energomash” strong ties with the Ukrainian complex played a role in the transfer of technology of the engines RD-250 in North Korea. He said that the remaining engines of the RD-250 can also be stored in Russian warehouses.

But the fact that powerful motors really went to North Korea, despite numerous UN sanctions, evidence of the insolvency of the intelligence services of a number of countries who carefully monitor Pyongyang.

In 2014 as President Barack Obama ordered to intensify subversive activities against North Korean missile systems, U.S. officials carefully monitored their success. Last fall it seemed that they won the biggest victory, when Kim ordered the roll flight tests “Musudan”, medium-range missiles, which was in the focus of American sabotage.

But as soon as Kim gave the order to suspend testing of this system, North Korea has presented to the attention of the public engines of a new design. And these tests were much more successful.

American officials would not say when they became aware of this change of direction. But much indicates that they are late.

On Sunday, Leon Panetta, former CIA Director, said the transfer channel to CBS Face the Nation that, in its quest to create a workable ICBM, which can be used with nuclear weapons, North Korea was ahead of the intelligence community, did not expect such a pace.

“The speed with which they managed to achieve such results is, frankly, surprised both the United States and the entire world,” he said.

It is unclear who is responsible for the sale of missiles and development of knowledge and intelligence there are a variety of theories about the details of these events. However, Ellemann offers a serious version based on circumstantial evidence, the center of which cometh in the decline of the factory complex and underemployed engineers.

“I feel for these people,’ said Ellemann, who came to the factory ten years ago, when I worked on Federal projects for the reduction of armaments. They do not wish anyone evil.”

Dnepropetrovsk called the fastest dying city in the world. Huge factory to the South-East of Kiev, once the generator of the cold war, has difficulties with finding customers.

The American intelligence noted that North Korea decades using the services of a black market missile technology, and it builds its own infrastructure of universities, design bureaus and factories.

She also gains the help of the professionals: in 1992, the staff of the Moscow airport detained a team of experts on missiles, EN route to Pyongyang.

For North Korea it was only a small hitch. She got hold of the drawings for compact missiles R-27, which was produced for Soviet submarines. They were created in the design Bureau. Makeeva, the military-industrial complex in the Urals, where he worked the same experts who were detained in the Moscow airport.

However, the R-27 was too complex, and the North Koreans failed to reproduce and successfully launch.

In the end they turned to an alternative source of secrets engines — the Ukrainian factory “Pivdenmash” and its design Bureau “southern”. The engines of this team was potentially easier to copy, because they were not designed for close submarines, and for larger land-based missiles. This has largely simplified the task.

In economic terms, the factory and design Bureau faced new obstacles after Russia in early 2014, invaded the Ukraine and annexed Crimea. Thus began a period of cool relations between the two countries, and Moscow refused from his intention to charge “Pivdenmash” issue new versions of the missile SS-18.

In July 2014 the report of the Carnegie endowment for international peace, sounded the warning that this kind of economic decline can lead to the fact that the Ukrainian missile and nuclear experts “will lose their jobs, and their valuable skills will be able to be in the service of unpredictable regimes and distributors”.

The first signs that the Ukrainian engine fell into the hands of North Korea, appeared in September, when Kim led the ground test of a new rocket engine, which analysts described as the biggest and most powerful to date.

Norbert Brugge (Norbert Brügge), the expert from Germany, said that the photos run the engine say about the strong resemblance between him and the model of the “Yuzhmash” RD-250.

Even greater alarm was raised after the second ground launch of a new North Korean engine in March and carried with it the launch of new medium-range missiles, the Hwasong-12, in may. She broke North Korean record for distance flight. Its high trajectory, if it is to equalize, approximately 2800 miles — far enough to fly and to fly a U.S. military base in GUAM.

The first of June Ellemann left a disturbing message. He argued that a powerful engine was obviously made “by another manufacturer, unlike all other engines that we have seen before.”

According to Elleman, diversification at the expense of the new line of rocket engines was important North Korea because thus she was nisprovergatelya assumptions of the West about rocket power: “We could expect surprises.”

That is exactly what happened. The first of two tests North Korea’s new missiles Hwasong-14 in July reaffirmed the range of its flight, sufficient to threaten Alaska and it was for the intelligence community completely by surprise. The second rocket flew a distance sufficient to reach the West coast and maybe Denver or Chicago.

Last week in the “Bulletin of atomic scientists” and provided a detailed analysis of the new engine, as well as insights about what it was modeled after the RD-250. This finding, according to analysts, “raises new and potentially ominous issues.”

Tooltips are not only new threats from North Korea, but also new risks of the global missile proliferation, since the plant remains in a poor financial condition. Today, it produces trolleybuses and tractors, and the management is looking for new contracts for rockets, which will help the company to partially regain its former glory.