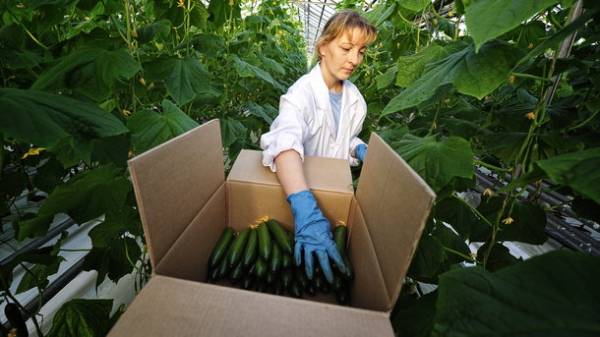 The end of the first decade of August in Ukraine was marked by the rise of prices for cucumbers. It happened just in the period of active salting of this product for the winter. According to “info-SHUVAR”, the prices of greenhouse cucumbers in the opt on the Lviv market has grown for several days on 2 UAH/kg (approximately 27%) and amounted to UAH 9-10/kg. Also, since the beginning of the week rose in price cornichons (tiny pickles, the most valued in conservation). If on 7 August, a kilo of cucumbers in the opt asked 6,5 UAH to 15 UAH. Stable in price stay only salad, so-called dlinnoplodnye smooth cucumber — all the summer the prices fluctuate at the level of UAH 5/kg, writes UBR.

A similar pattern is observed in other wholesale areas of the Ukraine. Thus, the market Unexpected (Kherson region), the cost of cucumbers varies in the range of 7-10 UAH/kg, in Kyiv wholesale market “Capital” in conventional cucumbers are asking 5-12 UAHkg, and for zasolochnye 15-20 UAH/kg.

According to analysts of “APK-inform: vegetables and fruits”, during the first week of August the prices for these products increased on average by 38%.

According to industry experts, to increase the price of cucumbers of Ukrainian farms are able, first of all, due to the very limited supply. Sampling of ground cucumber a small because of the heat. At the same time, the supply of greenhouse products is also low, because the first harvest has been sold, and to the implementation of a cucumber the second turnover yet started a single plant. However, price stabilization is near.

Cucumbers go on sale in fact, in the same price range as a year earlier

“Today, the price of cucumber is relatively stable due to the gradual increase in the collection of greenhouse cucumber of the second turnover, which compensates for off-season reduction products. It should be noted that this situation is quite traditional for a specified period,” — said the head of the project “APK-inform: vegetables and fruits” Alexander Horev.

According to the expert, today the cucumbers go on sale in fact, in the same range as the previous year’s field cucumber of 6 UAH/kg, and greenhouse 8-10 UAH/kg.

However, many farmers do not rule out further rise in price while maintaining the current rate of sales. According to the Chairman of the Board of PJSC “Alliance” (Kharkiv oblast) Sergey Lunin, Ukrainian greenhouse owners it is harder in the face of fierce competition from cheaper imports, primarily from Turkey. Economy forced to adapt.

According to the city, before most of the production went to Russia, but after the embargo had to shift to other markets. This had to change and varietal structure as the hybrids that were in demand on the Russian market are not in demand in other countries. In the domestic market have to compete with products from Turkey, which is also affected by the Russian sanctions.

As previously reported, the Director of Agroanaliz Vadim Dudka, in the second half of July (when I started collecting a soil cucumber) weather conditions were no worse than a year ago. But early picking of cucumber were 35-40% lower than usual, as plant growth has slowed due to the cold spring. Therefore, in some farms harvest in later grades “ahead” in the aging early varieties, which is quite unusual.

Simultaneously with the reduction in the second half of July increased the demand for cucumbers from the processors.

The demand for conservation

Last year, the price of cucumbers was approximately at the same level. But if before the canneries refused to take the cucumber 4-7 UAH/kg, and the gherkins 10-12 UAH/kg, now willing to buy raw materials. According to the expert of the fruit and vegetable market in Eastern Europe Tatiana Getman, in the last two years at the canneries remained significant stocks of unsold products – again, because of the embargo Russia.

But in this season the plants recovered their purchasing activity. However, over the years, according to Getman, the relationship between farmers and processors has deteriorated. Since some of them owed for raw materials. Horev confirmed that the situation of processing enterprises remains difficult for several recent years, and the purchase price for processing last years is almost the same with fresh market.

“Regarding the relationships between processing plants and farmers, the problem really exists. In the first place, according to the manufacturers, the current situation is caused by the fact that often the factories are trying to bring down the price of raw materials that it is unprofitable. Moreover, there are large deferred payments (sometimes more than six months), which is a substantial reason for refusal of cooperation,” said Horev.

According to him, processors began to move on its own production of cucumber that were generally more favorable than purchasing from, because in addition to the best prices refiners get more high-quality raw materials.

Therefore, large greenhouse complexes, according to the city, more oriented to sales in retail networks. This is one of the most stable channels, ensuring regular deliveries throughout the season.

Overall, as predicted by industry experts, after the mass exit on the market of greenhouse cucumber of the second turnover, prices should at least cease to grow. And maybe to start to decrease. But adds that prices could impact export growth. For example, in Poland in this year’s crop of cucumber was less than 8% from last year.