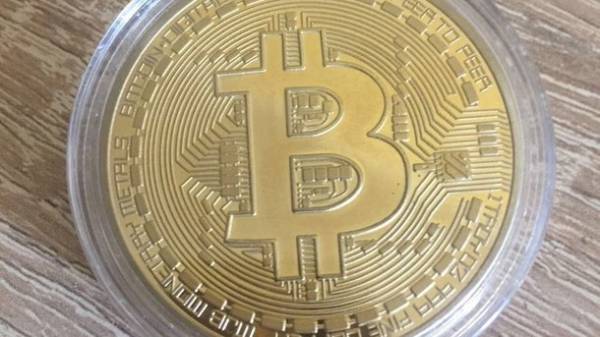 The national Bank of Ukraine (NBU) notes the absence of the so-called “Bitcoin” a specific legal status in Ukraine. This was reported by press service of the NBU on his page in Facebook.

“N the moment Bitcoin has no specific legal status in Ukraine. The determination of such status is complicated by the lack of a consolidated approach to the classification and regulation of Bitcoin transactions in the world,” – said the Deputy head of the NBU Oleg Churiy.

Curi noted that in a number of countries officially permitted transactions with Bitcoin. Usually, Bitcoin is regarded as a commodity or investment asset for tax purposes is subordinate to the relevant legislation. In some countries recognize Bitcoin monetary unit.

For example, the legislation of the European Union is currently klassificeret Bitcoin as “a digital representation of value that is not confirmed by the Central Bank or governmental authority and is not bound to a legally established exchange rate and which can be used as a medium of exchange for the purchase of goods and services, their transmission and storage, and can be purchased in electronic form”.

The exchange of traditional currencies on a Bitcoin unit in the EU are exempt from paying value added tax”.

However, in Israel Bitcoin does not fall under the legal definition of currency nor a financial security, either as a taxable asset. Every time when Bitcoin is sold, the seller must pay tax on capital gains.

The people’s Bank of China considers Bitcoin a virtual commodity and not a currency, and its sale may be subject to VAT. Such an approach – and Japan, where Bitcoin is recognized as “value of such asset.” The sale is subject to the Japanese equivalent of VAT. 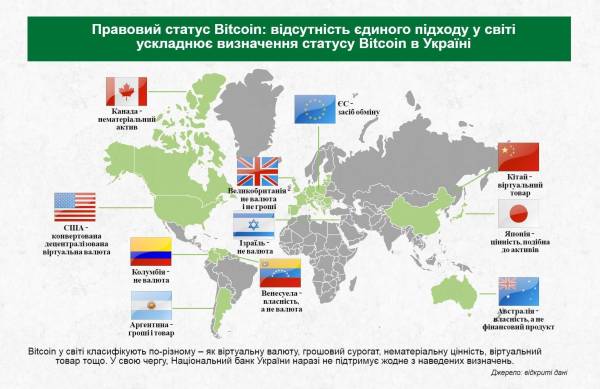 Infographics: the press service of the NBU

“Thus, in different countries klassificeret Bitcoin for virtual currency, a substitute for money, the intangible value of virtual goods and the like. For its part, the national Bank of Ukraine has yet to officially support either of the above definitions,” said Curi.

Thus, according to the Deputy head of the regulator, the national Bank began a dialogue with the Ministry of Finance, State fiscal service, the State service for financial monitoring, the National Commission on securities and stock market National Commission, carrying out state regulation in the sphere of financial service markets to develop a common position concerning the legal status of Bitcoin in Ukraine and its regulation.

“With the participation of these state agencies, this issue will be considered at the next meeting of the financial stability Council to be held until the end of August,” – said Cure.

Recall, according to the law, Bitcoin cannot be used in Ukraine as a means of payment, however, to transfer the cryptocurrency to hryvnia and Vice versa is not forbidden. So, in Odessa in may earned Ukraine’s first Bitcoin ATM.

Thus the question of legalization of electronic means of payment in the country is quite acute. For example, the lack of legal framework makes it impossible to work PayPal in Ukraine. 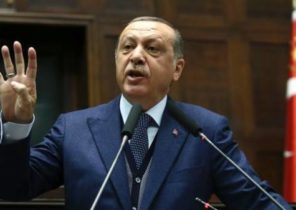