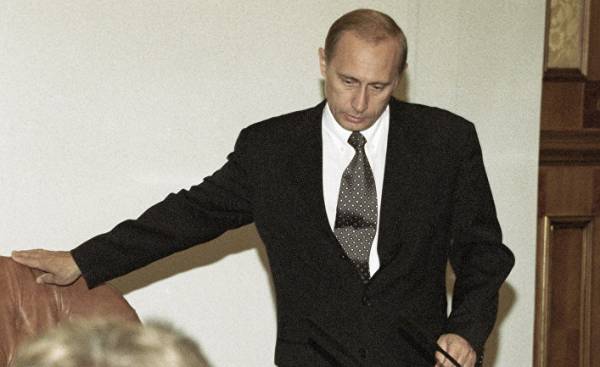 While on vacation in Siberia, in free from spearfishing time, Putin was an opportunity to rethink made them work and think about how he will act in the future, remaining in charge of Russia. Even if he has not yet announced his decision to run for a fourth term, his intentions do not cause any doubts. Given that all rivals, including Alex Navlnogo, was harshly removed from his path, we can assume that the victory in his pocket.

Today marks exactly 18 years since the advent of Vladimir Putin in the Russian political scene. With the exception of Joseph Stalin, none of the politicians so long governed. August 9, 1999, unknown Putin, the former head of Russian counter-intelligence, was appointed Prime Minister. In his speech to Parliament he declared his intention to restore “order and security” and preserve “the territorial integrity of Russia” and about his desire to run for the presidency next year.

In the atmosphere of chaos that prevailed at the end of the era of Yeltsin, former Soviet KGB agent represents stability and order. He promised to immediately deal with the Chechen militants who roam in the North Caucasus and “dunk them in the toilet.” Representatives of political and financial circles almost unanimously disposed towards Putin. “He is a man of action who has a clear view of what is good for Russia”, — claimed one of them at the time. And that is as a benefactor, he was elected President of Russia March 26, 2000, at the age of 47 years with 52,52% of the votes.

After a brief rapprochement with George Bush during the events of September 11, 2001, the President of Russia is gradually moving away from the West. After the US military operation in Iraq, he no longer considers America to be a role model and not looking for her support. According to Vladimir Putin, Russia needs to get out from under American and Western influence. His goal is to restore the parity that existed during the cold war between the United States and the Soviet Union.

Erupted in 2013, the crisis in Ukraine marks the final break between Russia and the West. The refusal of President Yanukovych to sign an economic agreement with the EU in favor of an agreement with Russia leads to the Maidan and the overthrow of the Pro-Russian regime in Kiev. Moscow sees this as a coup. 23 Feb 2014 power in Ukraine into the hands of the opposition. Pro-Russian troops occupying Crimea. The Peninsula returns to the fold of Russia. The US and its allies have imposed sanctions against Russia, which from the standpoint of international law, violated territorial integrity of Ukraine, annexing the Crimea. The Ukrainian issue is still unresolved and is a major bone of contention between the US, Europe and Russia.

The war in Syria, which Putin is investing more power, added tension to relations between the parties in 2013. The Western coalition seeking to overthrow the Assad regime, continuing at the same time to bomb ISIS (a terrorist organization banned in Russia — approx.ed.) and supporting various opposition cells. The main aim of Russia’s intervention in the Syrian conflict is to save Assad’s ally and keep its strategic interests in Syria. America and Russia are pursuing the opposite goals. This “proxy war” is the cause of many diplomatic clashes, which will lead to a serious cooling of relations between the two countries.

Despite the coming to power of Donald trump, who violently during the presidential campaign for the rapprochement of America and Russia, at the moment the two superpowers are on the brink of a new cold war. Recently, the U.S. Congress strengthened the trade sanctions against Russia, hitting its financial and defense sectors. The accusations in the annexation of Crimea and meddling in the Ukrainian conflict added charges in an alleged Moscow’s intervention in presidential elections in the United States.

In response to the new sanctions Vladimir Putin announced the reduction of staff of diplomatic missions of the USA in Russia at 755 persons from 1 September 2017. Of the 1200 people can stay only 455. According to TheWashington Post talking about “serious deterioration” in the emerging conflict, which involved both capital.