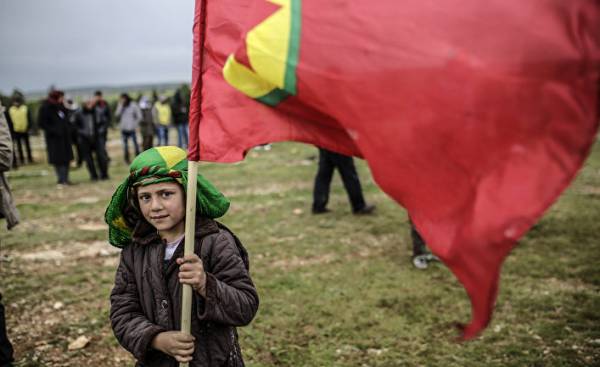 Russian President Putin said clearly: “Weapons of the Party “Democratic Union” (PYD) will not.” He also outlined the framework of relations with the PYD and stressed that they are limited to work contacts. What do you mean by this statement?

A day after the Turkish armed forces has hit the Kurdistan workers ‘ party (PKK) in Iraqi Shemale and terrorists PYD in the Syrian region Karachok, there were some photographs.

Terrorists PYD, which the Turkish armed forces inflicted heavy blows, took refuge in the U.S. military in tel Abyad and the Russian military in ‘ afrīn.

After seeing these pictures of the USA made the decision to send weapons directly PYD. Then all the attention turned to Russia. Is Moscow will also help the PYD with weapons?

Russians compared to Americans share a long-standing relationship with the PKK-PYD, but not as close.

Neither PKK nor PYD Russia doesn’t qualify as a terrorist organization.

The United States called the PKK “a terrorist organization” and its offshoot PYD — no.

After the destruction of the Russian plane violated the Turkish border November 24, 2015, Russia has supplied weapons to the PYD. Later in Moscow was opened PYD.

When Turkey and Russia began the process of normalizing relations after June 2016, Russia has not ceased relations with the PYD, but did not develop them.

The flirting between the Russian and PYD has caused some concern during the Obama administration. America was against he continued and went even further.

With the capture of al-Baba in February of 2017, after the operation “shield of the Euphrates”, the attention turned to Manbij. In this period, the Russian went to local cooperation with PYD in Afrin.

After the operation, the Turkish armed forces in the region Karachok again, there are pictures, which the Russian military was pictured hand-in-hand with terrorists PYD in Afrin.

3 may President Erdogan during his visit in Sochi showed these photographs of the Russian leader Putin, and he said, “I don’t know, I’ll find out.” At the end of last week Putin met with President erdoğan, this time in China. Putin obviously studied the pictures of the terrorists PYD with the Russian military and gave some explanation.

Because when President Erdogan, after leaving China, went to Washington, Putin made a statement about PYD in Beijing.

The Americans are arming PYD, and Putin too will go on this way?

“No, — Putin said. — We won’t supply weapons to the PYD, Ankara should not worry about it.” Russia pursues a clear policy in relation to PYD. It does not preclude the PYD from the Syrian equation, but not so persistent as the United States.

Putin outlined the framework of interaction with the PYD, said that the relations between them are limited to business contacts and in this way will continue.

Putin also said that he discussed the issue of PYD with President Erdogan. And added: “Turkey does not need to worry about this our policy.” In short, the question of PYD USA do not step back. But even if they do, nobody knows how big this step. However, Russia takes a very different stance.

Russia is not burning all the blanket because of one flea. When one side is Turkey, and on the other hand is a terrorist organization, Russia, if you need to make a choice, no hesitation, says “Turkey”.