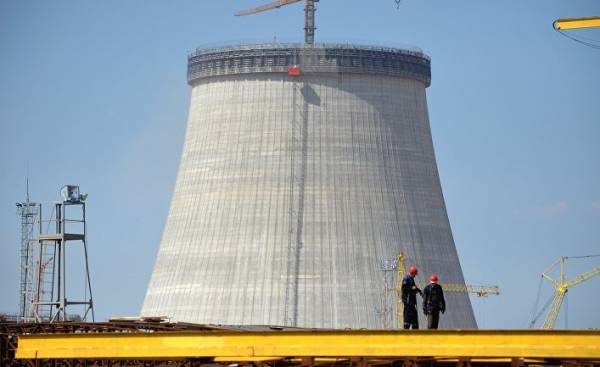 Minister of foreign Affairs of Lithuania Linas Linkevičius angry statements to his Latvian counterpart Edgars Rinkēvičs, the Belarusian portal tut.by that Latvia in the future will not abandon electricity generated at construction in Belarus, the Ostrovets nuclear power plant. Lithuania considers the project of the nuclear power plants as dangerous and believes that her work should be limited. Another disagreement is not going to benefit the unity of the Baltic States, which we are often stressed as a priority of foreign policy.

Linkevičius news Agency BNS said that the main reason due to which Latvia is not planning to block the Belarusian electricity company is trying to lure the Belarusian cargo in the Ventspils port. “A striking example is the port of Klaipeda, which fell Belarusians, Klaipeda and without them it is difficult to imagine the export. But there is also the port of Ventspils, so I assume that they want more cooperation,” presented his version Linkevičius.

Called groundless the statements of the Lithuanian Minister of foreign Affairs adviser mārtiņš Rinkevics Kegeris, but he rejected the idea of buying the electricity that will be produced at the Ostrovets NPP. “Latvia as well as Lithuania, believes that construction of the Ostrovets nuclear power plant must meet the highest safety standards, the Minister repeatedly said Belarus, as well as with the International atomic energy Agency (IAEA). We do not believe that it is possible to adopt special provisions of the law, in order to distinguish produced in an unsafe way electricity and to set the ban to buy it,” said Kegeris.

Damages whether such position of the Latvian foreign Ministry to the unity of the Baltic States? The lack of solidarity from Latvia on serious issues pointed out to the chief editor of the Lithuanian online newspaper the Lithuania Tribune Ruslan Erikovich. “The position of Latvia has upset the society of Lithuania, because the situation of the Ostrovets nuclear power plant threat,” — said the journalist. He noted that the issue of the Ostrovets nuclear power plant the Lithuanians received support from Estonia, Poland, Sweden, and Latvia is not alone. “This is not an internal affair of Latvia, as previously said your Minister of foreign Affairs. It is an international question, because the construction of the Ostrovets NPP is opaque, we hear about the incidents in Lithuania are concerned about the disaster that could affect Lithuania, and Latvia,” — said Irikovich. According to him, Belarus is building nuclear power plants, because the necessary money and access to the networks of the EU, in which the Lithuanians refused. But now it turns out that Latvia opens the possibility to enter Europe potentially produced in Ostrovets power.

“Latvia has always been a difficult partner when you need to negotiate the region’s energy industry. For many years we took to the agreement electromedicine with Sweden. In your country still have problems with the liberalization of the gas market, because it is necessary to “decouple” from the gas of Gazprom. The Baltic States are unified when they act together. We have terminals for liquefied natural gas, and with the help of their capacity in the future we will be able to supply gas to Ukraine if something happens with the supply of Russian natural gas. We should be glad that there was a revolution of liquefied natural gas, and we can take any ship with him. Ostrovets NPP is a political project in the hands of the Kremlin, which aims to split us. We in the Baltics are trying to connect its own energy market, and Belarus wants to buy Latvia cheap electricity,” — said the Deputy of the Lithuanian Seimas, former Ambassador of this country in the US Zygimantas Pavilionis. He stressed that Belarus near Lithuanian border, wants to build a second “Chernobyl”. “Construction is probably underway in the Soviet style. Lukashenko glad that Russian money could provide employment to people and construction companies,” he added.

According to the researcher of Institute of foreign policy of Latvia Maris of Anjana, Lithuania in the context of the Ostrovets nuclear power plant relies on the unity of the Baltic States, and therefore Lithuanians are angry that they have not received solidarity from Latvia. “What is happening is very asolitary step towards Lithuania’s actions against its own interests,” said Andzans.

The Baltics can do without Ostrowiec

The Abolins confused by the current position of the foreign service of Latvia in relation to the Ostrovets nuclear power plant. “The opinion of the Ministry of foreign Affairs diplomatically and pragmatically chosen to maintain good relations with Belarus,” — said the expert.

The opinion of the Minister of foreign Affairs of Lithuania that the basis of the behavior of Latvia’s economic goals, denied Indians. In the field of transportation important the state’s offer of rates, not a political favor. In Lithuania, the tariffs for port services and rail transport remains below the railway network of this country for the Belarusians. Assessment Anjana, Latvia theoretically not receive any economic benefits, if it is more compliant in relations with Belarus.

Latvia is now competing with Lithuania for the possible visit of the President of Belarus Alexander Lukashenko to the EU, but the approach of the two countries to relations with Belarus is different. “Lithuania in relations with Belarus is sharper and does not hesitate to speak hard words, but that doesn’t stop entrepreneurial activity. In the Slavic culture a lot of respect for straight talking, even if they say nasty things,” added Indians.