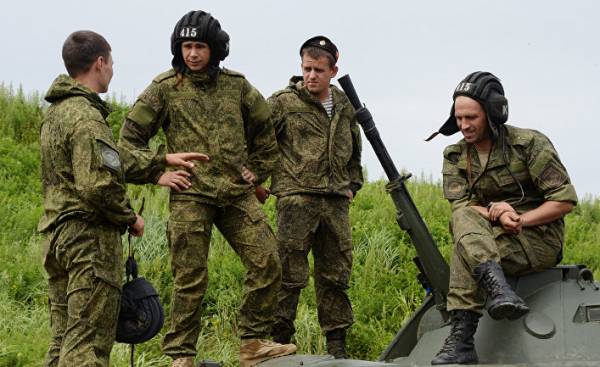 Military exercises “West-2017”, which will be held in September in Russia and Belarus, has already attracted the attention of the Western press. In the last few days some media began to appear panicky messages about the unprecedented number of Russian troops, which will hold exercises on the border with the affected Eastern European countries such as Poland and Lithuania. Others argue that as soon as Russian troops enter Belarus for participation in the exercises, they can stay there, “to give Moscow a more forward base in Europe,” or, to put it not so carefully chosen words of some Ukrainian officials to occupy Belarus as the prelude to the invasion of the Ukraine from the North. Given this level of excitement in connection with military exercises, which remained for another six weeks, it will be useful to analyze what we actually know about upcoming trainings and their prerequisites.

The teachings of the “West” is a regular event, held every four years since 1999. Moreover, it is part of a series of alternating large-scale exercises that provide the basis of the annual cycle of the Russian military exercises. Events alternate between four major Russian operational-strategic offices (Eastern, Caucasian, Central and Western), in accordance with which receive their name. Such large-scale operational events were held in the autumn in the Soviet period. In other words, everyone knew that the exercises will be held in the early autumn of 2017, has at least four years ago. The only thing in question is their scope and precise parameters.

These aspects and still completely unknown. Official Russian sources indicate that in General the number of troops participating in the exercise, will not exceed 13 thousand, while quoted Western officials and analysts about what the exercise will involve 100 thousand Russian military. Previous teachings of the “West” was more ambitious in 2013, they involved about 75 000 military. Partly the discrepancy in the figures may be associated with differences in who should be counted. The largest numbers referred to in Western sources, usually include not only the Russian armed forces, but also the security personnel and civil officials who may be involved in some parts of the exercise. Moreover, the Russian armed forces can undertake other associated with these exercises, it is technically not part of the exercises “West-2017” and therefore will not be included in the official number of troops involved.

What we do know is the fact that the total number of Russian troops on the Belarusian territory should be less than three thousand people. Russian military experts point out that the exercises will focus on the actions of the Russian air force, parts of them are transferred to the air base in Belarus, will also involve the air force division based in Pskov and at least one infantry division from the Russian Western military district. Western sources indicate that the exercise will also participate recently recreated the First guards tank corps, although Russian sources have not confirmed this. Officially, according to Russian Minister of defense, the challenge is in “joint planning, team tactics and joint military formations”. At the same time, Russian officials do not hide that the goal and form of the exercise is partly motivated by the concern of Moscow in connection with the increased military presence of NATO in Eastern Europe and the fear that Western agents want to provoke regime change in Russia a friendly state, or even in Russia itself. Therefore, in the exercise “Zapad-2017” will focus on the coordination of Russian and Belarusian special forces and in coordination with forces from other agencies, aimed at resolving internal conflicts.

To sum up, the exercises “West-2017” are the latest iteration of the ongoing regular series of exercises. Officially they are for the protection of Russia (and the friendly countries, for example Belarus) from attack by an unnamed hostile powers. In the past, these, at first glance, a defense of the doctrine included elements of attacking manoeuvres, for example, amphibious landing in the face of opposition of the enemy. However, the likelihood that these exercises are used as a cover for a more ambitious evil goal, whether it is attack on Ukraine or Lithuania or invisible occupation of Belarus, is practically zero. In fact, some analysts in Moscow believe that the exercises this year are unusually modest, in order to shorten the reaction in neighboring States-members of NATO. The real purpose of these teachings in General and of the exercises “West-2017” in particular remained mostly unchanged in the last 10-15 years. Conducting these large-scale exercises, Russia has pursued both political and military purposes. From a military point of view Russia is trying to emphasize their ability to conduct large-scale joint operations, with numerous branches of its armed forces and requiring the activation of the logistics network, including transfer of forces from one part of the country to another. “West-2017” and other similar exercises are also intended for the practice of military cooperation between Russia and Belarus, as Belarus is the most capable military ally of Russia, performing the function of a critical buffer zone between it and the countries-members of NATO. Moreover, a possible NATO intervention in Belarus is regarded as one of the most likely causes for large-scale military confrontation between Russia and the West.

From a political point of view, the aim of the exercises “West-2017” is to deter the West, stressing Russia’s readiness to counter any aggressive actions by NATO or individual member countries of the Alliance. Despite Western assumptions about Russia’s aggression, she continues to feel relatively weak in comparison with the United States and its allies. As a result, she is keen to stress the abilities on self-defence as in the case of direct attacks and attempts at regime change. To appear in the Western press in recent times stories emphasized that the potential scope of the exercise plays into the hands of Russia in achieving this goal.

While the details of the exercise no doubt will be announced in the near future, I am sure that “the West-2017” will be the same as the previous strategic operational exercises with Russia. During one week in September, Russian and Western media will breathlessly praising the might of the Russian military forces. And then the Russian military will return to their bases on their own territory. Experts from both sides will begin to publish detailed critiques of what actually demonstrated these exercises, what is strength and weakness of the Russian military forces, although this is in the mass, will be ignored by the Western media, who are already passionate about some new story.