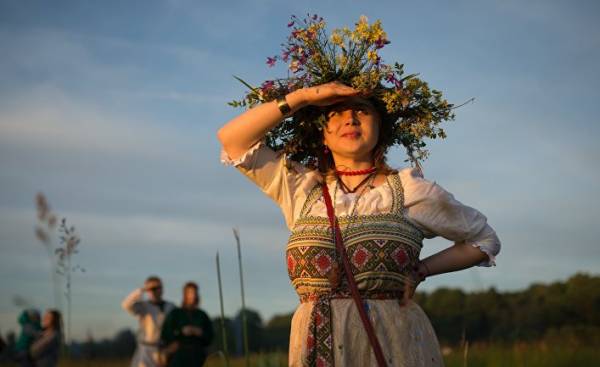 A large-scale campaign against the European Union very well thought out and developed from the point of view of propaganda. Conservatives European Union is presented as the product of the left, and located the liberals — like the ossified bureaucratic-authoritarian model. In General, to each his own. And, of course, actively played the national card. For example, in the us, people who have still not really had the time to understand themselves and to gain self-confidence, it works the same as any whose inferiority complex hurt. We have not yet learned to be critical and equal partners compensate our indignant complaints or resentful sob, like that jerk from the old, old movie “Button war”: “if I knew in advance I would not go here”.

Being in that state, no-no and will be shown an involuntary thought that impossible, but attractive, just because racist: we should stick with the Slavs. And all would do well to revive the spirit of Slavic reciprocity. The West we have always been disappointed and even betrayed. Moreover, its values are destroyed. So let’s see the blood, close to us historically: young, fresh, Slavic.

Of course, this is complete nonsense, but it seems to someone attractive idea.

Once during my childhood and early youth, there existed the myth of Slavic reciprocity, which was part of the Bolshevik-Soviet propaganda. The Kremlin we supposedly have always done good — only the tsarist government a little spoiled the picture, but progressive Russian people, the workers, peasants and working intelligentsia has always been for the Czechs a guarantee of great Slavic future. So let us rely on them, as they said, and our future will always be bright. The spirit of Hussites is alive and develops in the descendants of the glorious Russian heroes. The West is rotten to threaten us. If it were not for mother Moscow, the sharks on wall Street long ago would have eaten us, but hawks in the Pentagon — peck. Not to mention German German revenge-seekers — the age-old Slavic enemy. And from all these enemies of the Czech lands will protect us racial reciprocity at the head with the “verslavend”, that is Russian.

I was lucky that I was surrounded by intelligent people, so I soon shared the opinion of one of our greatest in the full sense of the word citizens of Karel Havlicek Borowski: “it is With national pride I will say briefly: “I am Czech”, but I would never say: “I am Slav””.

Beautifully, clearly and accurately, just as Havlicek was able to formulate his arguments. Having been in Russia and learned the mentality and aspirations of this Eastern power, he realized that the so-called pan — Slavism is only a tool that she uses to be the leader of the mass of the Slavic peoples. In its plans, the Kremlin has prepared for them a role, in military terms, cannon fodder. In economic terms, they were prepared for slaughter, and the political, they had to be a fifth column in specific States.

The Russian plans were never modest. Russia has always been a backward country, but militarily she was capable of anything, was ready to sacrifice every last man, woman or child, protecting themselves and defending their Imperial interests. In addition, Russia has always been a distinct complex of Savior, the belief that Russia exists for the salvation of the world. Hence the absurd views that live there today: the triumph of justice would be to turn Moscow into the Third Rome. Or fourth, or fifth — depending on whether we distinguish the prediction of the monk Philotheus of Pskov in the 16th century, dreams of the Owner of Stalin and theories that are developing in the circles of philosophers and theologians around Putin, or consider it all one of the historically unfounded and insane idea. By the way, the obsession with the desire to play this role was one of the reasons for the first Russian occupation and annexation of the Crimea by Catherine the great.

Russia has always raved and continues to rave the idea that created for the role of leader. Quality it makes up for shortcomings in the number, brutality, resourcefulness and undeniable sacrifice of its citizens when it is required of them. And there is no doubt that this sacrifice deserves more uplifting and simply more humane purposes.

Generally from a historical point of view, the so-called pan-Slavic reciprocity would be comical, if not often leads to tragedy. The relations of the Slavs with one another is often brutal. The common racial blood repeatedly abused in order for the Slavs to each other it drowned.

Recall, for example, Russian-Ukrainian-Polish “copper”. If there are Slavs and there was something mutual and shared, only hatred and militant anti-Semitism. You can still remember Taras Bulba. In the struggle with the Slavs Slavs on the faith, too often remembered. And, for example, “warm” relations between Serbs and Croats during the Second world war also had its reason and justification. And these “vzaimnosti” the Slavs can find a lot of. The fact that the Slavs from the East with passion labeled in our Slavic national Museum, compared to some Katyn is just a breeze.

Appeals to some kind of Slavic brotherhood that sound yet softly and rarely and koordiniruyutsya Russia, this is either idiocy or pure cheating. Who defends such plans, that, in the words of a classic, makes it “either out of stupidity or for other people’s money”. Paralyze relations with the West and join Moscow, is not such a fantastic idea as it seems. And it may not happen today or tomorrow. It does not need Putin’s tanks. Policies are cheaper for one screw “Dry”. And among the Czech political elite, it seems, many of those who would be happy to fly in a Russian squadron, especially if it is something else “perepalo” material support or power.

To destroy relations with the EU, to initiate a referendum and to further influence the already deformed public opinion about the West in General and Brussels in particular to promote is not difficult. Especially if its authors — Russian experts in this area (by the way, apparently, this campaign is already underway). In “fooling” they are literally the masters, and for a long time. Consider this: 18 years ago we just got rid of the Kremlin’s totalitarian and total manipulation, and Moscow again took up the old and lead a “hybrid war”. And again, people to it more listens.

Since I mentioned the Karel Havlicek Borowski as a man of enlightened and reasonable, I want to remember another prophet who is never wrong. We are talking about George Orwell. In 1947, in the journal Tribune, he published his clear vision of a United Europe. He warned of its potential enemies. The most serious and cruel enemy, he is called Russia. The reason is simple: Moscow will not tolerate if there will be something United, which is not subject to its control, which is not koordiniruyutsya her not to pull her boat as the Volga boatmen.

The prophecy of Orwell, as you know, relevant.

If you manage to destroy the European Union, or at least take him away from his Western roots, then we can expect that in the future we Czechs, we’ll have another Union. We will again be under the tutelage of Moscow because of our geographical location and the strange pseudointellectuals, and in fact, unfortunately, mostly of Eastern (spiritual and social) orientation. What a beautiful Slavic Union could be headed by Kremlin-Savior! Don’t know about you, but I’m such a salvation, frankly, don’t want to.