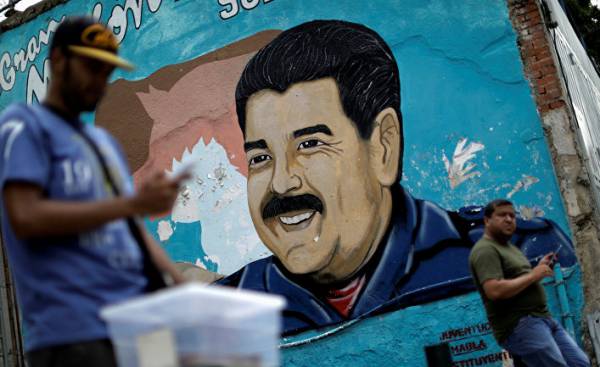 The crisis in Venezuela has become a Central topic on the agenda of the foreign ministries of Latin American countries. This continent, accustomed to bloody dictatorships in the twentieth century, the current century has brought dramatic changes, which in most cases led to democratic forms of government. The chaos that overtook the biggest oil power in the region, threatens to distabizirovat the situation in all of Latin America. The main causes for concern are the increasing flow of refugees from Venezuela and drug trafficking. In recent years the country has become a transit point of all South American drug. This is the first serious crisis facing a new balance of power established as a result of the latest series of elections, which ousted from power the most important allies of chavismo in Argentina and Brazil led to the isolation of the Venezuelan regime, that trust remains exclusively on Cuba.

The leading States of the region continuously exchange information, fearing the situation may get out of control. One of the most pressing issues — immigration. The humanitarian crisis in Venezuela has reached unprecedented levels. The shortage of food and medicines makes life unbearable in a country where inflation rose to astronomical proportions. Exodus cannot be stopped. In 2016 in Colombia came 370 of thousands of Venezuelans, which is 15% more than in the previous year, although it is difficult to estimate how many of them decided to stay in this country and how they got there. The number of asylum seekers also increased dramatically. According to the office of the UN high Commissioner for refugees (UNHCR), most of the petitions received United States (18 300), followed by Brazil (12 960), Peru (4 453), Spain (4 300) and Mexico (1 044).

The constituent Assembly, which began in the days of his job, stripped of office elected in 2015, the Parliament in which the majority belonged to the opposition. Opponents of chavismo stated that it would not recognise the new institution. One Venezuelan passer-by, which a British reporter asked on the street whether his country was a dictatorship, gave a very revealing answer: “Dictators are run, but I’m not sure that we have a government”. A new authority does not recognize and the international community, but the government of Maduro, it seems, is not going to back down.

“This is a permanent chaos and anarchy,” complains Joaquin Villalobos (Joaquín Villalobos) who is trying to draw attention to one of the most painful topic for some Latin American governments, in particular, for Mexico — drug-trafficking. “In this chaos, criminal gangs are becoming a tremendous force,” said the former Salvadoran guerrillas, and now a consultant on conflict resolution. Venezuela has started to turn into a transit point of drugs from Colombia in the beginning of this century, finally a foothold in this status a decade ago, when the Colombian national liberation Army (ELN) and the fighters of the Northern bloc of right-wing United self-defense forces of Colombia and took positions on both sides of the border with the connivance of the Venezuelan authorities, to recall the Vice-President Tarek al-Aissami — accused the United States in connection with the drug cartels.

The lack of control in this area almost totally. Coca plantations in Colombia in the past year reached the maximum size ever: 188 thousand hectares, which is 18% higher than a year earlier. Increasingly large quantities of cocaine easily enter the territory of Venezuela. “There is no coordination between the Venezuelan and Colombian soldiers, they don’t trust each other, a feeling that talk different languages,” explains Colombian analyst Ariel ávila (Ávila Ariel). In his opinion, a significant part of product goes to Europe, and 35-40% in Central America, and then in the United States. It is of the utmost concern of the Mexican government, which fears even more pressure from the Northern neighbor to stop drug trafficking across the Mexican border. Analysts and diplomatic sources also fear that the rampant drug trafficking will lead to a breach of contract the end of 1980-ies about the fact that Cuba will not open a corridor for the Mexican and Colombian cartels.

Meanwhile, the shadow of Cuba, everywhere in Venezuela. The island has become the main ally of Caracas after the coming to power of Hugo chávez (Hugo Chávez). Venezuela has become the economic mainstay of the Castro regime in exchange for thousands of Cuban advisers — political, administrative, military. The fall of the government of Maduro will be a serious blow to Cuba, which currently receives daily about 50 thousand barrels of Venezuelan oil. While no one can precisely calculate the steps of the Cuban regime in Venezuela. “Repressive technology is clearly borrowed from Cuba, which can transmit chavismo experience of existence in the face of international isolation, seeking to weaken the opposition slogans that soon the situation will change for the better,” says Cuban historian Rafael Rojas, which calls for caution relates to the strengthening of Cuban-Venezuelan relations that emerged with the end of last year. This tendency is strengthened due to the stalled reforms on the island after the visit of Barack Obama and the arrival of Donald trump at the White house. “A marked change of rhetoric, and now the idea is that Maduro want to destroy, then to take over Cuba. If earlier the Cubans tried to lure the carrot, the whip leaving for Venezuela, both countries now just waiting for the stick,” — said Rojas.

The President of Colombia, Juan Manuel Santos, met recently with Raul Castro to discuss the Venezuelan crisis. Little was known about their conversation. But Santos became the first President who has declared that does not recognise results of “national” referendum. Time is playing against the population. “We are not even thinking about what will happen tomorrow. What is happening now, and it’s too scary. They say that could start a civil war, but the number of deaths now is huge. Each represents the situation differently, but there is no denying that it is critical, now we are looking for a consensus to act,” says a source close to the Argentine President Mauricio Macri. His government opted for a direct confrontation with Maduro because there is hope for an internal solution to the problem. The Vatican, which does not recognize the Constituent Assembly and calls upon the government of Maduro to respect human rights, supports countries that are willing to go further. 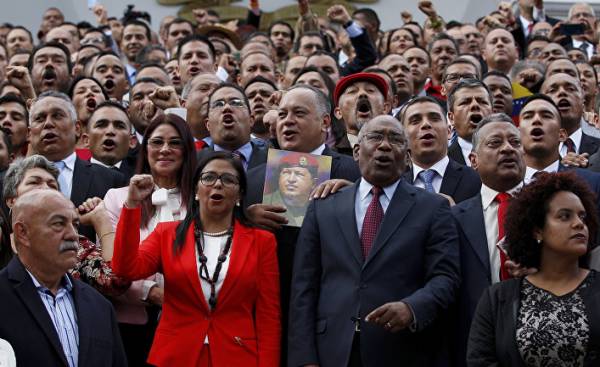 The crisis clearly shows new balance of power emerging in recent years, especially in South America. Care Cristina fernández de Kirchner in Argentina and Dilma Rousseff in Brazil was deprived of Nicolas Maduro the support of two crucial allies. The Ecuador of Rafael Correa, also moved away. Makri has intensified criticism of the government and Maduro together with Brazil insisting on the exclusion of Venezuela from MERCOSUR. The events of recent days has weakened the resistance of Uruguay, where the authorities left coalition “Broad front”. The Argentine President, in the midst of the campaign before the midterm elections, is using the crisis against leading in the polls Cristina Kirchner. The same thing happens in Mexico, where the government of Enrique peña Nieto, formed the ruling Institutional revolutionary party, behaves in the same way relative to the main current of left-wing forces candidate Andres Manuel Lopez Obrador (López Obrador, Andrés Manuel). The current Mexican administration, forgetting about the traditional diplomatic prudence, was strongly opposed to the government of Maduro.

But throughout this campaign lies the real concern for the consequences of regional instability. Strategists who are trying to develop a regional agreement to drive Maduro in the corner think that, despite the resistance of some countries, such as Bolivia, which still supports it, there was a common understanding of the gravity of the crisis threatening all States in the region, but because they cannot stand still. No one can say that nothing terrible happens. Even human rights organizations, close to the left, among which Argentina CELS, openly condemn the attack Venezuelan police against the population.

Mode Maduro every day is losing allies. More and more countries accept the need for sanctions that will force Caracas to find a way out. Some, such as Peru, thinking about the cessation of diplomatic relations. The President of this country, Pedro Pablo Kuczynski, has become a model for many in the region, leading the opposition against Maduro and openly attacking the Venezuelan government, including in international forums (last year’s Ibero-American summit in the Colombian city of Cartagena de Indias). Now he decided to gather in Lima of Ministers of foreign Affairs of the countries of the region, of which 14 have already confirmed their presence, to search for joint solutions. This meeting will be the attempt of several States to form their own pressure group because of the inaction of the Organization of American States, which blocked the remaining allies of Venezuela, Cuba, Bolivia, Nicaragua and a number of small Caribbean countries dependent on Venezuelan oil. A common concern in the region, the fate of Venezuela, a key Latin American country, forcing everyone to mobilize. This time it seems serious.