A week later after the US President Donald trump has signed the decree about extreme selection of migrants”, the film continues. He, recall, provides for a 90-day ban on the entry of residents of the Sudan, Yemen, Libya, Somalia, Iraq, Iran and Syria are stopping Syrian refugees and suspension of 120 days of receiving refugees from other countries.

MUTINY ON THE SHIP. After a series of protests around the world Saturday in Federal court in Seattle has suspended the controversial order. Judge James Robart explained, the decree will not be binding until, until will not be considered a claim for cancellation brought by the Prosecutor of the state of Washington. This decision was expected: the entire week in the United States did not cease protests against “anti-Muslim decisions of the trump”, which was supported by the political leaders of the Arab countries, Europe and Canada. In addition, prosecutors in 16 States are gathered to decide how to lift the ban of the White house. Donald trump reacted quickly: I called Robart “so called judge” and his decision “ridiculous”. However, despite the criticism of the President, the American authorities immediately began to restore cancelled because of the new decree visa (canceled about 100 thousand), and the airline began to sell tickets to residents of the “forbidden” countries.

WALL AND VIOLA. Meanwhile, the Minister of internal security of the USA John Kelly promised, claimed the wall with Mexico will be built in two years. Construction will begin in the coming months, the first fragments of the wall will appear in the most problematic areas, then connect them. But the new assignment continue to fall trump: billionaire Vincent viola, nominated for the post of Secretary of the army, refused to take, they say, will not be able to combine work in the Ministry with business.

In London hosted a large-scale protest against the special relationship trump and Britain. Petition to ban him from meeting with the Queen gained nearly 2 million signatures. The marchers carried banners “No to racism, no Trump”, “He’s lying to you” and chanted “All walls must disappear.” 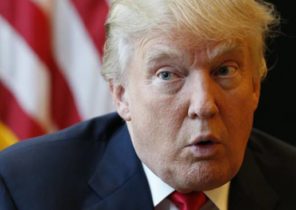