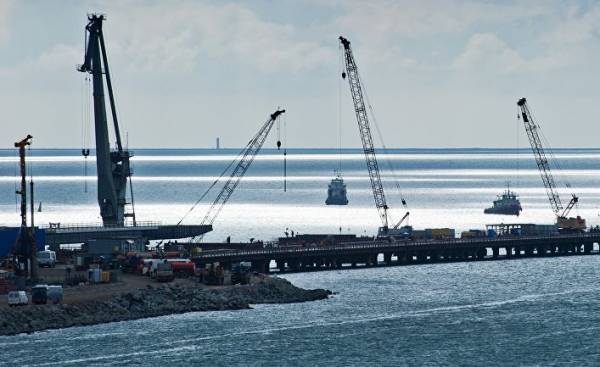 Kerch bridge can be a valve which regulates the pressure on Kiev by limiting the navigation in the Ukrainian ports of the Azov sea. When this bridge is threatened with destruction, according to some Russian experts.

Russia moves to the next phase of construction of the Kerch bridge over the Strait between the Black sea and the Azov sea — set on a full-time support his arches. Starting from August 3, prohibited the navigation through the Kerch Strait, namely 3-6, 8-10, 14-21, August 28-31, and September 1-4, only 23 days. After the installation of the arches under the bridge will be able to pass the vessel with reduced dimensions. Only because of these time constraints in Ukrainian ports Mariupol, Berdyansk and Genichesk you can lose half a billion hryvnia. In addition, there is risk of losing full access to these ports on the Azov sea.

According to many experts, one of the main mistakes of Ukraine in the fact that instead of finding legal and political solutions to counter the construction of the bridge Kerch Kiev from the very beginning, immersed in natural media campaign to discredit the very possibility of the construction of the bridge. As a consequence of missed time to search for more adequate ways of influencing the situation.

According to the draft, the height of the Kerch bridge in place of the passage of vessels must be 35 metres. This means that in the Ukrainian ports of the Azov sea will be able to get ships with a maximum height of 33 metres. The designers of the bridge also claim that the depth of the channel beneath it reaches 9 meters. This will allow passage of vessels with a draught of 8 meters. According to online maps of the movement of ships, “Marine Traffic”, for example, on 31 July in the port of Mariupol were seven cargo ships. The largest of them draught — 8 meters. That is, most of the ships bound for Ukrainian ports of the Azov sea, will be able to pass under the Kerch bridge. In particular, ships of “Federal” have a relatively small surface dimensions and is capable of carrying substantial loads.

“No consequences for the navigation of the Kerch bridge theoretically and technologically do not have to create. If there are restrictions — this is politics, not technology,” — said the expert of shipping, chief editor of BlackSeaNews Andrey Klimenko.

However, Mariupol sea trading port from time to time accepts ships of type “Panamax”, which have a draught of 14 meters. So they can get in and out of the port of Mariupol and does not exceed the depth of precipitation, do not download them completely and they become higher. Therefore, after the completion of the bridge actually block the movement of ships of type “Panamax” because they surface with a height of at least 5-10 meters greater than the height of the Kerch bridge in place of passing ships. According to many experts, it may hinder the development of Ukrainian ports of the Azov sea and the international trade with Ukraine.

The Russian unilateral control over the entrance to the Kerch-Yenikalsky channel allows Moscow at any time to block access of ships in Ukrainian ports in the sea of Azov. The bridge will be a convenient infrastructure, primarily for the trade blockade of Ukraine when it is necessary for Moscow. Under any technical reasons, for example, maintenance or fortification work, or under the pretext of military or anti-terrorist exercises in the Kerch Strait can be restrict shipping. The increased presence of the Russian Navy in the Kerch bridge can interfere with Maritime Commerce.

International carriers are trying to avoid militarized areas and places of potential conflict. Kerch bridge could become such an valve which will regulate the Russian leadership. Limiting the export opportunities of Ukraine, Moscow may put pressure on Kiev, claiming, for example, water and electricity supplies to the occupied territory of Crimea from mainland Ukraine in exchange for the free movement of ships in Ukrainian ports of the Azov sea, experts suggest.

“Rinat Akhmetov controls the management of two of Azov ports (meaning ports in Mariupol and Berdyansk). These ports connect the industrial Donbas, where the majority of enterprises, from the sea. Therefore, by restricting Russia is able to motivate Akhmetov on a specific economic support, “the self-proclaimed republics”, — said the expert of the International centre for policy studies, Paul Boledovich.

The threat of self-destruction?

In the days of the Soviet Union considered the possibility of building a bridge over the Kerch Strait, but due to difficult geological situation — in particular, the danger of earthquakes from this idea was abandoned. Now construction technology is much more reliable, but lacked proper assessment and calculation of risks. I also think some Russian experts.

“There’s mud volcanism, six aquifers by karst (unreliable for the construction of a geological formation that may fail). Where, just like now explain, we will beat the pile? There is nothing can not be beat: it’s the sea, plus 80 meters of bottom sediments,” — says senior researcher of the Institute of water problems, Russian Academy of Sciences Yuri Medovar.

He admits to erect a bridge can be, but the question remains how long he will stand and will withstand loads from road and rail transport, as well as weather conditions with storms and seismic activity. Russian expert doubts in adherence of technology of construction and gives examples of much smaller bridges in Russia, which collapsed due to negligent information in recent years.

In particular, the bridge in Borisoglebsk Voronezh region collapsed in January 2013, killing several people. And in may of last year in Rostov again collapsed bridge in the same place a year after the first collapse.

The Kerch-Yenikalsky channel in the Kerch Strait links the Black and Azov seas. Movement of vessels through the navigation channel and in the waters of the Azov sea is governed by the International Convention on the law of the sea of 1982.

Kiev is convinced that Moscow has violated this and other international agreements. Unilateral actions concerning the construction of the bridge Kerch violate international law and sovereign rights and jurisdiction of Ukraine over its internal waters, territorial sea, exclusive economic zone and continental shelf in the Black and Azov seas, according to the Ministry of foreign Affairs of Ukraine. According to experts, the situation in the Kerch bridge creates a precedent which in the future can refer to other countries and violate international law and build what they want unilaterally.

“The case of the specific limitation of the navigation is more compact and action can be taken promptly. Therefore, this case should proceed immediately, relying on violations of the Russian Federation of the norms of international law of the sea. However, Ukraine should prepare for more large-scale claims on the subject of the illegality of the construction of the bridge in General, which is much longer and more complicated process. And given the lack of recognition by the international community to the annexation of Crimea, there is a high likelihood of success for Ukraine’s verdicts,” said Paul Boledovich.

According to him, such decision will not affect the operation of the Kerch bridge, but these decisions on the illegality of the construction you can rely on in the future, giving concrete action against Russia in case of restriction or traffic vessels in the Ukrainian ports in Azov.

Deputy Minister of infrastructure of Ukraine Yuriy Lavrenyuk is already stated in early August that he was preparing a lawsuit and damages are considered uncollected funds trading Mariupol and Berdyansk ports.

There is still no thorough environmental impact assessments carried out directly on the construction site of the bridge. They did neither the Russians prior to construction or Ukrainians. Therefore, the existing scenarios of development of ecological situation in the Kerch Strait are rather conditional.

However, the ecologists there is no doubt that the giant infrastructure project will disrupt the existing ecosystem, in particular, natural water exchange between the Azov and Black seas, what will harm the flora and fauna. While no General consensus that the construction and operation of the Kerch bridge will turn the sea of Azov on the Black sea Bay. The biggest concern now is what will happen in the winter. The sea of Azov freezes and cargo sudoplast is possible only after routing icebreaker. The bridge supports will hold a large array of ice. Its accumulation can block the passage of ships under the bridge.

Earlier, the Minister of justice of Ukraine Pavel Petrenko suggested that international companies will join the construction of the Kerch bridge into the occupied Russian Crimea fall into the sanctions list.

The official said that prospects in the construction of the Kerch bridge, in fact.

“Russia can’t build and smaller-scale infrastructure. Know that after the Olympics in Sochi have already begun to crumble the entire stadium. Therefore, I believe, the best tool in this situation — sanctions against companies, which have been so short-sighted to join this project”, — he concluded.