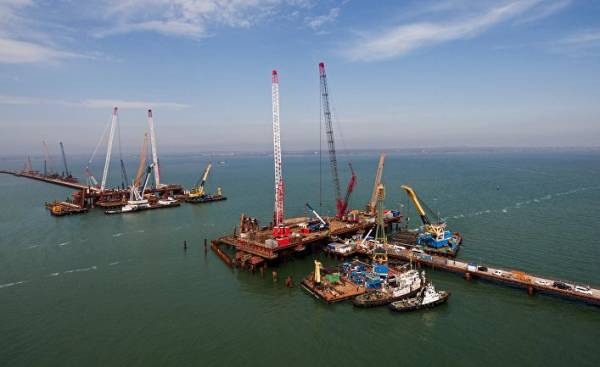 Ukraine initiates new trial with Russia on construction of Kerch bridge to occupied Crimea. According to the Ministry of infrastructure of Ukraine, the construction of this facility can lead to huge financial losses for the commercial ports of Mariupol and Berdyansk and, as a consequence, undermines the national security of the country. Answer whether Russia in its illegal economic activities at sea, to understand “Apostrophe”.

Ports removed from the game

The Saga of building of a ferry from Russia to the annexed Crimea stretches from 2014, when after the capture of the Peninsula Vladimir Putin has set his government the goal of connecting the Taman and the Kerch Peninsula a full-fledged transport ferry. The project was estimated at $ 4 billion, then this amount is constantly increasing, and the contracts for contract works were distributed by the Kremlin without competition. The idea of Moscow, after the implementation of this project the occupied Crimea will become a tourist Mecca for Russians, and the economy of the Peninsula will revive.

While the Taurus remains annexed to Russia, of course, is not interested in Ukrainian position in relation to its “project of the century”, but it has not yet been built Kerch bridge can create significant problems for our economy. The fact is that from August 1, Russia imposed restrictions on the passage of the Kerch-Yenikalsky channel for the period of the construction of the arches of the bridge. This process can take up to two months, and it was this shipping canal connects the Black sea with the sea of Azov, which operates two commercial port of Ukraine — Mariupol and Berdyansk.

“These days will fall out of the navigation in the Azov sea, says “Apostrophe” expert of the Center for transport strategies Andrei Isayev. — This is a very serious loss to the ports. On the other hand, the captains can take into account these breaks in the work, to go to the ports, dive and wait for the output, but it is also not an option, because in this case udorozhaet freight that will lead to financial losses for shippers”.

So, applies to all ships that exceed 160 feet in length, 31 meters in width and have more than 33 meters of the surface envelope with a draught of over 8 metres.

In the Ministry of Infrastructure noted that the Russian restrictions are not feasible, since trading in our ports of call vessel with a draft of 9.6 up to 14 meters. The source of “Apostrophe” in Berdyansk commercial sea port said that they have such ships from a third to a quarter of the total number of ship calls.

“And the charterers, that is, those who order from the court of shipowners, in this situation no one knows how to do that. Or they can Charter vessels of smaller size and, accordingly, to export the same amount of goods they will need more ships and that the port even win. Or they can refuse to Charter vessels in this direction due to the fact that for them it will be more expensive because each vessel, each mooring, the services of the tugs is all additional costs”, — said the interlocutor of “Apostrophes”.

In turn, the Head of the press center of Mariupol port George Romanenko adds “Apostrophe” that Russian restrictions have created significant problems for business.

“The introduction of the Parking restrictions for vessels during the passage through the Kerch Strait have created some difficulties for all participants in the shipping market, including for the port of Mariupol, says Romanenko. — The fact that the bulk of the ships that docked at our port, was battle fleet. These ships were in “time-Charter” (a contract between shipowner and charterer, — “Apostrophe”) directly from the owners. That is, they pick up goods in Mariupol, deliver it to the port of destination and back again to us for the next ship party. With the introduction of the Parking restrictions for vessels during the passage of the Kerch Strait charterers immediately faced with two problems. First, they need to close the existing treaties of the Charter in those vessels that no longer fit the specified dimensions. And secondly, you need to quickly find an adequate replacement of such courts, to take already contracted shipments. It should be noted that freight rates on battle fleet a few below market. And for the so-called “tramp” ships (plying irregularly — “Apostrophe”), which are long-term contracts for transportation and is able to take a passing cargo from Mariupol, you have to shell out more money.”

According to the source of our publication in Berdyansk port, shippers are already looking for an alternative to Berdyansk and Mariupol enterprises.

“Now everyone is in a situation of uncertainty created by the actions of the Russian government. How it will develop in the future and will decrease the number of ship calls, now hard to say. Because the part of shippers have redirected their cargoes at this period in the black sea basin, and will they return back — is the subject of negotiations, because in a situation of uncertainty, the business for a long time can not act. They will take the goods — we’ll be working with will take, hence we won’t work. We do not have a complete picture of how much the same Akhmetov manages to carry a ton of metal to Nikolaev and how it will affect its competitiveness in the international market. Two ports are now busy looking for other shippers since July” — summed up the interlocutor of the edition.

In Mariupol port have no doubt that the increase in freight rates and the increase of the transport arm to the Black sea ports in Odessa and Mykolaiv will definitely increase the final cost of production of the enterprises of the region.

“This is a blow to its competitiveness in foreign markets. The less the owners will be selling their products for export, the less it will transship at the port of Mariupol. And total losses from the loss of a significant part of exports and the potential stoppage of several large enterprises to the economy of Mariupol, Donbass and Ukraine in General are impossible to predict”, — concluded George Romanenko.

In Berdyansk port note that the government learned about the situation yesterday. “About what was happening was known in June, but the response was kind of sluggish, except for one meeting in the Ministry”, — said the interlocutor of “Apostrophes”.

In the Ministry of Infrastructure confirmed that now together solve this issue with the foreign Ministry and the national security Council. “This is a global, political and complex issue, but we will solve, — said the Deputy Minister Yuriy Lavrenyuk at the meeting with the trade unions of sea and river ports of Ukraine. — The Ministry of justice within existing legal actions against Russia separates the problem of overlapping of the Kerch channel, and restrictions on shipping. Now preparing a lawsuit and are considered losses and shortfalls the Mariupol and Berdyansk ports of trade”.

However, the prospects of this lawsuit, not to mention positive solution for Ukraine, which may not look very long. For example: in September of last year, Ukraine initiated a lawsuit against Russia in connection with the violation of the Russian Federation of the UN Convention on the law of the sea. In may 2017, 9 months later, the arbitration of the United Nations issued a procedural decision on the claim, according to which a debate will run until September 2019.

“Disputes between States do not solve problems quickly. There are no such courts, which could quickly consider such a dispute, so you need to be realistic,” confirms “Apostrophe” lawyer in Maritime law, International legal service, Arthur Nitsevych.

At the same time, the expert noted that despite the long court procedure, Ukraine has a good chance of decision in its favor.

“But this is a question of evidence, how to prove damages and in what amounts. Three years ago we warned that Russia will want to control independently the Kerch Strait and to exercise all the control over the sea of Azov. A similar situation was not only in Ukraine. For example, this topic was Poland on the territory of the Vistula lagoon — where Kaliningrad. In Kaliningrad, a military base, and the shipping in the Polish part of the Gulf after the Second world practically stopped, because the control exercised by Russia”, — concluded the Nitsevych.

But even if the Ukraine a few years later would prove in the courts their case, there is no guarantee that Russia will hasten to comply with the judgment.

“International law is on our side, so the chances of winning are, but it is obvious that the chances of enforcing judgments is very scanty,” added “Apostrophe” Executive Director of the Ukrainian Institute for the future Victor Andrus.

However, the Deputy Director of the Regional branch of the National Institute for strategic studies in the river Alexei izsák says that that is no reason not to put pressure on Russia.

“To pay the bills, Russia will have. The navigable part of the Strait under international law belongs to Ukraine. The legal position is also in favor of Ukraine, so creating the pressure are necessary, even if the court’s decision will be once there will be a bridge”, — concluded the expert.

“Ukraine must concentrate on this direction and purposefully every hour, relatively speaking, to prepare a new claims that Russia has acted exactly as written in the international law of the sea — adds “Apostrophe” Deputy Director of the Center for army, conversion and disarmament Michael Samus. Is a win — win, because according to international Maritime law, all remained at the 2013 level, this Ukrainian territorial waters, and I don’t know what all can argue Russia in the courts of their actions.”