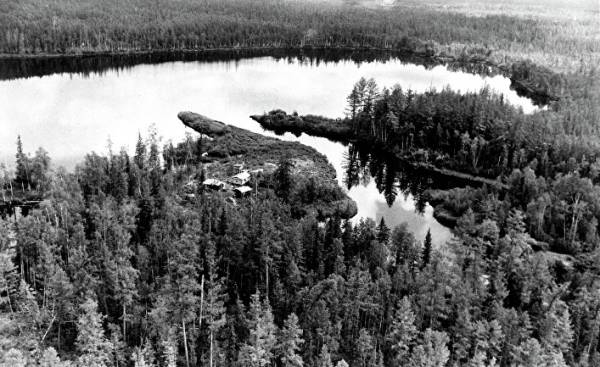 The mystery begins with the designation of the incident, it is clear that it remains rather unclear “accident”. It is still unknown what actually occurred on 30 June 1908 in Siberia, in the Krasnoyarsk region today. If it was a meteorite falling to Earth, the explosion of volcanic gases or even the wreck of an alien spacecraft?

Anyway, that night, at seven o’clock in the morning, there was something incredible, and today show destruction on the territory of about two thousand square kilometers. 60 million trees, as though following an intricate principle, fell in the same direction. But there is no trace of a crater which would be formed in the fall of the meteorite, in this case a giant. Eyewitness accounts in a very sparsely populated area virtually no. Only shamans of the local Evenki talk about the retribution of the fire-breathing iron birds — God Agda — bloody intertribal conflict, the victims of which, in 1908, fell, many clans.

However, the statistics of victims does not exist. Only the stories about the bright glow, the light of which within a few days after that at a distance up to London was at night to read the newspaper. The power of the explosion — some say up to 14 separate explosions — could have the power to reach thousands of bombs dropped on Hiroshima. Only a great remoteness of the area prevented a disaster with hundreds of thousands dead, as it would be if this “incident” took place in St. Petersburg, which is located at the same latitude. In fact, the incident at Tunguska is more affected by deer than people.

No crater could be explained by the fact that a small asteroid or comet about 20 miles above the earth would become a ball of fire. Despite this, scientists continue to look for evidence of a collision, for example, in the lake of unusual shape, Cheko, roughly eight kilometers North from the epicenter, but which, according to Russian studies, should be 280 years. The whole area is of volcanic origin and was formed during the Permian-Triassic period 250 million years ago.

The second most popular theories is based on a geophysical explanation. Under the earth’s crust formed magma and gas, which found an exit to the surface in holes in the rock, and ignited the so-called “Verneshot” (a hypothetical volcanic eruption caused by the breakthrough of underground gases through the crater, named after the French writer Jules Verne). This designation came from the admiration of the geologist Phipps Morgan (Phipps Morgan) Jules Verne and his rocket launch in the novel “From a cannon to the moon.”

The history of Tunguska research is full of passion of scientists. This is reflected already in the first five expeditions conducted in the period from 1927 to 1939 under the direction of Professor Leonid Kulik. Kulik was the first to reach the epicenter of the explosion. It was built in Vanavara the house, and today, every Tunguska researcher is looking for in the first place. Since 1963, there is a community of enthusiasts with the annual congresses and more than 30 held on expeditions. There is even a permanent exhibition of the Tunguska exhibits in the fortress Chapels near Zwickau. Obviously, the Tunguska mystery is on the minds of not only Russian specialists, but also of the Germans. In 1929 even the crew of the airship Graf Zeppelin during his voyage around the world were looking for a crater near the Tunguska river.

We’re talking about the material, from which then arise the sci-Fi history, so it should be mentioned that a significant part of a team of enthusiasts adheres to the version with the explosion of an alien spacecraft. Again and again organized the search for the wreckage of his body. Stanislaw LEM, Strugatsky brothers, and others have revised these assumptions in successful novels. Some attribute this to the Tunguska spacecraft the ability to travel through time. Christian Kracht (Christian Kracht) in the book “I’ll be here in sun and shadow” (2008) this leads to alternative historical timeline in which Lenin was unable to return to Russia, poisoned by the virus after the explosion in Tunguska. Instead, he builds a “Soviet socialist Republic” in Switzerland.

There are some unusual alternative theories: an English astrophysicist Lepas Bondi (Bondi Lapace) suggests a meteorite made of antimatter and, of course, disappeared. It could go on a small “black hole”, which raced through the earth. But there is no sign of exit in the water column on the opposite side, and, as we know, the Earth did not explode into thousands of splinters.

This was done by the villain, who, according to American researchers, was supposed to be Nikola Tesla, who experimented again in 1908 with the new method of energy transfer. Instead, as planned, to cover the North pole, the flow of energy sent from they built this tower Wardencliff on long island, happened to be in the area of Tunguska. Otherwise his research would lead to the creation of the wireless Telegraph and AC. There is a version that in the annual rings for 1908 from fallen trees recorded a significant excess of caesium 137: a nuclear explosion before the nuclear age? Do not grow the trees and plants in the area of the Tunguska unusually fast?

Much funnier than the sound version of powerful destructive detonation of the midges, during which myriads of midges turned to dust. Perhaps the Tunguska simply refers to the events, an explanation of the real cause of which would be far less fun than the many questions that arise during her search.