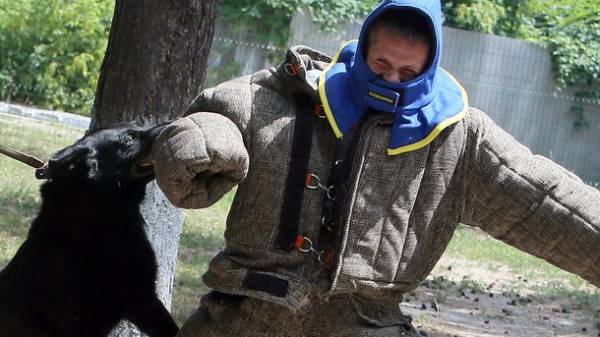 The tense situation in the country makes it even more popular dogs, trained to search for weapons, explosives and to arrest terrorists. The correspondent of “Today,” visited the dog training center of the Metropolitan police, whose tailed Pets often involve the protection of public order in Central Kiev.

Some of the 24 dogs, which are contained in this center, trained solely to apprehend terrorists and other lawbreakers. And hones your skills a service dog the person dog handlers are called “helper”, “wild boar” or “galattica”. His role is usually the dog, sometimes the dog handler’s assistant, dressed in a special protective suit. Such a person at the command “Fetch!” or “Stranger!” being set dog.

Thus, the handlers teach the dog to detain the offender conditional. To experience all the features of the helper, the correspondent of “Today” has experienced the attack dogs.

The first task is to put on a protective suit. Immediately had to get help from a canine — pants weighing 5-6 pounds to pull themselves proved to be awkward. Canine Vitaly Litvin was holding the waistband of the trousers, and I put the left leg first in the pants leg, then right. Vitaly helped to fasten all the belts and filed a sweatshirt. “Her hands hide inside so that the fingers are not peeking,” explains the expert. Buttoned all the straps, he pulled on my head a helmet of cloth, but very hard. “Now, let’s go to the Playground between the trees. When I bring a German shepherd, start to move, wave your arms, run in the opposite direction and out of the holler. When the dog grabs, then try to survive” — instructs the handler. My question is, where will the dog bite, the dog answered: “Usually grabs the hand, but to be 100% sure this is impossible, so you need to wear a helmet — a sudden rush to the head. If you run with a dog can grab and leg, i.e. the part of the body that is in motion,” explained Vitaly, buckling on his helmet.

Training. The wear of dresscostume with the helmet and buckled it took about 5 minutes

When all equipment was on top of me, it turned out that even just to move around in such gear is not so easy and especially fast to get away from the dog. But it’s too late, we must fight.

Go to the site, and Vitaly yells: “Start working!”. German shepherd named Panta, apparently already sensing that now have to detain the defendant, began to bark loudly, prepared to run. I started to run away, and the dog handler commanded the dog, “Stranger!”. On the run, notice how the Pant come up to me in seconds — I didn’t even count to five. 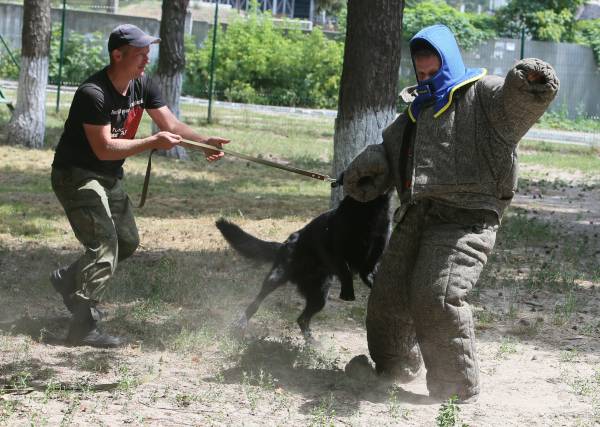 To strengthen the attack. The defendant stopped

The pant has gained such a speed that knocked me down, grabbed the right arm above the elbow, clenched his jaws and, snarling and gasping, tried to break the teeth of the sleeve of the suit. At the same time came to the rescue to us, the dog managed to command the dog to “Give!”, and began to put pressure on her neck at certain points. It took, as I thought, for about a minute when a Punt was wheezing finally loosened the grip, and after a moment let go of my hand. The dog thus held fast, “German”, because he still kept an eye on me and at any moment was ready to continue the detention. 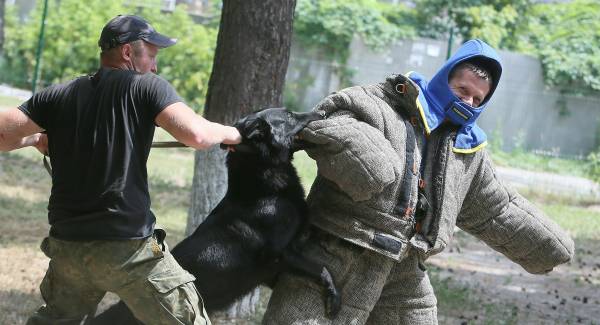 “Break!”. The dog pulled from the helper

A moment later I felt the muscle on the hand that grabbed the Pant begins to burn. However, the media excitement has not disappeared. That Pant is so easily knocked me down, struck me as unfortunate, and, together with the dog we decided to repeat the attack. This time, he held the Pant by the collar. And I tried to attack the cynologist with a dog. The pant reacted instantly — grabbed now for the left hand, which I took a swing at Vitali. And again, the shepherd began vigorously trying to tear the teeth of the sleeve. It lasted about a minute, and then Vitali again ordered: “Give!”, and hit the dog in the throat she gradually loosened the grip and let go of his hand. This time I survived, “German” is not knocked me to the ground! “Well, how the adrenaline felt?” — interested dog handlers. 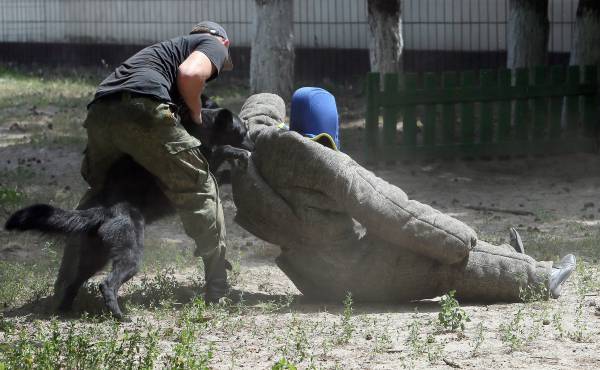 Knocked to the ground. And continues to bite

Hard with something to compare, but I can say that the battle with the beast definitely aroused more emotion than, for example, a first descent in a half-kilometer shaft. After the report I found out that the jaws of the dog are compressed with a pressure of 18 atmospheres (comparable to pressures of tens of kilograms per square centimeter). And when I took off my protective suit, I saw that the left sleeve of the shirt is still torn. But the adrenaline was really worth it. 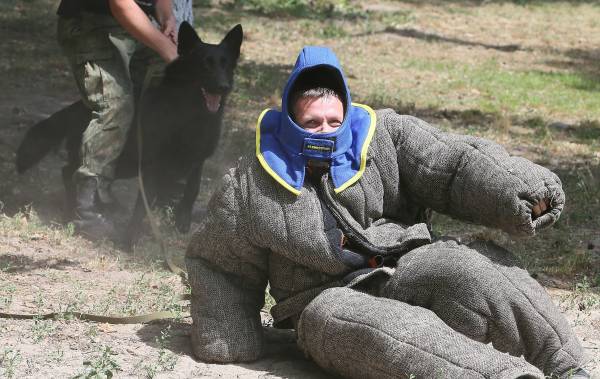 ITS “KITCHEN”: HOST, NOT THE TARGET

“Now, see, the hands have bruises and scratches. It’s all teeth marks. Even the thickness of dresscostume does not help to avoid this,” says the handler Vitaly Litvin, showing the bruises already coming down on both hands. 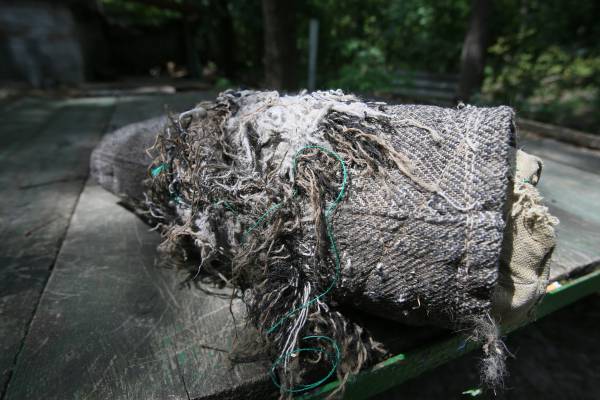 In physique he is a dense guy, but said that the special criteria for the work involved in no. On account of Vitaly, despite the fact that he is the younger inspector-the cynologist, more than a hundred seasoned attack dogs for a year and a half. When we arrived, Vitali just fought off the Belgian shepherd dog (Malinois) Jack. Being a small dog, Jack managed to knock Vitali out the legs in seconds. The person involved is not a separate profession, it is one of the areas in the canine, roughly speaking, the first step on the way to the profession of a cynologist. Without this in any way, — said Vitaly. After “fighting” to better understand the dog, know its features and generally become more enlightened in matters of animal psychology. For example, the Pant that you are being attacked, grabs the defendants almost always in hand and never in the head. Thus, according to Vitaly, it is impossible to be a decoy for your dog.

“It is unacceptable that a dog attacked someone you should listen to — it knocks the dogs off”. 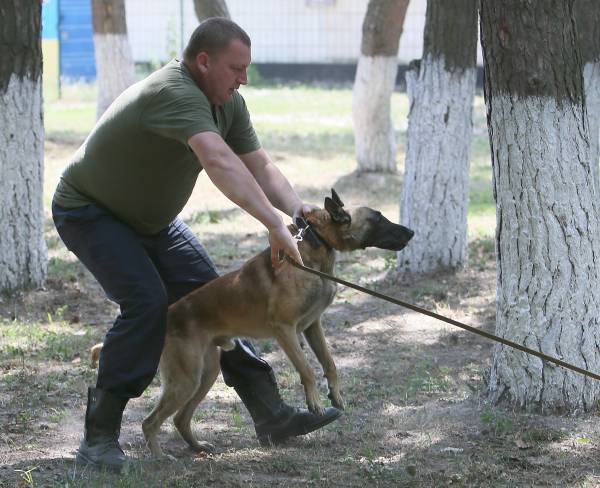 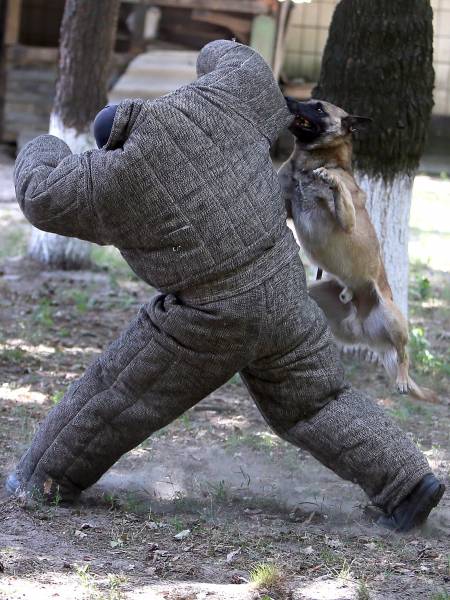 In the work. Hangs on the victim’s arm 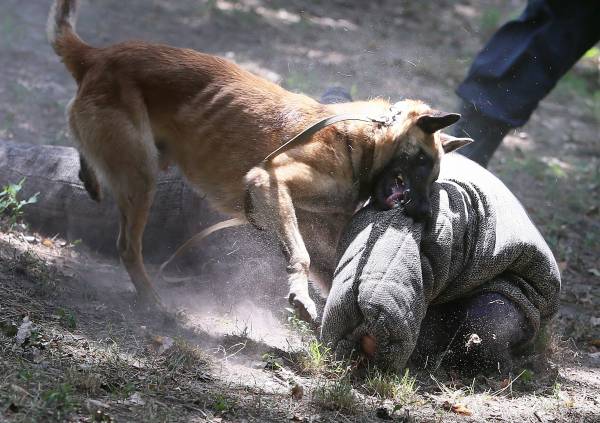 The climax. Knocks down in seconds

For their hard and dangerous the work the handlers, dresselhouse dogs receive a salary from 7 thousand to 9 thousand UAH. Each of the handlers with whom we talked, say that even acting as a “wild boar”, being considered as enemies to the dogs, still love them very much. “You have to love a job or success in training not to be seen,” says another canine, often performing the role of helper, Maxim Kireev, and illustrates the shield in the form of a sleeve — device all chewed and it looks like there are no survivor square centimeter. “But these achievements are very difficult,” — concludes the defendant.

Handlers the defendants explain that their work is important because it gives you the opportunity to grow the dog’s confidence in a victory over the detained person. However, in the history of cynology there are exceptions. “A lot depends on the person involved. Can happen is if he stands still, the dog can run up to you, wag my tail and do not attack. So the screams in the time of training is the imitation of sounds characteristic of attack,” experts say. 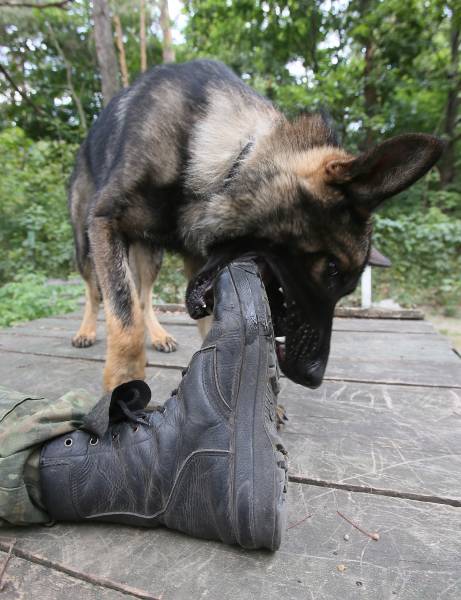 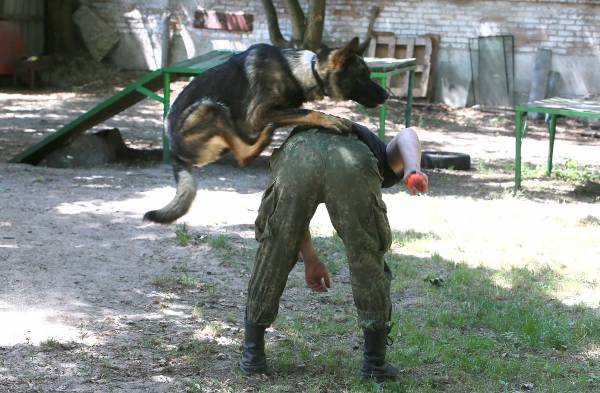 All dogs that natravlyayut people-“belch”, United by one specialization — counter-terrorism. That is, they are trained to apprehend criminals, including armed. At the same time, these dogs are unsuitable for the search for disappeared people or explosives. The specialty as a puppy handlers take into account the working qualities of the dog. For example, if the puppy is aggressive, then this dog is more suited for anti-terrorist work. More calm by nature dogs are experiencing when searching for explosives. If the dog meets the necessary characteristics, it is discarded and does not fall into the kennel.

As we told the guide at the police kennel, Lieutenant Colonel and Director of the public Association “Kennel Department” Leonid Musevich, in the history of cynological centers of Ukraine were the years when civilians were trying to take there adult Rottweilers. “There was a certain fashion for Rottweilers. But due to improper training, such dogs often become unmanageable, and civil was looking for an opportunity to give their professional handlers. The main thing — remember: if you spend time to correction in education, we can work together and with the dog breed”. 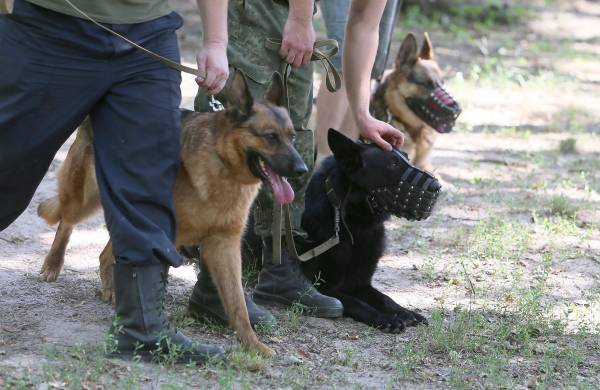 Tailed trio. A moment of rest from work

On the Internet, where they communicate with each other handlers, recently there have been reports and videos in the near abroad, there are persons involved in working with wolves. On such video shows that wolves do not bring the person to the animal that is on a leash, the helper suitable for himself, putting his hand in a protective shield. However, experts say that to train a wolf from an animal suitable for the detention of the offender, it is too difficult — the wolf is very hard to training, but a cross between a grey dog, perhaps, can be used as a good animal for the taking of a trace.

You can also find videos where dogs qualified as “Antiterror” show “aerobatics” — accompanying the dog, walking backwards, controlling the situation behind the host. When the horizon appears the helper to attack the handler, the dog instantly grabs the offensive player’s hand and eliminates the “raider”. Should the handler only once to instruct the dog as he releases the hand “raider” and dutifully runs up to the owner. Such success in taming can boast Israeli handlers. On their Internet resources, you can also find footage of security forces on special events bring four dogs on one decoy. One of them tries to grab the neck, the second in the back, the other two legs. In order not to harm the health of the helper, the dog natravlyayut muzzled. Despite this, they are in just a few seconds of the attack knocked the feet of the person involved, and the Israeli police command the dogs to stop the attack. If they do not execute the command, the dog urgently pulled away from the helper.